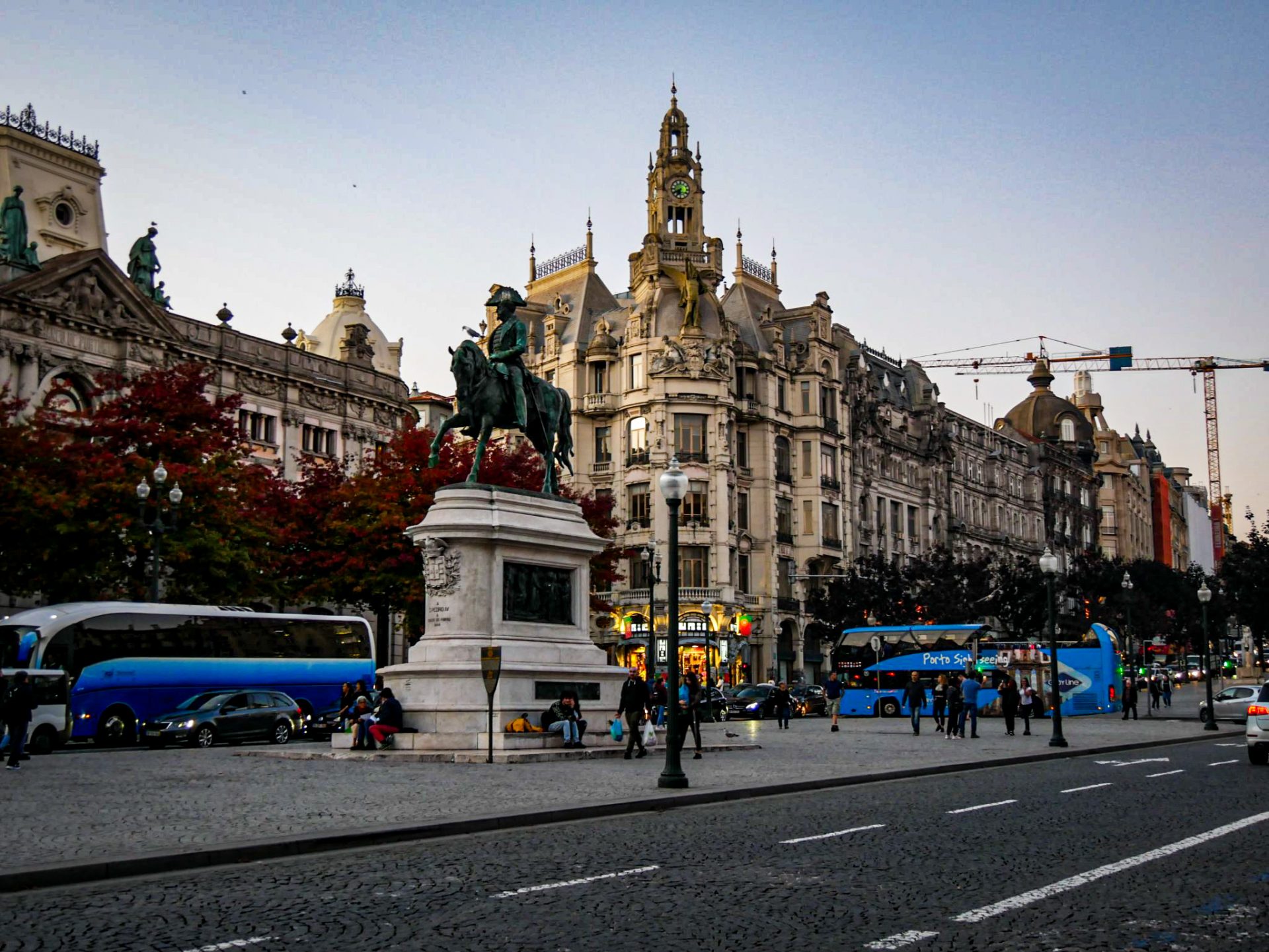 The Avenida dos Aliados in Porto

In the heart of Porto, the 250-meter-long Avenida dos Aliados connects the historic center and the modern districts of the city. It is a focal point pf Porto’s cultural life: great crowds regularly gather on the Avenida dos Aliados to celebrate major events (New Year’s Eve, Saint John’s Eve, the victories of FC Porto ⚽…).

In sunny weather, you’ll be able to sit for a nice refreshing drink at one of the many terraces which cover the Avenida dos Aliados, in the shade of the tall trees.

Brief history of the Avenida dos Aliados in Porto

While the city of Porto had long thought of building a grand avenue, the construction project of the Avenida dos Aliados (named after the Allies of the First World War) did not until 1916.

At the time, a tangle of small streets, the lavadouros (“laundries” in English) occupied the current location of the Avenida back Aliados. They were destroyed to make way for the brand new avenue. Large companies invested to build opulent buildings with flamboyant Art Nouveau facades along the Avenida.

Today, the majority of banks and insurance companies which were first housed in the Avenida’s sumptuous buildings have been replaced by luxury hotels, boutiques and restaurants.

Right in the center of Porto, the Avenida dos Aliados connects the Praça da Liberdade (Liberdade Square), a stone’s throw from Sao Bento Station, and the Praça do General Humberto Delgado, where the City Hall is located.

In the centre, a paved promenade (laid out by the Portuguese architect Alvaro Siza Vieira when the avenue was remodelled to make way for the the Aliados metro station) invite pedestrians to stroll quietly and admire the emblematic monuments that mark out this majestic avenue.

The most iconic monuments of the Avenida dos Aliados

Among the many buildings lining the Avenida dos Aliados, seven stand out:

Before leaving, be sure to have look at the statues dotting the Avenida dos Aliados :

Built between 1920 and 1955 and designed by the architect Correia da Silva, the City Hall ( Camara Municipal do Porto in Portuguese) stands at the far north end of Avenida dos Aliados, on the Praça do General Humberto Delgado.

The central tower of the City Hall, surmounted by a clock, stands 70 meters above the ground.

Getting to the Avenida dos Aliados

Located in the heart of Porto, a few steps from the Sao Bento train station, the Clerigos Tower and the Livraria Lello, the Avenida dos Aliados is easy to access on foot or by public transport.

You’ll find on the Avenida a metro station (the Aliados station), served by line D, a tram stop (Aliados), as well as many bus lines.

The hop-on hop-off tourist buses also make a stop on the avenue.

Porto’s Hard Rock Café is located in a small street perpendicular to the Avenida dos Aliados, the Rua do Almada.

And if you want to treat yourself to an exclusive stay in Porto’s city center, you will find here two very beautiful hotels:

⚓
Looking for tips to plan your vacation in Porto? You might find these articles of interest:
👉 A Guide to Porto: the best things to do
👉 Day-tours around Porto
👉 Visiting Porto with children
👉 Where to eat in Porto? The Captain’s restaurant recommendations
You can also find all of the Captain’s articles on Porto’s must-see sites and monuments here.

👉 Looking for tips and recommendations? Here are the Captain’s suggestions!