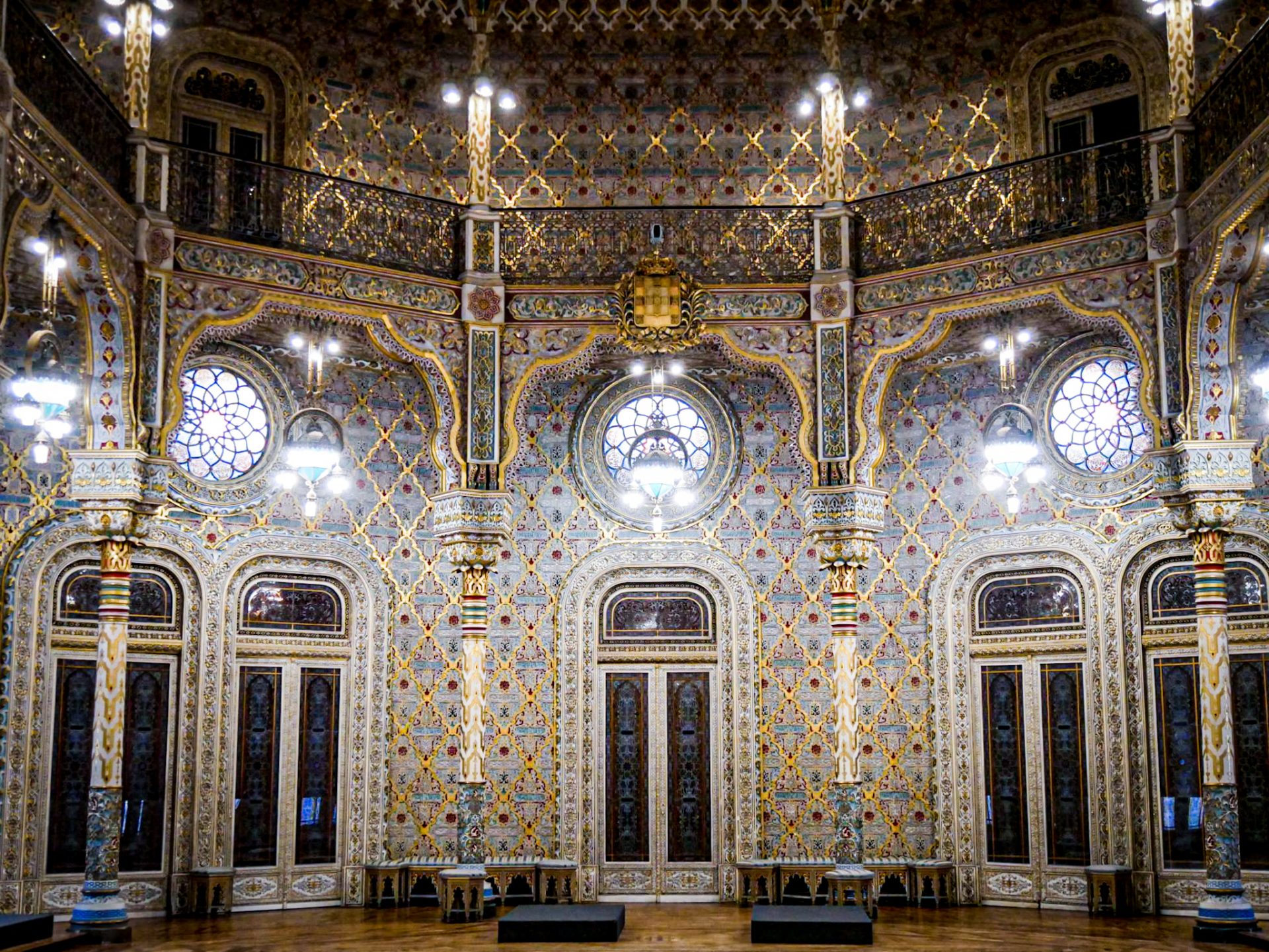 The Palacio da Bolsa (Stock Exchange Palace) is one of Porto’s most emblematic monuments. Follow the guide!

Brief history of the Palácio da Bolsa in Porto

The city’s commercial association, the Associação Comercial do Porto

The ancestor of the city’s commercial association was born in the 18th century, when the local merchants joined forces to create a guild.

In 1833, the guild became the Associação Comercial do Porto , the Commercial Association of Porto, which established rules similar to to a commerce code in order to arbitrate commercial disputes between its members.

Over time, the missions and prerogatives of the Association evolved until it eventually took on the role of Chamber of commerce and industry.

In 1841, Queen Maria II of Portugal donated the land on which the Palacio da Bolsa is built to the city’s commercial association.

The construction of the palace began the following year. Construction work was entrusted to the Portuguese architect Joaquim da Costa Lima, who incorporated both English and neo-classical influences in the design. The Palacio da Bolsa was inaugurated in 1891, but the construction was actually completed almost 20 years later, 1910.

The palace is now classified as a “National Monument” and is unanimously considered as one of the city’s most emblematic buildings.

While the Palacio da Bolsa is no longer the seat of the city’s stock exchange, it remains the property of the Chamber of Commerce and Industry and regularly hosts major events and gala evenings.

For this reason, the number of visitors is limited and visitors cannot freely explore the palace: all visitors must join a guided tour (available in several languages), which can be booked at the ticket office or online (more on that further in the article 😉).

The available slots tend to fill up quite quickly, especially during high season. Captain Ulysses therefore recommends booking your guided tour the day before or early in the morning.

Before starting your visit to the Palacio da Bolsa, be sure to check out the Commercial Law Library ( Biblioteca da Direito Commercial in Portuguese), which is located opposite the ticket office, at the entrance to the palace.

The visit to the Palacio da Bolsa begins on the ground floor, in the gallery running around the Nation’s Courtyard (Pátio das Nações in Portuguese). This vast central courtyard was originally an open sky patio; it is now surmounted by a large octagonal glass roof with a metal frame designed in 1880 by the architect Tomás Soler.

You might notice a series of 25 civil coats of arms: they represent the 25 nations that Portugal was closest to at the time when the Palacio da Bolsa was built, both commercially and culturally.

In the west gallery, the Grand staircase leads to the upper floor of the Palacio da Bolsa.

Built in marble and granite, this imposing staircase was designed by architect Gonçalves e Sousa in 1868 and is adorned with sculptures by artists António Soares dos Reis and António Teixeira Lopes.

Don’t forget to look up to take a look at the ceiling frescoes, created by António Ramalho.

On the first floor of the Stock Exchange Palace, the Tribunal Hall (Sala do Tribunal) is adorned with woodwork reminiscent of the style of the French Renaissance. The walls are decorated with various allegories while that the fresco painted on the ceiling represents the Commercial Association of Porto, whose motto stands out: “Lex et Iusticia” (“Law and Justice”).

The deliberation of the jurors took place in this room.

The President’s Room (Sala do Presidente) comprises an antechamber as well as the office of the President of the city’s commercial association. The inlaid parquet floor of the office is quite stunning.

The Golden Room ( Sala Dourada in Portuguese) — which served multiple purposes — is named after its ceiling, decorated with gold leaf.

The General Assembly Hall (Sala das Assembleias Gerais) still hosts the general assembly of the city’s commercial association, which is held once a year.

If the walls seem to be covered in wood, it’s actually an illusion. Take a good look… the coating is in reality plaster.

The Venetian glass chandelier hanging from the ceiling is quite striking.

The Portrait Room (Sala dos Retratos) is named to the portraits of the last six kings of the Dynasty of Braganza, which adorn its walls.

The room is richly decorated with precious furniture, including a marquetry table and Louis XVI style sofas.

Last stop on the tour, the Arab Room (Salão Árabe) is undoubtedly the jewel of the Palacio da Bolsa. Built between 1862 and 1880 by the architect Gonçalves e Sousa (who also designed the palace’s grand staircase), the Arab Room was inspired by the Alhambra in Granada.

This sumptuous 300-square-meter reception room is covered with stucco decorated with gold leaf… a total of 18 kilos of gold were necessary!

Getting to the Stock Exchange Palace

The Palacio da Bolsa is located in the historic center of Porto, a 3-minute walk from the banks of the Douro and about ten minutes from the Clerigos Tower.

The Palacio da Bolsa is open:

Please note that the visit to the Palacio da Bolsa is guided and the slots fill up quickly. Several tours in are available per day. Captain Ulysses highly recommends booking your guided tour in advance, especially during the high season.

👉 To book your tour: tickets for the Palacio da Bolsa

The guided tour of the Palacio da Bolsa is €10 full price, €6.50 reduced price. The visit is free for children under 12 years old.

⚓
Looking for tips to plan your vacation in Porto? You might find these articles of interest:
👉 A Guide to Porto: the best things to do
👉 Day-tours in the surroundings of Porto
👉 Visiting Porto with children
👉 Where to eat in Porto? The Captain’s restaurant recommendations
You can also find all of the Captain’s articles on Porto’s must-see sites and monuments here.