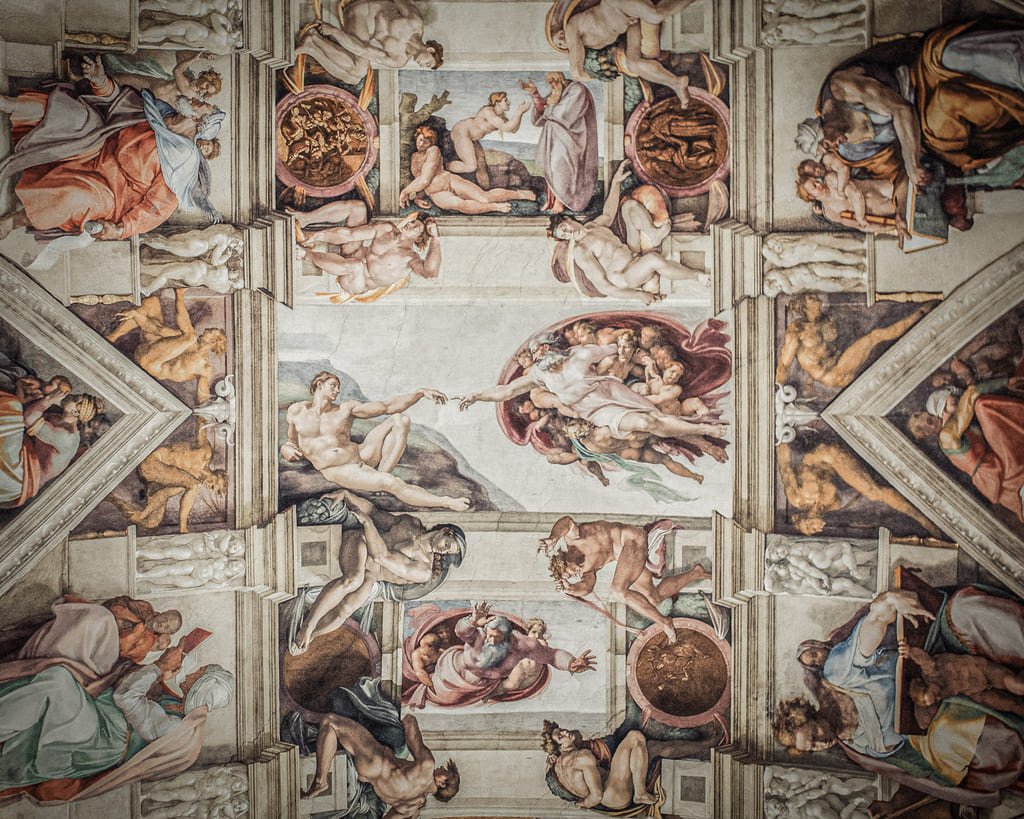 The Vatican Museums And The Sistine Chapel In Rome

Nestled in the Vatican Palace, the Vatican Museums – which house, among other wonders, the incomparable Sistine Chapel – are high on the list of the most emblematic museums in the world!

The Vatican Museums in a nutshell

Brief history of the Vatican Museums

Let’s go back in time, shall we? Our destination? The 16th century!

When he was elected pope in 1503, Julius II had his private collections (including the Apollo of Belvedere and the Laocoon Group) moved to the Vatican Palace: the Vatican Museums were born.

In the following centuries, the successors of Julius II continued his work and gradually enriched the Vatican collections.

Thanks, among other things, to numerous donations, the Vatican collections received countless ancient remains (Greek, Roman, Etruscan and Egyptian), master paintings, statues, tapestries, etc., so much so that five centuries after their creation, the Vatican Museums are among the largest museums in the world!

With more than 6 million visitors per year, the Vatican Museums are also the 3rd most visited museum in the world.

If you have to visit only one museum in Rome, it is this one (… even if Captain Ulysses warmly recommends visiting the Borghese Gallery and the Capitoline Museums)!

The Vatican Museums are:

Visiting the Vatican Museums and the Sistine Chapel

It is quite difficult to see clearly in the midst of such a profusion of works of art and ancient remains!

You won’t be able to see it all and will have to select the works of art and exhibition rooms that you don’t want to miss. That being said, here are Captain Ulysses’ favourites in the Vatican Museums!

Attention, all art lovers! The Pinacoteca is undoubtedly one of Captain Ulysses’ greatest favourites in the Vatican (… and even in Rome)!

You’ll find in the Pinacoteca a multitude of emblematic paintings dating from the Middle Ages to the early 19th century.

Need we remind you? Yes, it is indeed in the Vatican Museums that you’ll find the incomparable Sistine Chapel.

The conclave (formed by the cardinals) meets upon the death (or resignation) of each pope to elect his successor in this iconic chapel, under the incredible ceiling painted by Michelangelo.

Built at the end of the 15th century, the Sistine Chapel was adorned by some of the greatest artists of the time: Botticelli, Perugino… and of course Michelangelo, who painted the ceiling fresco depicting scenes from Genesis between 1508 and 1512, and the Last Judgmentfresco on the altar wall (at the back of the chapel) between 1535 and 1541.

Created by Popes Clement XIV and Pius VI (hence its name) in the 18th century, the Pio-Clementino Museum is a must-see for visitors exploring the Vatican Museums.

Dedicated to Greek and Roman statuary, the museum houses some of the Vatican’s most emblematic sculptures: the Belvedere Torso, the Apollo of Belvedere and the Laocoon Group.

The Borgia Apartments and the Collection of Modern Religious Art

It is in these appartments, created in the 15th century for the infamous Pope Alexander VI (Rodrigo Borgia) and his family, that you will find part of the Vatican’s Collection of Modern Religious Art.

The Borgia Apartments comprise 6 rooms richly decorated by Pinturicchio and his disciples:

The Vatican Museums’ Collection of Modern Religious Art is heaven on earth for all modern art lovers!

The Borgia Appartments will no doubt turn the heads of even the most demanding visitors!

The Gallery of Maps

The Gallery of Maps is undoubtedly one of the most surprising – and photogenic – places in the Vatican Museums.

This vast 120-metre long gallery exhibits forty huge topographical maps dating from the 1580s and representing the Italian regions and the Church territories in the 16th century.

Unsurprisingly, this is one of Captain Ulysses’ favourite points of interest in the Vatican… but no need to be a seasoned sailor to appreciate the Gallery of Maps!

Located in the public part of the papal appartments, the Raphael Rooms are a series of rooms painted between 1508 and 1525 by the incomparable Rafaello Sanzio (Raphael) and his disciples. There are four rooms, each named after the frescoes painted on the walls:

The Raphael Rooms are unanimously considered to be among the most emblematic masterpieces of the Vatican Museums… and Captain Ulysses can only agree!

Built in the early 1930s by Italian architect Giuseppe Momo, the Bramante Staircase (also known as the Giuseppe Momo Staircase) is a huge spiral staircase inspired by a double helix staircase designed in the Renaissance by the architect Bramante (hence its name).

The double helix ensures that visitors can go up and down the stairs without passing those going the other way!

Getting to the Vatican Museums

The Vatican Museums are located within the Vatican City State, a few steps from St. Peter’s Square, St. Peter’s Basilica and Castel Sant’Angelo.

The nearest metro station is Cirpo-Musei Vaticani on line A. Many buses, including hop-on hop-off sightseeing buses, also stop near the Vatican Museums.

Opening hours of the Vatican Museums

They are closed on religious holidays.

Tickets to the Vatican are €17 full price, €8 reduced price. Tickets can be booked in advance for a supplement of €4.

You should also know that skip-the-line access to the Vatican Museums and the Sistine Chapel is also included in the Omnia Card and the Rome Tourist Card.

Queues at the entrance to the Vatican Museums can be absolutely endless: you may have to wait for 3 or 4 hours if not more, especially during the high season and the school holidays.
Captain Ulysses can only recommend that you opt for a skip-the-line ticket : trust his experience, it’s worth it!

Find out more: skip-the-line for the Vatican Museums

Guided tour of the Vatican Museums

To avoid getting lost in the maze of rooms and corridors of the Vatican Museums, to avoid missing any of the must-see works and to avoid the endless queues, Captain Ulysses strongly recommends that you take a guided tour!