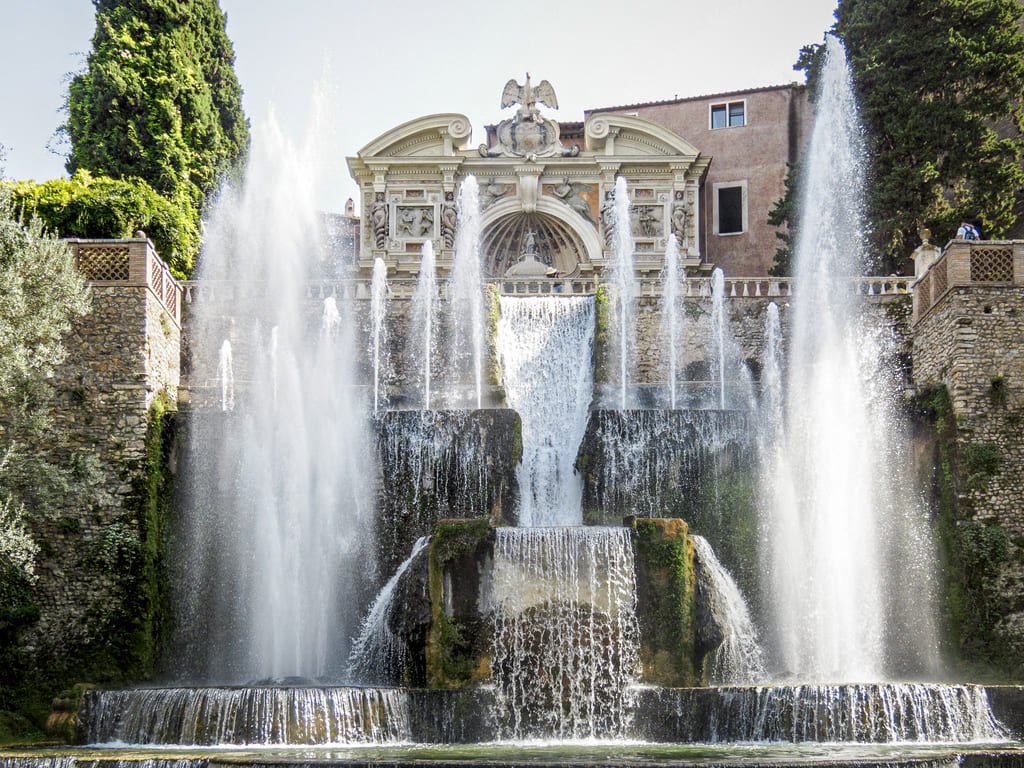 The Villa d’Este in Tivoli near Rome

Listed as a UNESCO World Heritage Site, the Villa d’Este is an absolute gem! Its mannerist architecture, its lush terraced gardens and its spectacular fountains make it a must-see for any visitor exploring Rome and its surroundings! . 👉

Brief history of the Villa d’Este

The origins of the Villa d’Este

The history of the Villa d’Este begins in the 16th century: offended at not having been elected pope, Cardinal Hippolyte d’Este decided to build in Tivoli a villa which would rival the most spectacular buildings of its time.

The cardinal, appointed Governor of Tivoli, wanted to make the Villa d’Este a cultural center on a par with the courts of Rome, Ferrara and Fontainebleau.

To carry out his great project, the cardinal surrounded himself with some of the most renowned artists and technicians of the time: the architect Pirro Logorio, the painter Livio Agresti, as well as the hydraulic engineers Tommaso Chiruchi and Claude Venard.

Hydraulic engineers? Yes, the cardinal wanted his palace to be surrounded by terraced gardens dotted with hundreds of fountains!

A colossal project which was restored several times over the next century, notably by the emblematic sculptor Gian Lorenzo Bernini, who designed the most impressive fountain in the Villa d’Este: the Fontana di Nettuno (Fountain of Neptune).

The Villa d’Este in the 18th and 19th centuries

During the 18th century, the Villa d’Este unfortunately gradually fell into oblivion, until it became the property of Cardinal Gustav Adolf von Hohenlohe in the 19th century. The Cardinal decided to restore the villa to its former glory and once again make it a radiant cultural centre. The composer Franz Liszt was invited in the Villa d’Este on several occasions and composed Les Jeux d’eaux at the Villa d’Este and Les Cyprès de la Villa d’Este.

The Villa d’Este since WWI

During WWI, the Villa d’Este was requisitioned by the Italian army and converted into a garrison.

In the 1920s, the Villa d’Este, which had become a national property, was opened to the public. In the aftermath of the Second World War during which it was partly destroyed in several bombings, the Villa underwent major renovation work.

In 2001, the Villa d’Este and its gardens were listed as a World Heritage by Unesco. The site remains today one of the finest examples of Renaissance gardens in the world.

The Villa d’Este is located in Tivoli, as is the stunning Villa Adriana (aka Hadrian’s Villa). Most visitors therefore decide to combine the visit of both sites on a day-tour to Tivoli.

If the Villa d’Este is famous for its gardens more so than for its architecture, the palace nevertheless deserves a few moments of attention.

A very fine example of Baroque architecture, it is decorated with impressive Mannerist frescoes which are incredibly well preserved.

Mannerism is a pictorial movement that appeared in the 1520s and is defined by a release from the constraints set by Renaissance artists, including, among others, the rule of the imitation of nature. Mannerism indeed claimed a certain technical refinement as well as the highlighting of artifice.

The gardens of the Villa d’Este

The gardens are no doubt the highlight of the visit.

Built in terraces, they spread over no less than 4.5 hectares (10 acres) and are dotted with some 500 fountains and statues.

While it may seem incredibly sophisticated, the hydraulic network supplying the fountains with water is inspired by the engineering of ancient Rome and is in fact essentially based on the principle of gravity.

While visiting the gardens, don’t miss:

There’s only one rule in the Villa d’Este: take the time to stroll peacefully, far from the noise and the hustle and bustle.

Opening hours of the Villa d’Este

The Villa d’Este is closed on Monday mornings. Opening hours vary depending on the time of year:

Admission tickets to the Villa d’Este are 10 € in full price and 2 € for young adults aged 18 to 25. Admission is free for visitors under 18.

Getting to the Villa d’Este / Tivoli from Rome

The Villa d’Este is located in the center of Tivoli, some thirty kilometers from Rome.

Visitors have several options to get to the Villa:

To get to Tivoli, the Captain recommends taking the bus rather than the train (Tivoli train station is further from the city center than the bus stop, which is located a stone’s throw from the Villa d’Este).

If you’d rather avoid a series of bus journeys (Rome – Tivoli (Villa d’Este) then Tivoli – Hadrian’s Villa then Hadrian’s Villa – Rome), the Captain advises you to opt for an organized day-trip.