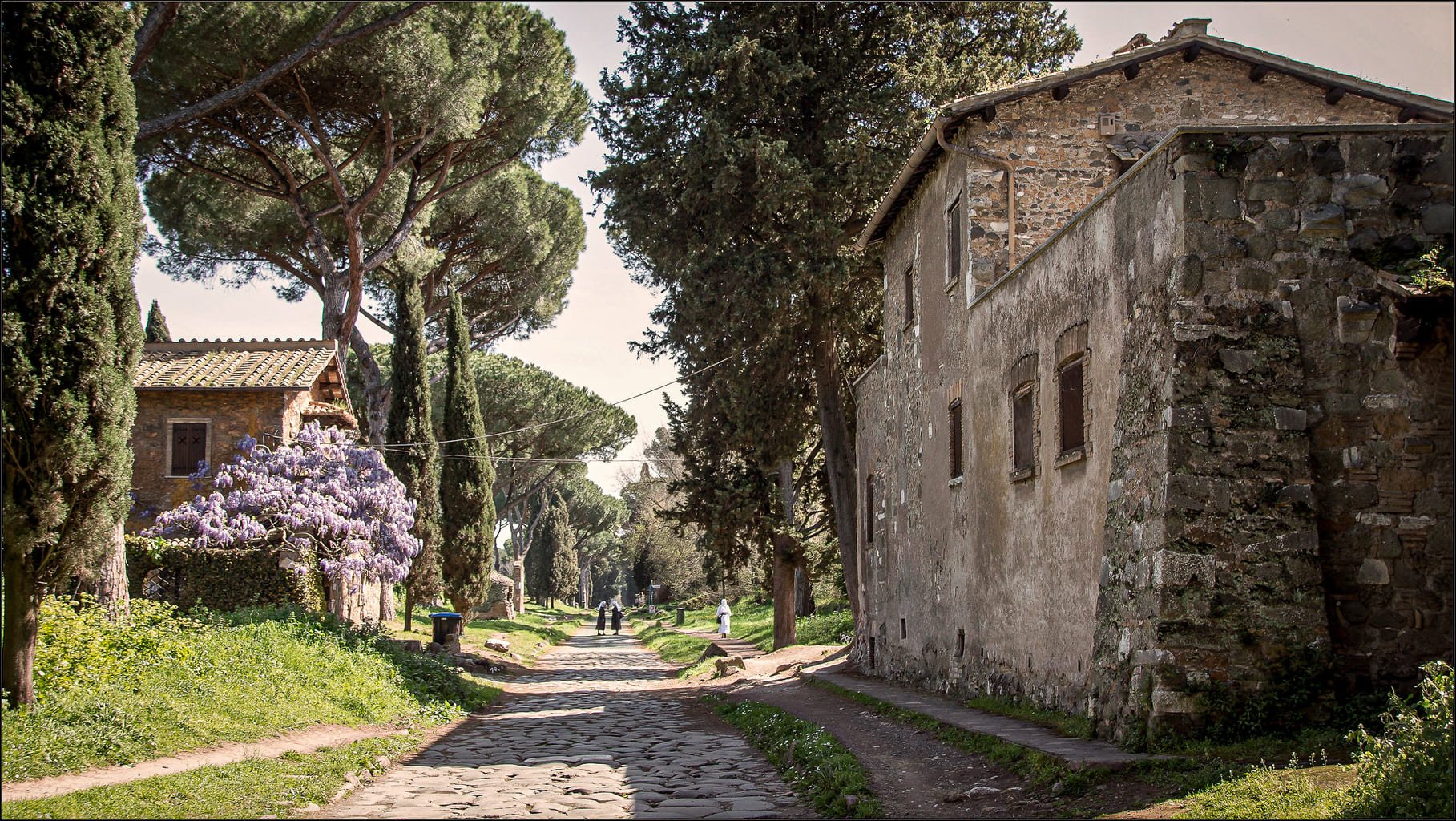 The Appian Way in Rome

Want to take a breath of fresh air between two visits to the historic center of Rome? A world away from the city’s hustle and bustle, the Appian Way (or Via Appia Antica) is one of the Captain’s favourites in the Italian Capital!

Brief history of the Appian Way

The origins of the Appian Way (Via Appia Antica)

The Appian Way was created in 312 BC at the request the censor (= Roman magistrate) Appius Claudius Caecus, after whom it was named.

Originally linking Rome to Capua (in Campania), the Appian Way was gradually extended and eventually reached Brindisi, in Apulia (in the heel of the Italian boot).

Why build the Appian Way? To link the capital to the south of Italy in order to strengthen its influence in the region and facilitate the transport of soldiers and goods.

Paved with large slabs, the Appian Way was 4.10 metres / 13.1 ft wide, allowing two chariots to pass each other without hindrance. It was bordered by dirt paths reserved for pedestrians.

The catacombs and mausoleums of the Appian Way

In Ancient Rome, burying the dead within the city walls was forbidden. The cemeteries, burial grounds and catacombs were therefore all located “outside the walls”. This explains why the Appian Way is lined with funerary monuments and catacombs, some of which are still open to visitors today.

The Appian Way since antiquity

After the fall of the Roman Empire, the Appian Way gradually fell into disuse. In the Middle Ages, it was used only by pilgrims travelling to southern Italy to reach the Holy Land.

In the 18th century, Pope Pius VI ordered its restoration, particularly because many Christians – including popes – were buried along the Appian Way (in funerary monuments or catacombs).

Today, the Via Appia Antica is part of a protected national park covering 3500 hectares at the gates of Rome. Lined with pine trees, cypresses and historical monuments, the ancient Roman road has all the makings of a picture-postcard landscape.

Follow Captain Ulysses on a tour of the main sites and points of interest along the Appian Way!

The sites and monuments of the Appian Way can be somewhat distant from each other. Many visitors therefore choose to rent bikes (traditional or electric) in order to explore this ancient route.

You’ll find all the Captain’s recommendations (bike rental, guided tour…) a little further down in the article.

Located in Rome and incorporated into the Aurelian Wall – a fortified enclosure built to protect the city during antiquity – the Porta San Sebastiano (or Porta Appia) marks the beginning of the Appian Way.

The catacomb of Saint Callixtus

Further along the Via Appia Antica, the catacombs of San Calixtus are some of the largest and most emblematic catacombs in Rome.

Founded in the 2nd century AD, they spread on no less than 15 hectares / 40 acres, on four levels (of which only a small part is open to visitors). Sixteen popes and many Christian martyrs were buried there.

Visitors cannot explore the site freely and must join a guided tour if they want to visit the catacombs of St Callixtus.

If you’re visiting Rome during the high season (summer and school holidays), Captain Ulysses definitely recommends booking your guided tour in advance to avoid wasting time in the queue:official guided tour of the catacombs of St. Callixtus

The remains of Saint Sebastian were deposited in the catacombs in 350 where they remained until the 9th century, when they were transferred to the Vatican for protection as the Saracen army was closing in on the city.

According to legend, the remains of St. Peter and St. Paul were also briefly kept in the catacombs before being respectively transferred toSt. Peter’s Basilica and St. Paul’s Basilica.

The Basilica of San Sebastiano was completely rebuilt in the 17th century by the architects Flaminio Ponzio and Giovanni Vasanzio.

The Basilica of St Sebastiano Fuori le Mura is one of the seven churches where the traditional Jubilee pilgrimage is held.

The entrance to the catacombs is located in the basilica.

The Circus of Maxentius

Constructed in the 4th th century by Emperor Maxentius, the Circus of Maxentius was a sprawling horse and chariot racing arena. Despite its size, it could only hold 10,000 spectators, which pales in comparison to the Circus Maximus, which could seat up to 150,000.).

Although only remnants remain today, the Circus of Maxentius was once part of a grand complex that included a palace and a memorial for the Emperor’s son, Romulus.

The Tomb of Cæcilia Metella

Built in the 1st century AD, the Mausoleum of Cæcilia Metella is probably the best preserved funerary monument on the Appian Way.

It was built to protect the remains of Cæcilia Metella, daughter-in-law of Crassus (member of the Triumvirate alongside Julius Caesar and Pompey).

The mausoleum is cylindrical in shape and impressive in its dimensions: almost 30 metres (100 ft) in diameter and 11 metres (36 ft) high. It was turned into a fortress in the Middle Ages.

Situated a little further along the Appian Way, the Villa Quintili is an ancient residence built by the Quintilius brothers in the 2nd century AD. The latter were condemned to death by the Emperor Commodus who confiscated the villa before being assassinated… in this very villa.

Visitors have two options to explore the Appian Way:

Guided tours of the Appian Way (on foot or by bike)

If you don’t want to miss any of the points of interest of the Appian Way, Captain Ulysses recommends two guided tours:

Visiting the Via Appia Antica on your own

Getting to the Appian Way

Unless you love to walk, Captain Ulysses recommends taking the bus (lines 118 or 218 near Piazza Venezia). You’ll arrive directly at the catacombs of San Calixtus. The first part of the Appian Way (before the catacombs) is not pedestrianised and is of little tourist interest.

From there, you’ll be easily able to rent bikes.

Please note that unlimited access to public transport is included in the Roma Pass and Omnia Card. Find out more here.

Bike rental on the Appian Way

Want to rent bikes to explore the Appian Way? You can get your bikes here: Via Appia Antica bike rental (electric, mountain, or city bikes available).

The staff speaks English as well as several other languages.

How long will it take to explore the Appian Way?

Captain Ulysses recommends that you allow at least ½ day if not a full day to visit the Via Appia Antica.