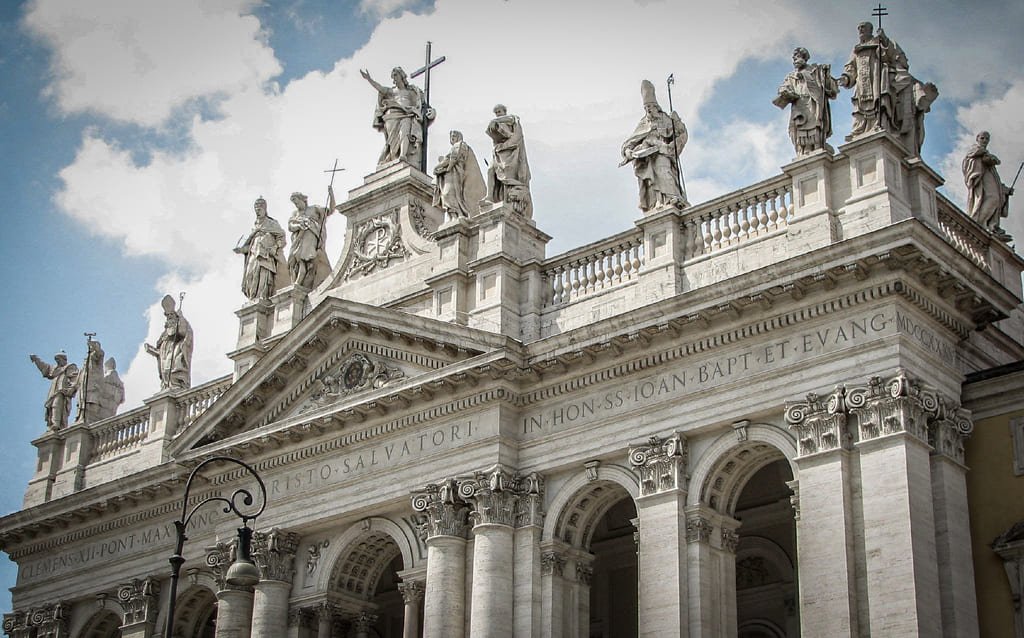 The Basilica of St. John Lateran in Rome

Perched on Mount Lateran, the Archbasilica of Saint John Lateran (Basilica of San Giovanni in Laterano) is one of the four major papal basilicas.

Built some 17 centuries ago, it is the oldest Christian building in the West. Be sure to have a look at the inscription engraved on its pediment: Omnium urbis et orbis ecclesiarum mater et caput (= Mother and head of all the churches of the city and of the world).

Brief history of the Basilica of St. John Lateran

Foundation of the basilica

In 313 AD, Emperor Constantine promulgated the Edict of Milan which established a period of tolerance for Christians following the persecutions of the previous centuries.

Eleven years later, the Basilica of St John Lateran was the first church to be officially consecrated in Rome by Pope Sylvester I.

🧐 Where does the basilica get its name from?🧐

Although its official name is “Cathedral of the Most Holy Savior and of Saints John the Baptist and John the Evangelist”, the Basilica is known to all as the Basilica of St John Lateran, in reference to the Lateran hill on which it is built. The Basilica is located next to the Lateran Palace, which was the residence of the popes from the 4th to the 14th century.

The Lateran Hill was named after the Laterani family who owned the land during Antiquity.

The seat of the Bishop of Rome

From the 4th to the 14th century, the Lateran Palace, next to the basilica, was the official residence of the popes in Rome.

During this period, the basilica suffered several earthquakes, lootings and fires and therefore had to be partly rebuilt and restored several times. The Romanesque cloister was built between the 12th and 13th centuries.

From 1309 to 1377, the popes left Rome for Avignon in France. On their return to Italy, they abandoned the Basilica and the Lateran Palace, which were in too poor a state, and moved to the nearby St Peter’s Basilica in the Vatican. The Basilica of St. John Lateran remained however the seat of the bishop of Rome. The Holy Thursday service continued to be celebrated by the Pope in the Archbasilica of Saint John Lateran every year.

Major renovations in the 17th and 18th centuries

The Basilica of St. John Lateran as we know it today – especially the interior layout and ornaments – is largely the result of renovation works carried out by Italian architect Francesco Borromini at the behest of Pope Innocent X.

The travertine façade was designed by architect Alessandro Galilei in the early 18th century. Around the same time, the doors of the Curia (the former seat of the Roman Senate) were also moved from the Roman Forum to the Basilica of Saint John Lateran.

Following the financial contributions of the Kingdom of France to help restore and maintain the Basilica of St John Lateran between the 15th and 19th centuries, the King of France was appointed in the early 16th century as the “first and only honorary canon” of the Basilica.

Despite the cessation of French contributions in the 19th century, the head of the French state still retains this honorary title today.

The exterior of the Basilica of St John Lateran

First stop outside the basilica. Built in the 18th century, the baroque travertine façade is the work of architect Alessandro Galilei. It is adorned with 15 monumental statues, 7 metres (23 ft) high, representing Jesus, St John the Baptist and St John the Evangelist, surrounded by twelve Doctors of the Church (baptised men and women recognised by the Church for their authority in the field of theology).

The façade also comprises five doors, including the doors of the Curia as well as the Holy Door (to be found in each of the four major basilicas in Rome), which are only opened once every 25 years to mark the beginning of the Holy Year.

Built in the 2nd half of the 16th century, the Renaissance facade overlooking St. John Lateran Square is well worth a look with its loggia and its 13th century bell towers.

⚓ Attention, sailors! ⚓
Want to find out more about Rome’s top landmarks, activities & museums? Why don’t you check out the Captain’s detailed article on the best things to do in Rome?

The interior of the Basilica of St John Lateran

The interior of the Basilica is Baroque in style and is the result of major renovation work entrusted to Francesco Borromini by Pope Innocent X on the occasion of the Jubilee (Holy Year) of 1650.

The nave: surmounted by a coffered ceiling dating from the 16th century, the central nave counts a total 12 niches housing statues of the apostles. The pavement, with its geometric motifs in cosmatesque marble, dates back to the medieval period.

The apse and choir: the apse is decorated with a beautiful mosaic dating back to the 4th century, but largely renovated in the 13th and 19th centuries. This is where you will find the papal throne.

Built in the 13th century, the cosmastesque cloister (admission charge) has withstood disasters (fires, earthquakes) and the test of time. Its small garden and its beautiful spiral columns are well worth a visit.

The octagonal early Christian baptistery is located outside the basilica. Built in the 3rd century, it was later restored in the 5th century, making it one of the oldest known baptisteries. The interior is decorated with red porphyry columns and ancient mosaics.

efore you leave, be sure to take a look at the Scala Santa (Holy Stairs), located in front of the Basilica in Piazza San Giovanni di Latran. According to Christian tradition, these stairs were brought from Pontius Pilate’s palace in Jerusalem and are said to be the stairs climbed by Christ before he was judged.

Located in the Piazza San Giovanni Laterano, the Lateran Obelisk is a 36-metre /118-feet high Egyptian obelisk brought to Rome by Constantine in the 4th century. Originally erected in the Circus Maximus, the obelisk was moved to its present location at the end of the 16th century by order of Pope Sixtus V.

Getting to the Basilica of St. John Lateran

Opening hours of the Basilica of St. John Lateran

The Basilica of St John Lateran is open daily from 7am to 6.30pm.

Entrance to the basilica is free but you’ll have to pay €2 to access the cloister.