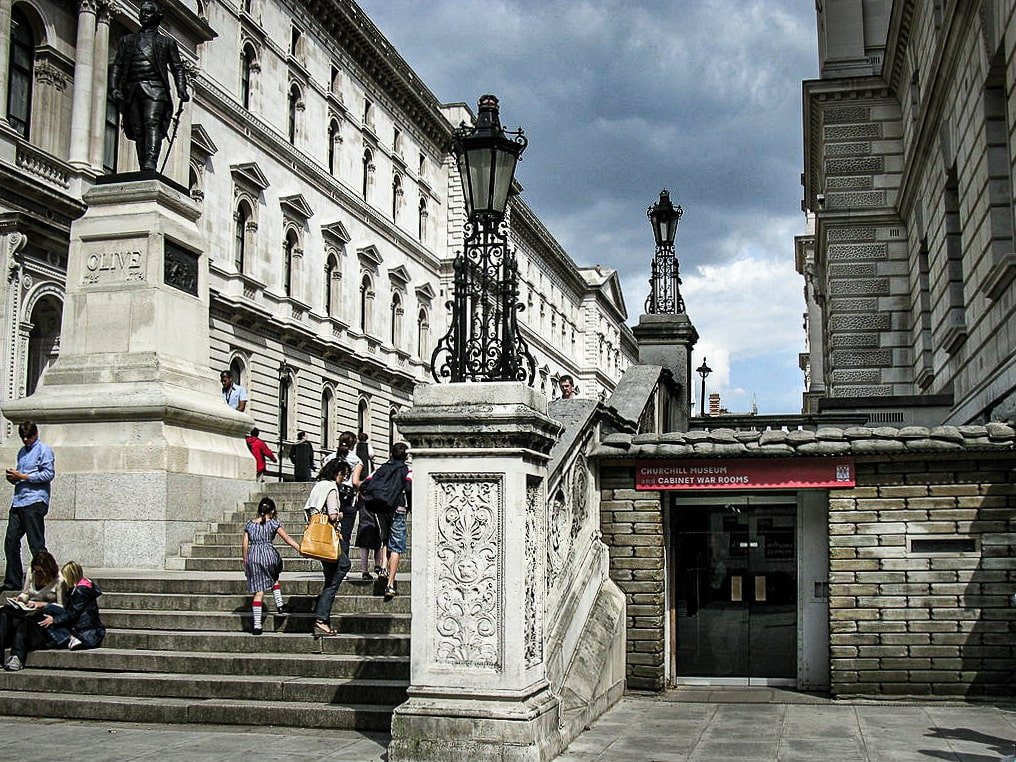 The Churchill War Rooms in London

In the heart of Westminster, a short walk from Downing Street, the Churchill War Rooms invite visitors on a journey through history to discover the secret bunker where Winston Churchill set up his command post during the Second World War.

The bunker before the war

At the end of the 1930s, the need to build secret underground headquarters in London where the political and military powers could take refuge if war were to be declared became more and more pressing.

The construction of the secret command post began in 1938 under the British Treasury building, Whitehall, and was completed on August 27, 1939, a week before Britain declared war on Germany.

Churchill’s bunker during the war

In October 1939, Prime Minister Neville Chamberlain held the first war council in the War Rooms. Following his election in May 1940, Churchill, now Prime Minister, took over the War Rooms to direct the war effort underground, sheltered from German bombing.

The same year, during the London Blitz, the walls were reinforced with concrete (some are 1.50 meters thick), and the infrastructures were extended the following year to accommodate new offices and dormitories.

If Churchill had his very own bedroom in the War Rooms, he rarely slept in the bunker during the war and mostly preferred to return to 10 Downing Street.

In August 1945, the Japanese surrender marked the end of the war: the Churchill War Rooms were closed and Churchill and his advisors are finally were able to rule the country from more convential offices, in broad daylight!

The Churchill War Rooms after the war

Three years after the end of the war, the Churchill War Rooms became a national monument. But the bunker was open to the public much later, in 1984.

The Churchill War Rooms are divided into two distinct spaces:

The Cabinet War Rooms comprise some thirty rooms which visitors are free to explore to discover the daily life of Winston Churchill and his advisers during World War II.

Some rooms are particularly striking.

115 strategic meetings were held in this very room between 1940 and 1945. When he first entered this room the day after he was elected Prime Minister, Churchill is said to have declared: “this is the room from from which I will lead the war”.

The Map Room is one of the most striking rooms in the Churchill War Rooms.

Here, army officers followed at all hours the advance of the troops around the world to provide detailed reports to Churchill, as well as to the king and the chiefs of staff.

The maps currently exhibited in the Map Room are authentic and are the very same that British officers were working on when the Japanese army surrendered in 1945.

This tiny room may not look like much at first sight (believe it or not, it’s actually an old broom closet!), but it did play a key role during the Second World War.

The Transatlantic Telephone Room indeed allowed Winston Churchill to have a direct and secure line to contact his American counterpart Franklin Roosevelt.

Churchill’s bunker corresponds to the living quarters of Churchill and his advisors. Churchill’s wife, Clementine Churchill, even had her very own room.

Adjacent to the Prime Minister’s bedroom, a small room appointed with broadcasting equipment allowed Churchill to address the entire nation in speeches transmitted by the BBC. The Prime Minister adressed the nation on 4 different occasions from this small room during the war.

Ludic and interactive, the Churchill Museum is dedicated to the long life of the iconic British Prime Minister, from his childhood to his death in January 1965 at the age of 90.

‘We are all worms, but I am convinced that I am a glow worm’
Winston Churchill

Getting to the Churchill War Rooms

To discover the Churchill War Rooms, head to the heart of the district of Westminster, in Whitehall, a short walk from Downing Street.

ℹ️ For information ℹ️
The Churchill War Rooms are easily accessible to visitors with reduced mobility.

Captain Ulysses recommends allowing at least one hour and a half for the visit, more if you want to take your time!

💵 🤩 👍 London Pass & London Explorer Pass 👍 🤩 💵
Access to the Churchill War Rooms is also included in the London Pass and the London Explorer Pass. Captain Ulysses tends to prefer the former, which includes access to 80 attractions, among which many of London’s most iconic monuments and museums (The Tower of London, The Shard, Westminster Abbey, Kensington Palace, the London Bridge Experience, Windsor Castle, a cruise on the Thames, a day of sightseeing in a hop-on hop-off bus, etc): an investment that will no doubt pay off if you’re staying a few days in London!

If visiting the Churchill War Rooms isn’t enough to satisfy your insatiable curiosity and you want to know more about the emblematic Prime Minister, Captain Ulysses recommends going on a guided tour following Churchill’s footsteps.

The Captain recommends this tour in particular: guided tour of Westminster and the Churchill War Rooms.

And the most avid history buffs might be interested in this tour departing from London and going to Churchill’s Kent home: Chartwell House: Winston Churchill’s Home Tour.