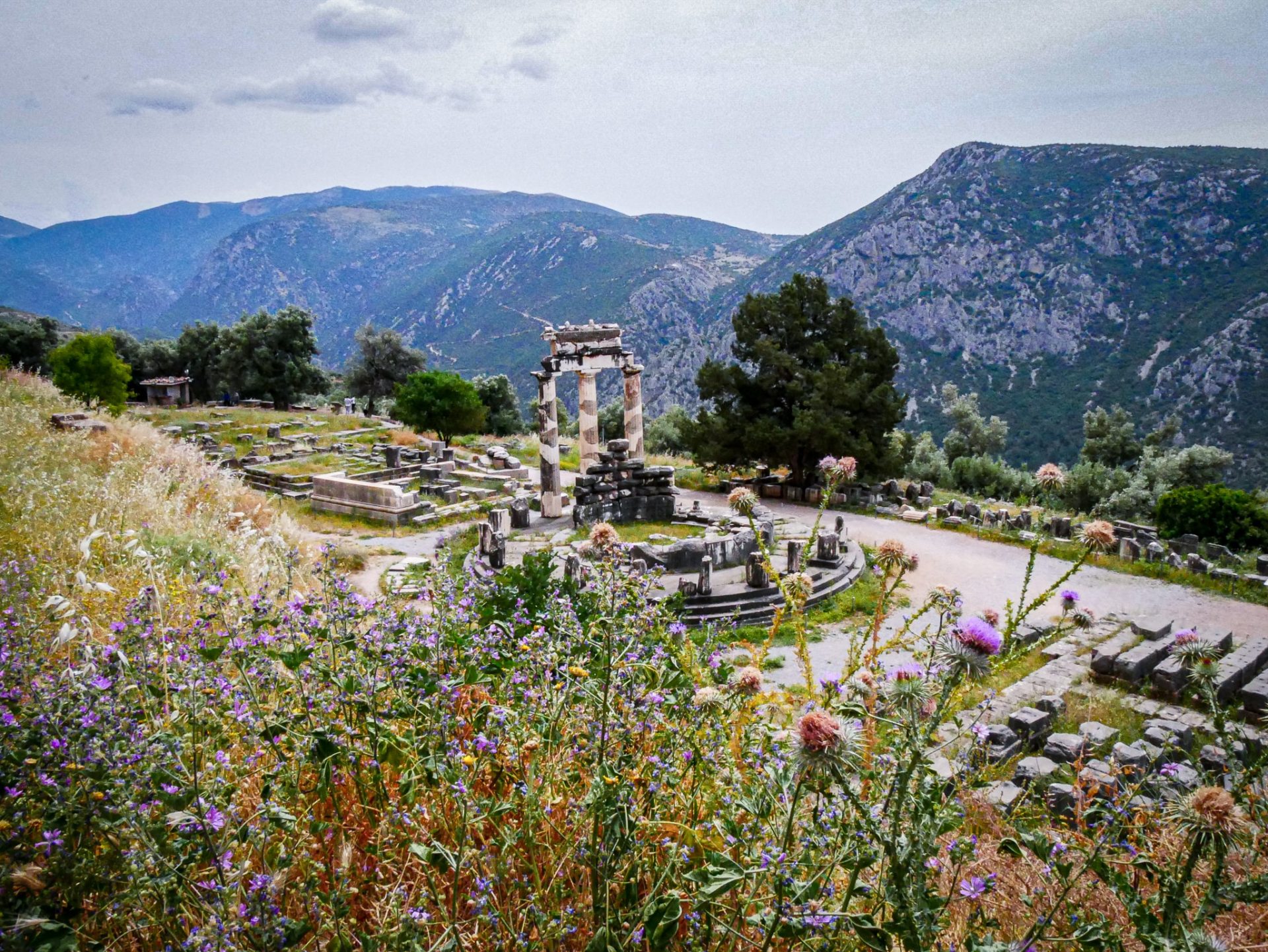 The Archaeological Site of Delphi

Perched on the southern flank of Mount Parnassus in central Greece, the sanctuary of Delphi is one of the country’s most iconic archaeological sites.

⚓
How to get to Delphi? Where to stay near the ancient site?
Find all the practical information as well as tips from the Captain at the end of the article!

– Delphi, the center of the world

According to legend, the “navel of the world”, the omphalos, is located in Delphi.&nbsp; In ancient times, Zeus was said to have released two eagles on both sides of the disc (= the world) The two birds met in Delphi, thus marking the location of the center of the world.

Legend has it that Gaia – the mother goddess – was the first to render oracles on the site of Delphi, which then named Pythô after her son, the serpent Python, guardian of the oracle.

According to the legend, the god Apollo, who also wanted to to guide men, killed the serpent Python so he could found his sanctuary on the flank of mount Parnassus.

Apollo was a good and generous god: Delphi was a sanctuary where men could consult him in the hope of obtaining his advice, but also to purifying themselves and atoning for their crimes.

🤔 Where does the name Delphi come from? 🤔
According to the legend, when his temple was founded, Apollo saw a Cretan boat in the distance on the sea. He then changed into a dolphin to join the ship and convince the crew to become guardians of the sanctuary.
The name Delphi is therefore derived from the word dolphin: δελφίς / delphís in ancient Greek.

Delphi according to the historians

– The sanctuary of Apollo

According to historians, the sanctuary was founded in the 8th century BC, before becoming, between the 6th and 4th centuries BC, one of the major places of worship in the Greek world. Delphi was a “panhellenic” sanctuary: Greeks coming from various cities (Athens, Corinth, Thebes…) met here to celebrate common rites.

The Greeks came to Delphi to ask for the advice of Apollo and be purified: the pilgrimage to Delphi is extremely ritualized. The pilgrims thus addressed the Pythia, through which they thought that the god made his oracles. The Pythia was a young woman chosen for her purity and her chastity. Sat on a tripod, she inhaled the steam emanating from a crevice and chewed laurel leaves, thus inducing a state of trance. A priest was charged with translating the oracle in verse.

At the zenith of the sanctuary, the most important figures of the Greek world came to Delphi to hear the oracle and to attract Apollo’s favors through offerings and sumptuous gifts.

The Pythian Games were great panhellenic celebrations created in the 6th century B.C. and dedicated to the god Apollo. They were quite similar to the Olympic Games of Olympia and the Asclepeia of Epidaurus.

These games include sporting events as well as musical and and poetic contests.

In Roman times, the cult of Apollo gradually lost importance until the Roman Empire strictly forbid pagan rites in 392. A Christian city was established on the site of the sanctuary before disappearing in the 7th or 8th century AD.

💡 Delphi in the Unesco World Heritage 💡
The ruins of Delphi were discovered by the French School at Athens – a foreign archaeological institute – in the late 19th century. A century later, in 1987, the sanctuary was listed as a UNESCO World Heritage Site.

Delphi is one of the most iconic archaeological sites in Greece. It is well worth a visit both for its historical value and for its breathtaking scenery.

You’ll need a good few hours to explore the entire site. In summer, Captain Ulysses recommends visiting Delphi early in the morning to avoid the crowd and enjoy the (relative) coolness. If the site conceals a thousand treasures, the Captain has drawn up a small list of the major points of interest and monuments.

The temple of Apollo

Dated from the 4th century B.C., the temple of Apollo was the 6th temple dedicated to the deity to be built on this site, the five the first temples having been destroyed. The temple is 24 meters/26 yards by 60 meters/65 yards. It was built on a volcanic fault, and the Pythia gave the oracles in this very spot.

In front of the temple, a pedestal marks the location of the altar, where the sacrifices were carried out.

The Sacred Way and the Treasuries

The Sacred Way is the path leading from the entrance of the sanctuary to the temple of Apollo. It is lined with votive monuments and “treasuries” built by various Greek cities to deposit offerings and ex-voto in honor of the god Apollo.

Among these treasuries, still remain:

Built in the 4th century BC, the theater of Delphi, nestled on a hillside, could accommodate up to 5000 spectators. The current theater however dates from the Roman imperial period.

The theater hosted performances given during festivals in honor of Apollo.

The stadium of Delphi

Built in the 3rd century BC (and later remodeled in the 2nd century AD), the stadium hosted the Pythian games, which took place every 4 years. The stadium could accommodate 6500 to 7000 spectators.

The stadium (and the starting line in particular) survived the test of time and remains quite miraculously well-preserved.

The goddess Athena Pronoia was considered the guardian of the sanctuary of Apollo (“pronoia” meant “before the temple” in ancient Greek).

Although slightly remote from the rest of the archaeological site, the sanctuary of Athena Pronoia is definitely worth a visit.

Located in a ravine, the Castalian Spring is a sacred source of water where pilgrims came to purify themselves before entering the sanctuary of Apollo.

Two fountains were discovered on site:

The archaeological museum of Delphi

Unanimously regarded as one of the most beautiful archaeological museums in Greece, the museum of Delphi exhibits rich collections of statues, offerings and ex-votos discovered on the archaeological site. Captain Ulysses can only recommend taking some time to linger a while in the museum.

Among the sculptures/artifacts on display, be sure to have a look at:

Where is Delphi? How to get to Delphi?

Located in Central Greece, 180 kilometers/110 miles from Athens, Delphi can be reached quite easily by road, in a little over 2 hours.

🚘 Visiting Greece by car 🚘
If you’re planning on exploring the Peloponnese on your own, Captain Ulysses strongly recommends renting a car: it is by far the most practical way to get around the peninsula. Not to mention that car rental in Greece is on the whole very cheap!
To find THE best deal, the Captain recommends Rentalcars, which compares offers from a host of rental services.
One last piece of advice: the Peloponnese is crisscrossed with small mountainous roads, so you should definitely opt for a fuel-efficient car, even if it is a little more expensive to rent!

– Getting the bus to Delphi

From the capital, several buses serve the city of Delphi every day. The journey takes about 3 hours.

While it may not the most convenient option to reach Delphi, it is without a doubt the cheapest alternative!

Find out more about schedules and rates here.

If you don’t feel like organizing your trip to Delphi yourself, you can also opt for a day trip from Athens.

Captain Ulysses recommends one in particular: excursion to Delphi

🚐 Multi-day trips in Greece 🚐
To explore the iconic monuments of the Peloponnese and mainland Greece without having to worry about organizing your trip, Captain Ulysses recommends opting for a multi-day trip. Transportation, hotel stays, the services of a guide and entrance fees to tourist sites are all included. Find out more here.

Opening times of the archaeological site of Delphi

The archaeological site of Delphi is open every day of the year except on January 1st, March 25, May 1st, Easter Sunday, December 25 and December 26.

Opening times vary depending on the time of year:

Admission to the archaeological site of Delphi

The entrance ticket is valid for both the archaeological site and the museum. Rates vary depending on the time of year:

Staying near the site of Delphi

The town of Delphi is located 1.5 kilometer/0.9 mile from the archaeological site.

You’ll find here a selection of the best hotels in Delphi. Captain Ulysses particularly recommends Hotel Pan for the value for money.

Looking for tips and recommendations? Here are all of Captain Ulysses’ suggestions in Greece!

🛏️ Accommodation: to book your accommodations in the Peloponnese, Captain Ulysses highly recommends Booking.com. From youth hostel to luxury boutique hotel: there’s plenty to choose from!

🚌 Local transportation: to get around the Peloponnese, Captain Ulysses can only recommend renting a car. He suggests renting your car on Rentalcars, which compares offers from a host of brands, including Hertz, Avis, Europcar and trusted local agencies.
If you prefer to avoid driving, GetYourGuide and Civitatis offer a selection of day-trips in the Peloponnese.

✈️ Flights: to book your flights to Greece, Captain Ulysses warmly recommends the Skyscanner comparator. You’ll be able to compare countless offers to find the best deal. If your dates are flexible, you can also compare prices over several months to find the cheapest flights possible.

👉 Book your tours and activities in advance!