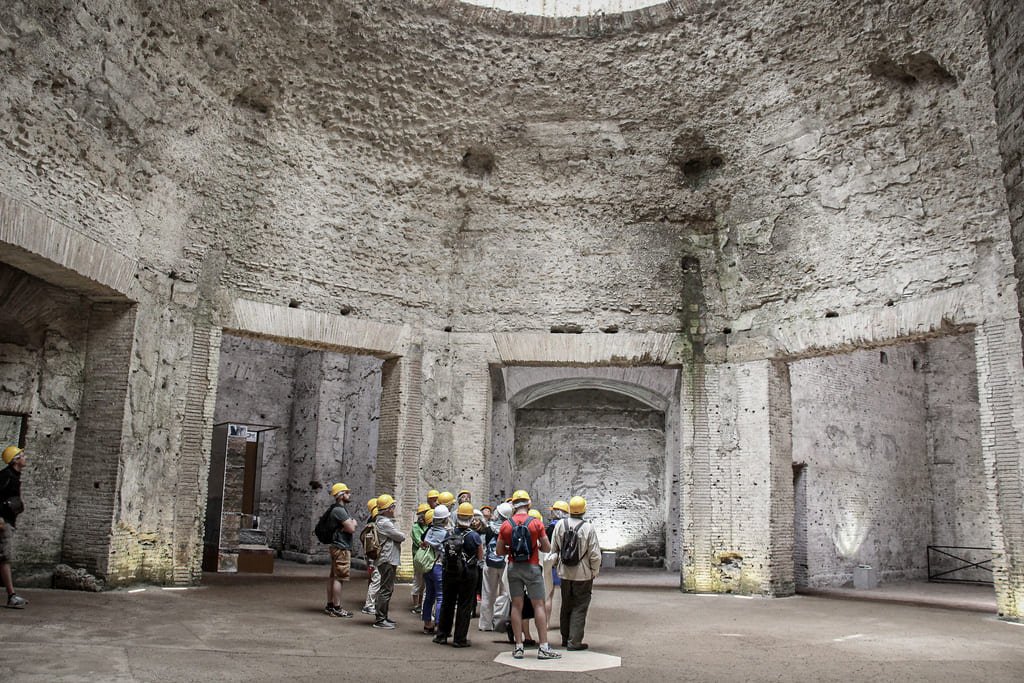 The Domus Aurea in Rome

Built for Emperor Nero after the great fire that devastated Rome in 64 AD, the Domus Aurea (the Golden House) was a huge, extravagant – and somewhat megalomaniacal – palace covering dozens of acres!

After falling into oblivion, the Domus Aurea was rediscovered in the 15th century and is now open to visit: an incredible invitation to discover 1st century AD Rome.

Brief history of the Domus Aurea

The origins of the Domus Aurea

In 64 AD, a large part of Rome was destroyed in a huge fire. Emperor Nero seized the opportunity to requisition the land which had been previously occupied by Roman homes to build a sumptuous palace instead. Some may even have suggested that Nero himself was behind the fire…

In any case, Nero ordered the construction of a vast palatial complex extending over several dozen acres between the Palatine and the Esquiline. The construction work was entrusted to architects Severus and Celer, while the frescoes the palace were designed by famous painter Fabullus. The Domus Aurea, the Golden House, owes its name to its stucco and golden ornamentation.

The monumental complex includes a variety of rooms of all kinds, as well as thermal baths, an artificial lake and vast gardens, vineyards, pastures and woodland!

But the palace comprises no kitchens, no latrines… The Domus Aurea is a ceremonial palace dedicated to parties and entertainment, rather than a residence. In short, this monumental complex was apparently never intended to be inhabited!

The Golden House, an avant-garde palace

If the Domus Aurea has gone down in history as a legendary palace, it’s not simply because of its monumental dimensions. At the time of its construction, the Golden House had all the makings of a futuristic palace (by the standards of the time, of course!)

Archaeologists discovered the remains of countless innovations, both architectural and artistic:

The fall of the Domus Aurea

But the inhabitants of Rome resented the fact that the immense site monopolised by the Domus Aurea was off limits to them. Little by little, the following Roman emperors opened the space to the public. Vespasian had the Flavian amphitheatre (later renamed the Colosseum) built on the site of the dried-up artificial lake, and Trajan had part of the Domus Aurea filled in to build baths…

The rediscovery of Nero’s Golden House

In the 15th century, a young Roman fell down a hole and landed in what seemed to be a cave whose walls were covered with frescoes… The Domus Aurea awakened from its long sleep!

The most emblematic artists of the time – and of the following centuries – rushed to this strange cave to admire its frescoes, among whom Raphael and Michelangelo, and later the Marquis de Sade and Giacomo Casanova.

Nero’s Golden House (Domus Aurea) became a source of inspiration for the artists of the 15th and 16th centuries and gave rise to a new pictorial style: the “grotesque” (in reference to the cave, “grotto” in Italian).

The Domus Aurea is the subject of a vast program of excavations and restoration.

In 1999, Nero’s Golden House opened its doors to the public, but had to close in 2005 due to the numerous damages caused by visitors. It reopened in 2014.

Due to the excavations, the Domus Aurea is only open to the public on Saturdays and Sundays. All visits are guided and a helmet (provided on site) must be worn inside at all times during the guided tour.

The tour is absolutely fascinating: the guides are archaeologists working on the excavation site during the week. Since 2017, virtual reality goggles even allow visitors to discover what Nero’s palace looked like in its heyday!

The Domus Aurea, a must-see in Rome?

The Domus Aurea is rarely listed as top tourist attraction in Rome. However, the visit is truly fascinating and Captain Ulysses highly recommends that you take some time to explore Nero’s somptuous palace.

The Golden House is located on Via della Domus Aurea, just a few steps from the Colosseum. The nearest metro stop is Colosseo. Sightseeing buses also stop nearby.

Unlimited access to public transport is included in the Omnia Card. Find out more here.

Visits only take place at weekends: during the rest of the week, the Domus Aurea is closed to the public so that the archaeologists can freely devote themselves to the excavations.

⚠️ Heads up! Ticket reservation is mandatory. You can book your visit online here or here.