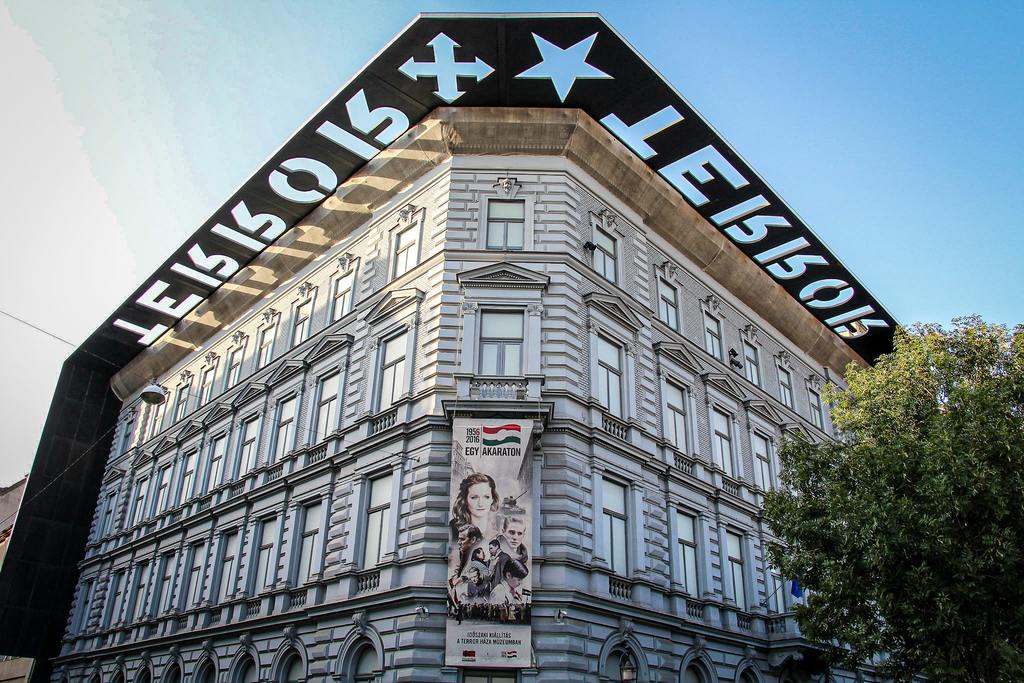 The House Of Terror In Budapest

Founded in 2000 to retrace the history of totalitarianism in Hungary, the House of Terror is arguably the most controversial museum in Budapest.

What are the criticisms of the museum’s detractors? Is the House of Terror worth a visit? Here are the answers to your questions!

A a few words about House of Terror

A museum dedicated to totalitarianism in Hungary

Created in 2000, the House of Terror ( Terror Háza in Hungarian) aims to retrace the history of the two totalitarian movements that marked Hungarian history in the 20 th century:

In 2000, under the government of Viktor Orbán, the building was turned into a museum.

Before visiting the House of Terror, it is important to understand that the museum is at the heart of a vast controversy.

Its detractors accuse the museum of mixing up the atrocities committed by the Nazis and those perpetrated by the communist regime. The museum’s detractors accuse Viktor Orbán of having created the House of Terror in Budapest for personal and political ends, with the aim of harming the Communist Party, which remains a major player on the Hungarian political chessboard and therefore one of Orbán’s main political opponents.

Moreover, if on paper, the Museum traces the history of both totalitarian movements in Hungary, only a very small section of the House of Terror is actually dedicated to the crimes committed by the Arrow Cross Party. The vast majority of the exhibition is devoted to the Soviet regime. And some specialists consider the version of the story told by the museum to be partial and biased.

⚓ Attention, sailors! ⚓
Want to find out more about Budapest’s top landmarks and museums? Check out the Captain’s article on the best things to do in the Hungarian capital!

Visiting the House of Terror in Budapest

Sensitive should definitely refrain from visiting the House of Terror in Budapest! The visit is quite immersive and chilling: the macabre scenography aims to shake visitors and arouse a feeling of uneasiness.

The facade of the building sets the tone, with its black frame displaying the word “Terror” next to the symbol of the Arrow Crosses and the Communist Star. Black and white portraits of victims of the two totalitarian regimes are also displayed on the building.

Inside, the experience is multisensory and immersive: disturbing soundtrack, videos, photographs, reproductions …

The visit ends with a descent into the bowels of the building to discover the cells hidden in the cellars. This is where the political police imprisoned, interrogated and tortured the regime’s prisoners.

Getting to the House of Terror in Budapest

To visit the House of Terror, head for the 6 th district of Budapest, in the neighborhood of Terézváros, just a 10 minute walk from the Budapest Opera House.

You can’t miss the House of Terror as its facade starkly contrasts with the colorful and picturesque buildings on the Andrassy Avenue.

Hop-on hop-off tourist buses also stop near the House of Terror. They’re quite handy to travel between the main sites and monuments of the capital.

Opening hours of the House of Terror in Budapest

The House of Terror is open Tuesday to Sunday, from 10 a.m. to 6 p.m. It is closed on Mondays and on public holidays.

Admission tickets for the House of Terror are: 3000 forints full price, 1500 forints reduced price. You can also opt for an audio guide for an additional cost of 1,500 forints.

Please note that the Budapest Card grants a 20% reduction on the admission ticket.

👉 If you want to find out more about the history of the communist regime in Hungary, Captain Ulysses recommends this guided tour with a historian guide (in English) .

⚓ The Captain’s opinion ⚓
Be careful, while the visit to the House of Terror is not without interest, it is important to keep in mind that it is very controversial and does not present history in an objective and factual way. It is therefore better to exercise critical judgment and discernment!

🚌 Transport in Budapest: Budapest’s public transport system is well-developped and quite easy to navigate: metro, bus, tram and even ferry. If you wish, you can also opt for a hop-on hop-off bus tour which stops at all the top tourist attractions in Budapest (audio guide included). Otherwise, there’s always the good old local ways of getting around the city: in a russian jeep or a Trabant.

✈️ Flights: Captain Ulysses highly recommends booking your flights on Skyscanner. You’ll be able to compare countless offers to find the best deal. If your dates are flexible, you can also compare prices over several months to find the cheapest flights possible.