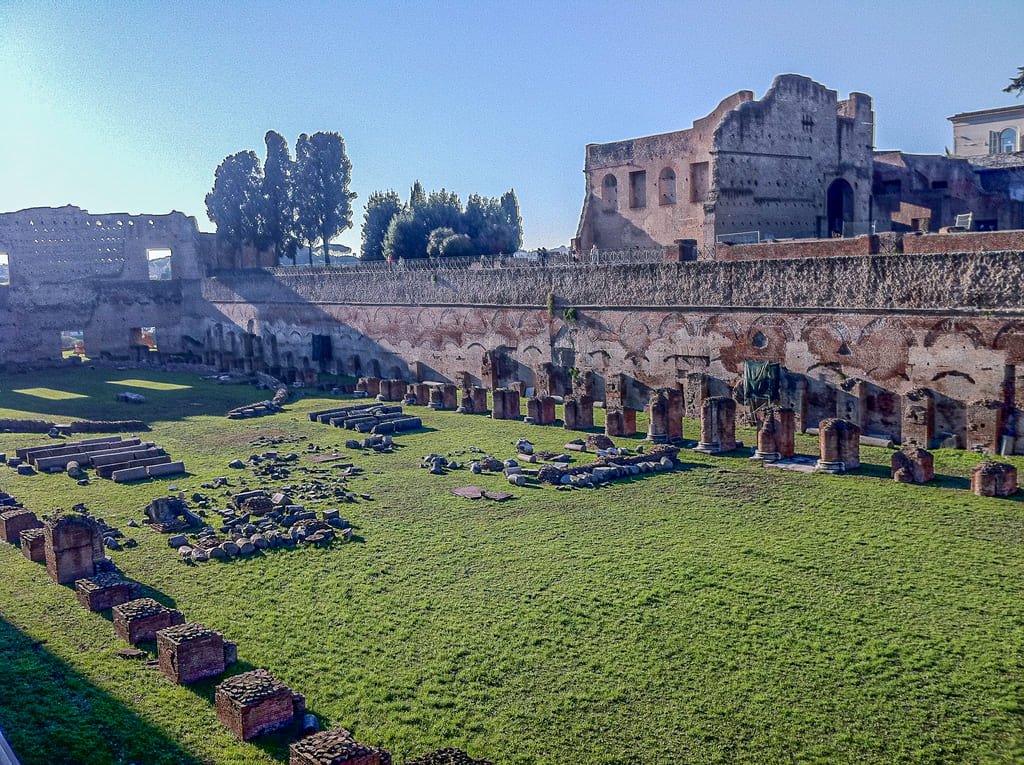 The Palatine Hill in Rome

Just a stone’s throw from the Roman Forum and the Colosseum, the Palatine Hill is high on the list of the Italian capital’s most emblematic ancient sites. Considered the cradle of Rome, this legendary hill is well worth a visit!

The Palatine Hill in a nutshell

Situated a stone’s throw from the Colosseum and the Roman Forum, the Palatine Hill is the most central of Rome’s seven hills (the six others being the Aventine Hill, the Caelian Hill, the Capitoline Hill, the Esquiline Hill, the Quirinal Hill and the Viminal Hill).

Culminating about fifty metres/165 ft above sea level, the Palatine Hill has two summits: the Germalus (51 m) and the Palatium (51.2 m).

Legends of the Palatine Hill

According to legend, the she-wolf discovered the twins Romulus and Remus at the foot of the Palatine before taking them in the Lupercal cave (which, by the way, was discovered by archaeologists in 2007).

The image of the she-wolf suckling the twins remains an emblem of the city today. You will find a beautiful statue of the scene in the Capitoline Museums.

When they became adults, the twins decided to found a city, but differed as to where the new city should be located: Romulus wanted to build it on the Palatine Hill while Remus was in favour of founding the city on the Aventine Hill. To decide between them, the brothers turned to the augurs, who designated Romulus as the founder and king of the future city.

Following his sucess, Romulus drew the boundaries of his new city on the ground. ealous, Remus provoked his brother by crossing the newly-drawn boundary. Out of revenge and fear of sharing power, Romulus killed his brother… Rome was born…

Moral of the story: if you like happy endings, forget Roman mythology!

In ancient Rome, the image of the she-wolf was often associated with prostitution. A brothel was called a lupanar in Latin. Some scholars therefore suggest that the she-wolf who took in Romulus and Remus was in fact… a prostitute.

Brief history of the Palatine Hill

Legend has it that Rome was founded on the Palatine Hill… and (for once) historians seem to agree!

The Palatine Hill in ancient times

During the Roman Republic (510 BC to 27 BC), the Palatine Hill became the ‘posh district’ of ancient Rome. The wealthiest Roman citizens – including Cicero and Mark Antony – had their residences built on the hill.

During the imperial period (from 27 BC onwards), the emperors appropriated the Palatine Hill to build their palaces, such as the Domus Tiberiana (built by Tiberius) or the Domus Augustana (built by Domitian).

According to ancient sources, in the middle of the 4th century AD, the Palatine Hill was home to:

… yes, it seems that in the Roman Empire, going to the baths was more important than buying a loaf of bread!

In any case, from the reign of Diocletian onwards, at the end of the 3rd century AD, the Palatine Hill was gradually abandoned by the Roman emperors. Although it continued to be inhabited during the following centuries, it was completely deserted in the 11th century.

The word “palace” is derived from the name “Palatine”. The Latin word “Palatium” originally referred to the Palatine Hill, before evolving in the time of Emperor Augustus to mean “imperial palace”.

The Palatine Hill in the Renaissance

For almost 5 centuries, the Palatine Hill fell into oblivion… until the 16th century, when it was rediscovered by rich Roman families who decided to develop vineyards and gardens there, like the Barberinis, the Ronconis, the Magnanis or the Farneses.

The latter had vast gardens laid out on the ruins of the Domus Tiberiana. The Farnese Gardens have survived the test of time, and it is possible to visit them today (access included in the ticket for the Palatine Hill).

Excavations on the Palatine Hill began in the 18th century, before intensifying in the 19th century, at the request of Napoleon III in particular (the same goes for the Roman Forum).

Excavations continue today with restoration plans and the discovery in 2007 of a cave that some believe to be the Lupercal cave, where the she-wolf once nursed Romulus and Remus.

The ruins of the Palatine Hill may not be among the most impressive in Rome, The program includes the site is well worth a visit for its exceptional Not bad, right?

The main monuments on the Palatine Hill

The Baths of Septimius Severus

The Palace of Domitian

The stadium – A few steps from the baths, the stadium is still clearly visible today. Archaeologists are not sure what the Romans used this vast rectangular space of 160 by 50 metres for: a circus for horse races or a pleasure garden?
In any case, some historians suggest that it may have been the stadium where Saint Sebastian died as a martyr.

The Houses of Livia and Augustus (Villa Livia)

Built in the first half of the 1st century BC, the House of Augustus was the residence of the first of the Roman Emperors (adopted son of Julius Caesar, born Octavian before taking the name of Augustus when he became Emperor).

Adjacent to the House of Augustus, the House of Livia was an annex serving as a residence for the wife of the emperor. With its beautiful frescoes, it is one of the best preserved monuments on the Palatine Hill. Stunning!

Created at the request of Cardinal Alexander Farnese on the ruins of the Domus Tiberiana, the Farnese Gardens are the oldest botanical gardens in Europe.

The terraced gardens offer the perfect setting for a delightful walk through rose gardens, umbrella pines and refreshing fountains. A breath of fresh air in the middle of the city!

The view of the Roman Forum and the Colosseum

From the heights of Mount Palatine, the view of the Roman Forum and the Colosseum is quite simply stunning. Captain Ulysses warmly recommends taking the time to wander around the site to immerse yourself in ancient Roman history in the shade of the umbrella pines. .

Getting to the Palatine Hill

The Palatine Hill is located a stone’s throw from the Colosseum and the Roman Forum.

Opening hours of the Palatine Hill

The opening hours of the Palatine vary according to the season:

The ticket office closes one hour before the site closes.

Tickets for the Palatine Hill and guided tour

You can either visit the Palatin Hill:

It all depends on your priorities. If you prefer visiting tourist attractions at your own pace, visiting the site on your own is perhaps your best option.

If you are fond of historical anecdotes, Captain Ulysses warmly recommends a guided tour.

Especially since the guided tours are, from the Captain’s point of view, particularly interesting when it comes to ancient sites where it can be somewhat difficult to imagine what things looked like centuries ago.

Anyway, the Captain can only recommend booking either your entrance ticket or your guided tour in advance.

Admission to the Palatine Hill is combined with tickets for the Roman Forum and the Colosseum: two of the most popular sites in Rome! The queues at the entrance can be dreadfully long.

For your information, the entrance to the Palatine Hill is also included in the Roma Pass.