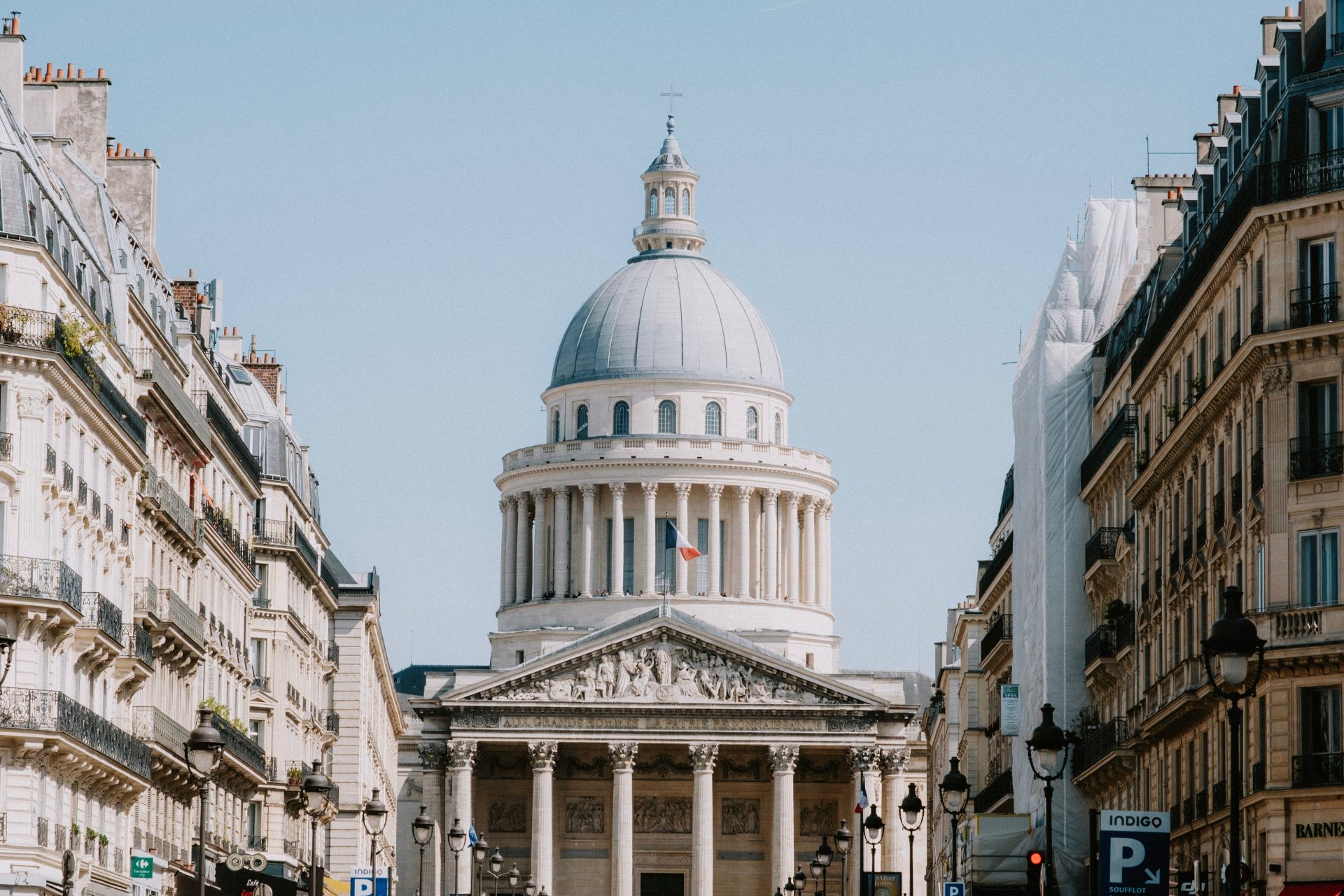 The Pantheon of Paris

Nestled in the Latin Quarter, the Pantheon of Paris is undoubtedly one of the most emblematic monuments of the French capital. Built in the 18th century, it houses the tombs of many personalities who have marked the history of France… In short, an essential stop for art and history lovers.

Are you looking for a hotel in Paris? Feel free to have a look at the Captain’s article: Where to stay in Paris? Tips & recommendations

A short history of the Pantheon in Paris

Built in the 18th century at the request of Louis XV, the Pantheon of Paris follows the plans of the architect Jacques-Germain Soufflot. The king wished to build a church dedicated to Sainte-Geneviève, patron saint of the city of Paris, in the Latin Quarter, where there were already many religious buildings.

If the Pantheon has lost any religious function today, it was originally a church!

Although it is considered neoclassical in style, the monument, which is very eclectic, borrows from different architectural styles (Gothic, Byzantine, classical).

Many great men (and women) are buried in rhz Pantheon, such as Voltaire, Rousseau, Victor Hugo or Marie Curie.

Today, the Pantheon is one of the most emblematic monuments of Paris. Open to the public, it welcomes millions of visitors every year who come to discover its rich past and its many architectural treasures.

🏛️ From Rome to Paris 🏛️

The Pantheon of Paris is not the only famous monument to bear this name… it indeed also named after the Pantheon in Rome, which is much older and dates back to the Roman Empire! The famous Italian building is also used as a mausoleum for great men, but – unlike the Pantheon in Paris – it remains a consecrated church.

Visiting the Pantheon in Paris

The exterior of the Pantheon in Paris

Before entering the Pantheon, let’s halt, if you will, outside the famous Parisian monument.

110 meters / 360 feet long and 84 meters / 275 feet wide, the Pantheon is a building in the shape of a Greek cross, surmounted by a 83-meter /72-eet high dome at the top of which a small lantern. The facade is decorated with a portico of Corinthian columns and surmounted by a pediment representing the Motherland, protector of Science – represented on the right by scholars, artists and philosophers – and History – represented on the left by great statesmen. On the pediment, don’t miss the famous inscription: “To the great men, the grateful motherland”.

The interior of the Pantheon in Paris

One thing is certain, the architecture of the Pantheon is very imposing!

The central nave is supported by columns and surmounted by a dome with an oculus, a star-shaped opening at the top of the dome. Large windows also allow light to enter the building.

The Pantheon is decorated with numerous frescoes and works of art that evoke the history of France and its great men, including works by Puvis de Chavannes, Antoine-Jean Gros, Léon Bonnat, Alexandre Cabanel and Jean-Paul Laurens.

You will also find countless busts and statues of famous personalities, such as Voltaire, Rousseau, Victor Hugo and Marie Curie.

From April 1 to October 31, visitors can climb to the top of the dome to admire the view of the capital.

The tombs of the Pantheon in Paris

Located under the building, the crypt of the Pantheon in Paris houses the tombs (or urns) of 81 personalities who have marked the history of France, each adorned with sculptures and gilding, and surrounded by statues and busts.

You will find among others the tombs of Voltaire, Victor Hugo, Émile Zola, Jean-Jacques Rousseau, Marie Curie, Joséphine Baker and Simone Veil.

Although the crypt now houses the remains of 81 emblematic personalities, it has a capacity of… nearly 300 tombs! .

The Foucault pendulum consists of a weight suspended from a silk thread 67 meters / 220 feet long. It is set up under the dome of the Pantheon, in the central nave. The swinging motion of the pendulum highlights the rotation of the Earth on itself.

Getting to the Pantheon in Paris

Located in the 5th arrondissement of Paris, in the famous Latin Quarter, the Pantheon is within walking distance of many points of interest such as the Sorbonne University, the Luxembourg Garden and Place Saint-Michel.

The Pantheon is easily accessible by public transportation:

For your information, the Pantheon is also accessible to disabled visitors.

The Pantheon is open every day of the week:

Access to the top of the dome is open from April 1 to October 31.

Tickets for the Pantheon in Paris are 11.50 euros (full price). Admission is free for people under 26, students, teachers and people with disabilities.

You will have to pay an extra 3.50 euros to access the top of the dome. Captain Ulysses recommends that you book your entrance tickets online to avoid the queues at the entrance of the monument: skip-the-line tickets for the Paris Pantheon.

💡 The Captain’s tip: access to the Pantheon is also included in the Museum Pass. It provides direct access to more than 60 museums and monuments in Paris, including the Louvre Museum, the Musée d’Orsay and the Centre Pompidou.
More information: Paris Museum Pass