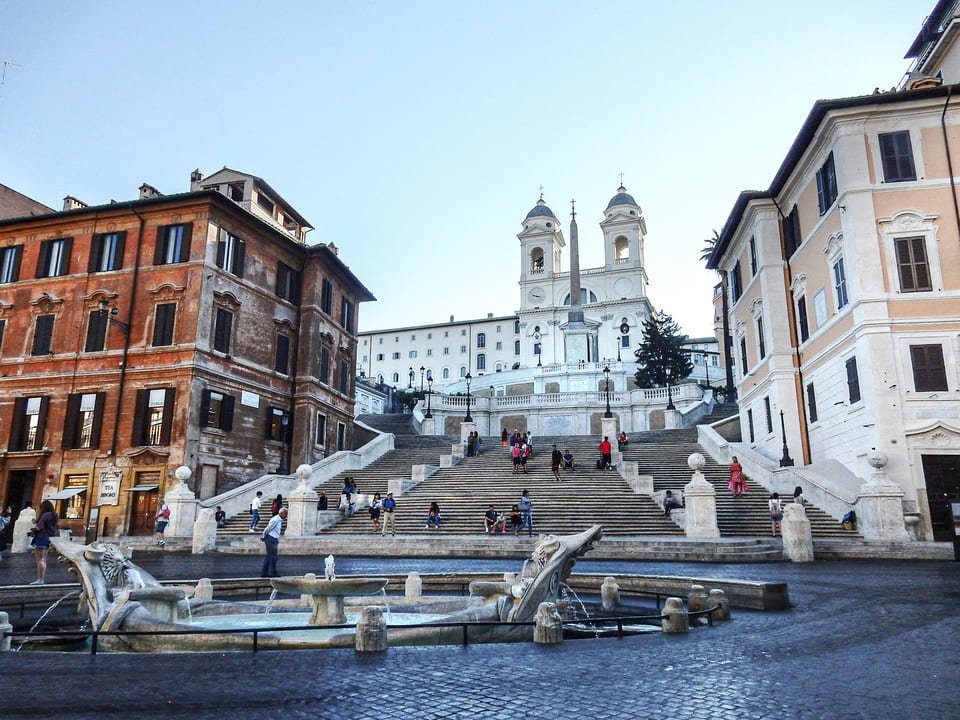 The Piazza di Spagna in Rome

Located in the heart of Rome’s historic centre, at the crossroads of the capital’s most exclusive shopping streets, Piazza di Spagna is a must-see for any visitor exploring the Eternal City! Follow the guide!

At the end of the 15th century, St Francis of Paola, founder of the Order of Minims, acquired a vineyard with the support of the French king Charles VIII to build a convent: the Convent of the Santissima Trinità dei Monti.

In the 16th century a church adjoining the monastery was built at the request of the French king Louis XII and completed by the Italian architects Giacomo della Porta and Carlo Maderno.

At the beginning of the 17th century, Spain established its embassy to the Holy See – the Spanish Palace – in the square below the Church of the Trinità dei Monti, thus giving it its name: Piazza di Spagna (“Square of Spain”).

Designed by Pietro Bernini (the father) and Gian Lorenzo Bernini (the son), the now famous Fontana della Barcaccia was added in 1629.

In the 18th century, the streets around Piazza di Spagna became the cosmopolitan centre of the Roman capital.

The Spanish Steps (Scalinata), whose construction was financed by the French under the aegis of Cardinal Pierre Guérin de Tencin, was built between 1723 and 1726 to link the Spanish Palace to Trinità dei Monti.

The obelisk was erected at the top of the staircase in 1789, while the column of the Immaculate Conception was installed opposite the Palazzo di Propaganda Fide in 1854.

Piazza di Spagna is also famous for having hosted legendary English poet John Keats at the very end of his life. He spent his last days in a building at number 26, Piazza di Spagna, where he died of tuberculosis on 24 February 1821 at the age of 25.

The Church of the Trinità dei Monti

Perched on the Pincio hill, the Church of the Trinità dei Monti overlooks Piazza di Spagna.

The Trinità dei Monti, recognisable by its façade flanked by two symmetrical bell towers, was completely restored in 1816 on the orders of King Louis XVIII, over three centuries after its construction in 1495.

Inside, the church displays some emblematic works of art, including The Deposition by Daniele da Volterra.

In front of the church, don’t miss the Obelisco Sallustiano, built in the time of imperial Rome on the model of the Egyptian obelisks.

Named “Spanish Steps” although it was built on the initiative of the French, this imposing staircase connects the church to Piazza di Spagna below.

Designed by architects Francesco de Sanctis and Alessandro Specchi, this vast baroque staircase counts a total of 135 steps interspersed with three terraces, which symbolise the Trinity.

The stairs are particularly grandiose in the spring, when they’re covered with blooming azaleas!

Located at the foot of the Spanish Steps, in the centre of Piazza di Spagna, the Fontana della Baraccia (Fountain of the Boat) is the work of sculptors Pietro and Gian Lorenzo Bernini.

Erected in 1626, this Baroque masterpiece depicts a boat taking on water, an allegory of the dramatic flood that struck Rome in the winter of 1598 as a result of a violent rise in the Tiber.

The Column of the Immaculate Conception

Built in 1854, opposite the Palazzo di Propaganda Fide, the Column of the Immaculate Conception is located in Piazza Mignanelli which is an extension of Piazza di Spagna.

Designed by architect Luigi Poletti, the column celebrates the proclamation of the dogma of the Immaculate Conception under the pontificate of Pope Pius IX (following a stormy debate that agitated the Church for several centuries).

The Column comprises a marble base on which rests a cipolin marble column almost 12 metres / 40 ft high, topped by a bronze statue of the Virgin Mary designed by sculptor Giuseppe Obici. The marble base is adorned with four statues representing King David, the prophet Isaiah, the prophet Ezekiel and Moses.

The most famous palaces in Piazza di Spagna

Located at number 26 of Piazza di Spagna, in the building where the English poet John Keats spent his last days, the Keats-Shelley Memorial House is dedicated to English romantic poets John Keats and Percy Bysshe Shelley.

While insatiable readers will enjoy the visit, others can skip it without regret.

Located in the 16th century Palazzetto del Borgognoni, the Giorgio de Chirico House Museum displays works by the famous Italian artist. Chirico acquired the palace in 1948 and spent the last thirty years of his life there. When he died in 1978, his widow left the house as it was. In 1998 it was converted into a museum.

Please note that visits must be booked in advance. The museum is closed on Mondays and Sundays.

You can book your visit directly on the museum’s website.

Opened in 1893, Babington’s Tea Room is the oldest tea room in the Italian capital. It’s the perfect place to take a well-deserved after scouring the city!

The surroundings of Piazza di Spagna

The surroundings of Piazza di Spagna are famous for their countless designer boutiques, each more iconic than the last: Armani, Prada, Hermès, Versace…

Via del Corso, Via Condotti, Via Frattina and Via del Babuino are heaven on earth for shopaholics!

Halfway between the Trevi Fountain and Villa Borghese, Piazza di Spagna is located in the historic centre of Rome.