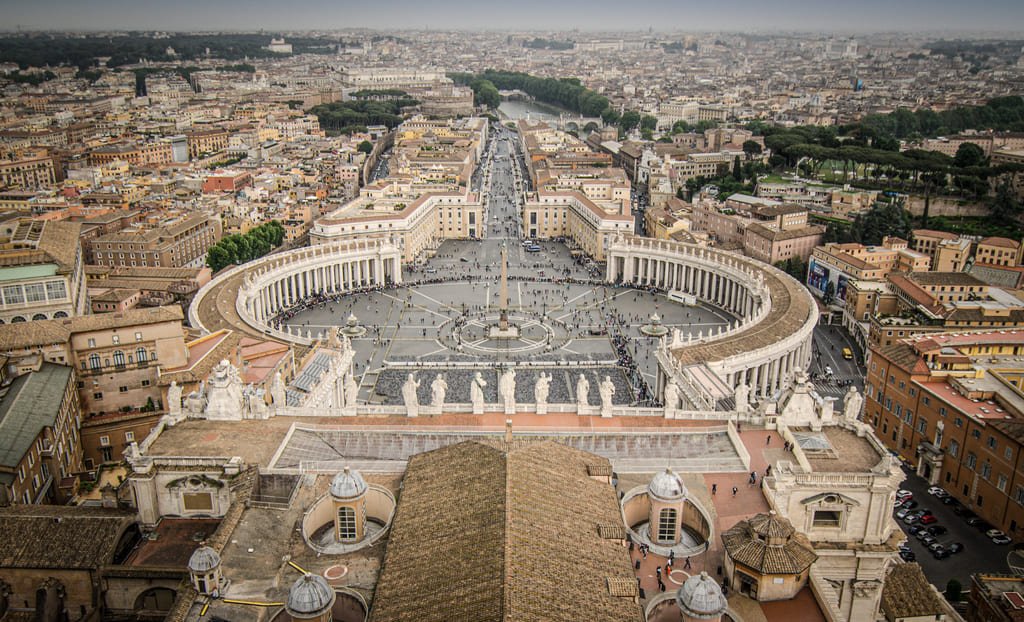 Follow Captain Ulysses on a tour of this architectural gem in the heart of the Vatican!.

Brief history of St Peter’s Square in the Vatican

Let’s go back in time to the 16th century.

In 1506, Pope Julius II ordered the destruction of the early Christian basilica built in honour of St. Peter by Emperor Constantine in the 4th century AD. Why? To make way for a new, lavish and opulent basilica.

As the spiritual centre of Catholicism, Pope Jules II intended St. Peter’s Basilica to inspire awe and wonder to all pilgrims and travelers visiting the ‘Eternal City’.

The Pope entrusted the construction of the new basilica to the greatest architects of the time, including Bramante, Raphael, Baldassarre Peruzzi, Michelangelo, Giacomo della Porta, Carlo Maderno and Bernini.

The new St. Peter’s Basilica was consecrated by Pope Urban VII in 1626. At the time, however, St. Peter’s Square remained a relatively ordinary rectangular esplanade.

Thirty years later, in 1656, that Pope Alexander VII entrusted Bernini with the difficult task of completely restructuring St. Peter’s Square in order to highlight the new basilica as well as to be able to accommodate large gatherings. Work began in 1658 and was completed in 1667.

Between 2009 and 2014, St. Peter’s Square was subject to a vast restoration plan initiated by the Vatican Museum and financed by private patrons.

With its monumental dimensions, St. Peter’s Square can only inspire awe and amazement:

When Bernini took over the restructuration of St. Peter’s Square in the 17th century, he quickly discarded the old rectangular plan and opted for a much more complex structure instead.

Bernini’s version of St. Peter’s Square includes two spaces of trapezoidal (at the foot of the basilica) and an elliptical shapes.

The monumental ellipse is bordered by a quadruple colonnade made up of 284 columns and 88 pilasters, and surmounted by 140 statues of saints which were designed by Bernini’s disciples.

On the trapezoidal square, don’t miss the two monumental statues sculpted between 1838 and 1840 and flanking the staircase: a statue of St Peter by Giuseppe de Fabris and a statue of St Paul by Adamo Tadolini.

Keep your eyes peeled for two white circles drawn on the ground on either side of the obelisk, with the mention ” Centro del Colonnato “.

If you stand in the middle of one of these two circles, you’ll be able to witness an incredible optical illusion: the four rows of columns “merge” to form a single one… impressive!

Located in the centre of the ellipse of St. Peter’s Square, the Vatican Obelisk is a 25-metre high Egyptian obelisk brought from Alexandria on the orders of Caligula. Caligula had it installed in the Circus of Caligula and Nero, which at the time was located a few metres from the present-day St Peter’s Basilica.

According to Christian legend, the obelisk marked the site of the martyrdom of St. Peter, who was crucified upside down in the Circus of Caligula and Nero between 64 and 68 AD.

In 1586, on the orders of Pope Sixtus V, the architect Domenico Fontana moved the obelisk to the centre of St Peter’s Square where it still stands today, surrounded by four bronze lions.

The fountains of St Peter’s Square

About sixty metres on either side of the obelisk, you will find two fountains which are also definitely worth a look:

In case of danger, the Passeto di Borgo allowed the Pope to safely take refuge in Castel Sant’Angelo, which was then a military fortress.

Once you’ve explored St. Peter’s Square, it’s high time to turn your attention to the jewel of the Vatican… St. Peter’s Basilica, obviously!

The basilica’s construction work was overseen by several of the most emblematic artists and architects of the 16th and 17th centuries, among whom Raphael, Michelangelo and Bernini.

In short, don’t be put off by the long queues at the entrance to the Basilica: the visit is well worth the wait! And if you are not the patient type, you can always opt for a skip-the-line ticket. Free access to the Basilica is also included in the Rome Tourist Card and the Omnia Card.

Getting to St. Peter’s Square

Located in the heart of Rome, St. Peter’s Square is easily accessible on foot or by public transport.

The nearest metro station is Ottaviano, on line A. City buses and sightseeing buses also stop within walking distance of St Peter’s Square.

If walk to the Vatican, the Captain strongly recommends that you take the Via della Conciliazione between Castel Sant’Angelo and St. Peter’s Square: the view is quite simply stunning!

If you want to avoid vast crowds, Captain Ulysses warmly recommends that you set your alarm clock (very) early to arrive in St Peter’s Square early in the morning.

Please note that proper attire is required to visit St. Peter’s Basilica and that you should cover your shoulders and legs. If the weather is hot, you can simply bring a scarf or shawl to cover up for the duration of the visit.

Guided tours of the Vatican

To avoid endless lines and not miss a thing, Captain Ulysses highly recommends this guided tour of St. Peter’s Basilica.