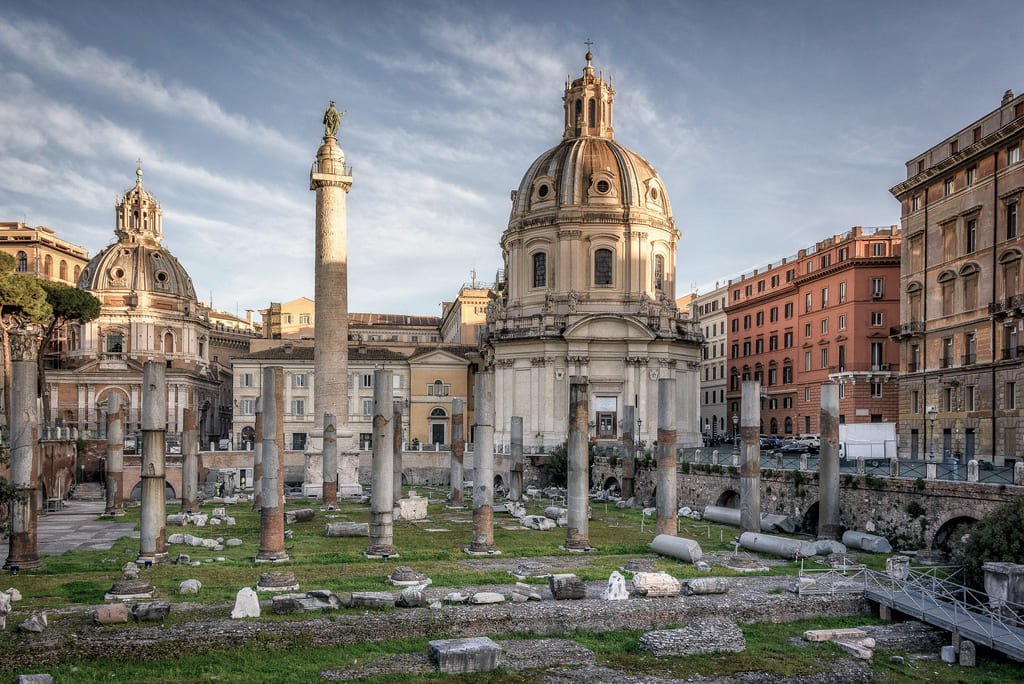 Nestled in the heart of Rome’s ancient district, Trajan’s Forum (Forum Traiani) – where you’ll find Trajan’s Market as well as Trajan’s Column – is the largest and best-preserved of the Imperial Forums.

In the 1st century AD, the Roman Forum became somewhat cramped for the growing Roman population. Around the same time, the political and judicial activities of the Empire were transferred to the Palatine Hill.

The Imperial Fora extend over a vast area (½ kilometer long and about 300 meters wide).

Built between 106 and 113 AD thanks to the spoils of war amassed during the Dacian Wars, Trajan’s Forum commemorates the victories of the Emperor against the Dacian tribes.

The Dacian Wars were two military campaigns that opposed Emperor Trajan to the Dacian people (settled more or less in present-day Romania) between 101 and 106 AD. They ended with the annexation of Dacia to the Roman Empire.

Trajan’s Forum is the largest and most ambitious of the Imperial Fora… a feat, considering that the Emperor and his architect – Apollodorus of Damascus – had to clear and level a vast area between the Capitoline hills and the Quirinal in order to have enough space for their colossal project.

In Ancient times, the Forum of Trajan was organized around a central square and comprised many buildings (many of which unfortunately have not survived the test of time):

In the middle Ages

If the Forum of Trajan remained relatively intact until the late Antiquity, it virtually disappeared in the Middle Ages. Many of the forum’s buildings were destroyed in an earthquake in 801.

Subsequently, the Forum’s materials were looted and new buildings were gradually built above the ruins of the ancient monuments. One church even “recycled” Trajan’s Column as a bell tower!

Since the Middle Ages

In the 19th century, Napoleon III fell in love with Trajan’s Column… so much so that he even considered having it transported to France! But the project turned out to be much too expensive, so Napoleon could only make copies of the monument. What a relief for the Romans!

The Forum of Trajan is the largest of the Imperial Forums (300 meters x 185 meters). The Forum’s design was also quite innovative at the time of its construction. Unlike the other forums, Trajan’s forum was built around a civil basilica – the Basilica Ulpia – rather than a religious temple.

Even though it might be hard to believe considering how bare it appears today, it was originally richly decorated with marble, stucco and paintings.

Only Trajan’s Column, Trajan’s Market and some vestiges of the Basilica Ulpia have survived the centuries.

Surprised by the presence of a basilica on a Roman forum? In ancient Rome, a basilica was a civil building, intended for financial, commercial or judicial activities. It had no religious function.

Archeologists believe that the Basilica Ulpia might also have taken over the functions of the Atrium Libertatis – a building where the ceremonies for the emancipation of slaves took place –, which was destroyed to make room for the construction of Trajan’s Forum.

Only fragments of columns, cornices and bas-reliefs remain today.

Trajan’s Column is the most famous – and best preserved – monument in Trajan’s Forum.

Nearly 40 meters high, this huge Doric column built entirely of Carrara marble was probably intended to recall the height of the area that had to be excavated to allow the construction of the Forum.

But the column is most famous for its 200 meters long bas-relief retracing the military campaigns of Trajan in Dacia. The frieze of the column is divided into 155 scenes featuring over 2500 characters! The Emperor is represented 59 times. The scenes depicted on the column are obviously an amazing source of information for historians regarding the habits and customs of the Romans at the beginning of the 2nd century AD.

While all turns (= spiral, winding) of the bas-relief seem to have the same proportions, it’s actually just an optical effect. The scenes carved at the bottom of the column are smaller than those carved at the top, so that they all appear the same size to the observer at the foot of the monument.

Originally surmounted by a bronze statue of Trajan – which disappeared during the Middle Ages – Trajan’s Column has been crowned since the 16th century by a statue of Saint Peter.

While the column may look full, the inside of the monument is actually hollow. The pedestal houses a funerary chamber where the urns containing the ashes of Trajan and his wife Plotina (now extinct) were placed during Antiquity. The column also houses a spiral staircase (185 steps) leading to the top.

Built in terrace-tiers, Trajan’s Market first served as a foundation for the Quirinal hill, excavated to provide the space necessary for the construction of the forum.

This imposing construction – considered by some to be the ancestor of our modern shopping centers – probably housed nearly 150 businesses and boutiques on the lower floors, as well as administrative offices on the upper floors.

Today, Trajan’s Market are home to the Museum of the Imperial Forums. The museum gives visitors the opportunity to explore the Market, but also to discover models of ancient buildings as well as vestiges found on the imperial forums.

Where are Trajan’s Forum & Trajan’s Column?

To get to the Trajan’s Forum, head for Via dei Fuori Imperiali, a few steps from the Colosseum, the Roman Forum and the Palatine Hill.

The nearest metro stops are Vittorio Emanuele on line A and Colosseo on line B. Many buses also stop in Piazza Venezia, just 300 meters from Trajan’s Forum.

Please note that unlimited access to public transport is included in the Roma Pass and Omnia Card. More info here.

While visitors can visit Trajan’s Market, which now houses the Museum of the Imperial Forums (€9.50 full price), the rest of Trajan’s Forum is unfortunately not accessible to the public. Visitors can therefore only admire Trajan’s Column from afar.