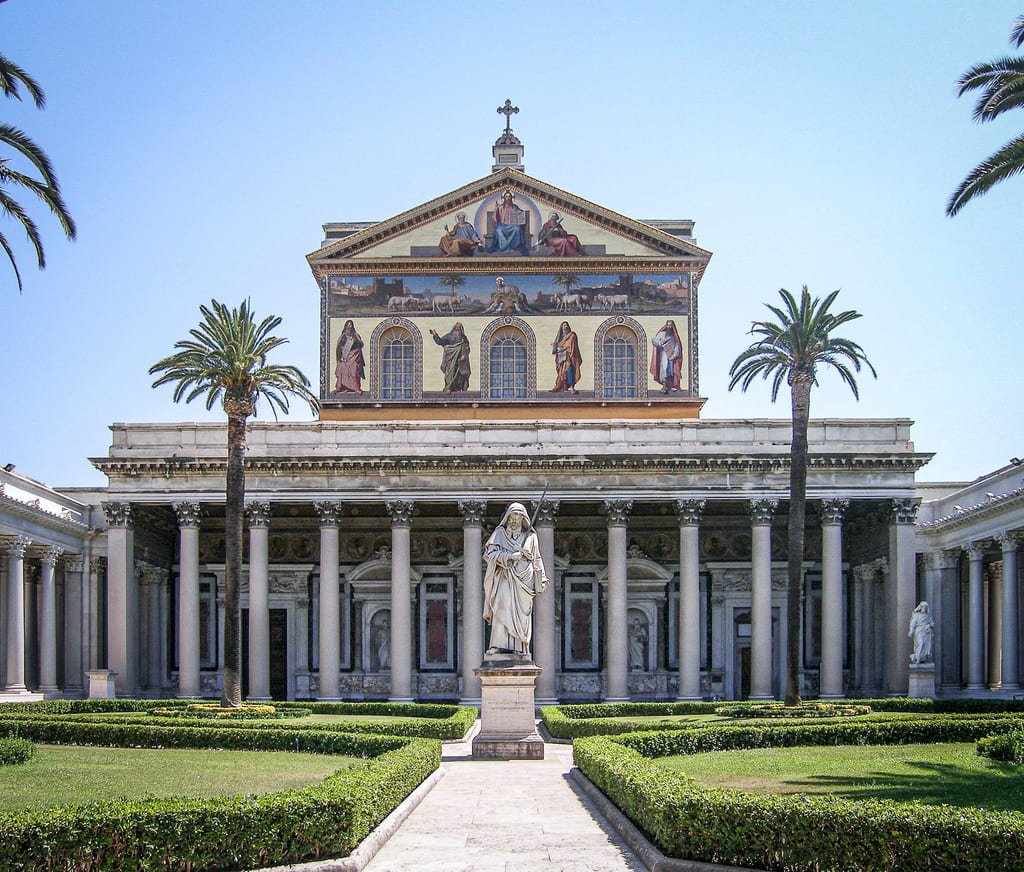 The Basilica of Saint Paul Outside the Walls in Rome

Located outside the Aurelian Wall marking the limits of ancient Rome, the Basilica of St. Paul Outside the Walls (Basilica di San Paolo Fuori le Mura) is one of the four major basilicas of Rome and the 2nd largest church in the capital after St. Peter’s.

Brief history of the Basilica of St Paul Outside the Walls

Who was Paul the Apostle?

St Paul (also called Paul of Tarsus or Saul) was a Roman citizen of Jewish origin and has become of the major figures in the Christian tradition.

While in Rome, Paul fell victim to the persecution of Christians by Emperor Nero. Sentenced to death, he was beheaded on the Via Ostiense.

The foundation of the Basilica of St Paul Outside the Walls

According to Christian tradition, the remains of St. Paul were recovered by a Roman Christian woman and buried in a necropolis outside the Aurelian Wall, hence the name of the basilica: St. Paul Outside the Walls.

In 313, the Edict of Milan put an end to the persecution of Christians in the Roman Empire. The Emperor Constantine had the first basilica built over the tomb of Paul, which soon became a major pilgrimage site for Christians. In 383, the first building was destroyed to make way for a much larger basilica built under the reign of Theodosius I.

The Basilica of St. Paul Outside the Walls was the largest religious building in Rome until the construction of St. Peter’s Basilica in the 16th century.

In 1823, a fire almost completely destroyed the Basilica of St. Paul Outside the Walls. As a result, little remains of the original building today, with the exception of the 13th century cloister and the stunning mosaic of the triumphal arch.

Rebuilt in the 19th century, Saint Paul’s Basilica follows the layout of the original building, but incorporates the neo-classical aesthetic in vogue at the time of its reconstruction (coffered ceiling, etc.)

The Basilica of St. Paul Outside the Walls is now one of the four major basilicas in Rome (along with St. Peter’s, St. John Lateran and St. Mary Major) and remains the 2nd largest church in the Italian capital after St. Peter’s.

Visiting St Paul Outside the Walls

The exterior of the Basilica of St Paul Outside the Walls

Before venturing inside the basilica, take time to stop outside to admire the impressive façade.

In the middle of the atrium, don’t miss the colossal statue of Saint Paul represented with his attributes: the sword of his martyrdom and the book of the epistles.

The magnificent 19th century mosaic on the pediment of the basilica is also worth a look with :

The interior of St Paul Outside the Walls

At the request of Pope Leo I, the main nave was adorned with·medallions representing all the popes in history. The medallion of the current pope in power is permanently illuminated. Legend has it that the world will end when there is no more room for new medallions.

Between the nave and the transept, don’t miss the incredible mosaic of the triumphal arch which survived the fire of 1823. Dating from the 5th century, this ancestral mosaic represents a passage from the Apocalypse with Christ in majesty, and on either side of this central figure, the Doctors of the Church, the four Evangelists, Saint Peter and Saint Paul.

The tomb of St. Paul of Tarsusis located under the huge altar surmounted by a gothic ciborium dating from the 13th century and supported by red porphyry columns.

Don’t forget to take a look at the large marble Easter candelabra to the right of the altar, which dates from the 12th century.

The mosaic in the apse dates from the 13th century. Commissioned by Pope Innocent III in the 13th century and restored after the fire of 1823, it depicts Christ surrounded by Saints Peter, Andrew, Paul and Luke.

You can access to the cloister·(payable), which fortunately survived the fire of 1823 in the transept.

Built in the 13th century, the Romanesque cloister was the work of Vasaletto. It is remarkable for its columns decorated with mosaics in the cosmastic style.

The Basilica of St Paul Outside the Walls also boasts a picture gallery (payable access) showcasing paintings by Italian masters such as Giotto, Raphael, Leonardo da Vinci and Titian.

Getting to St Paul Outside the Walls

The Basilica of St. Paul in Rome is located on Piazzale San Paolo, south of the historic centre, outside the Aurelian Wall.

The nearest metro station is Basilica San Paolo (line B). Bus number 23 and 271 also stop at the Basilica.

Opening hours of the Basilica of Saint Paul Outside the Walls

The Basilica of St Paul Outside the Walls is open every day from 7am to 6.30pm.

Access to the basilica is free but you’ll have to pay 4 € to access the cloister and the art gallery. To avoid having to queue, you can buy your tickets online in advance.

For more information: tickets for the cloister, the picture gallery and the archaeological site of the Basilica of St Paul Outside the Walls