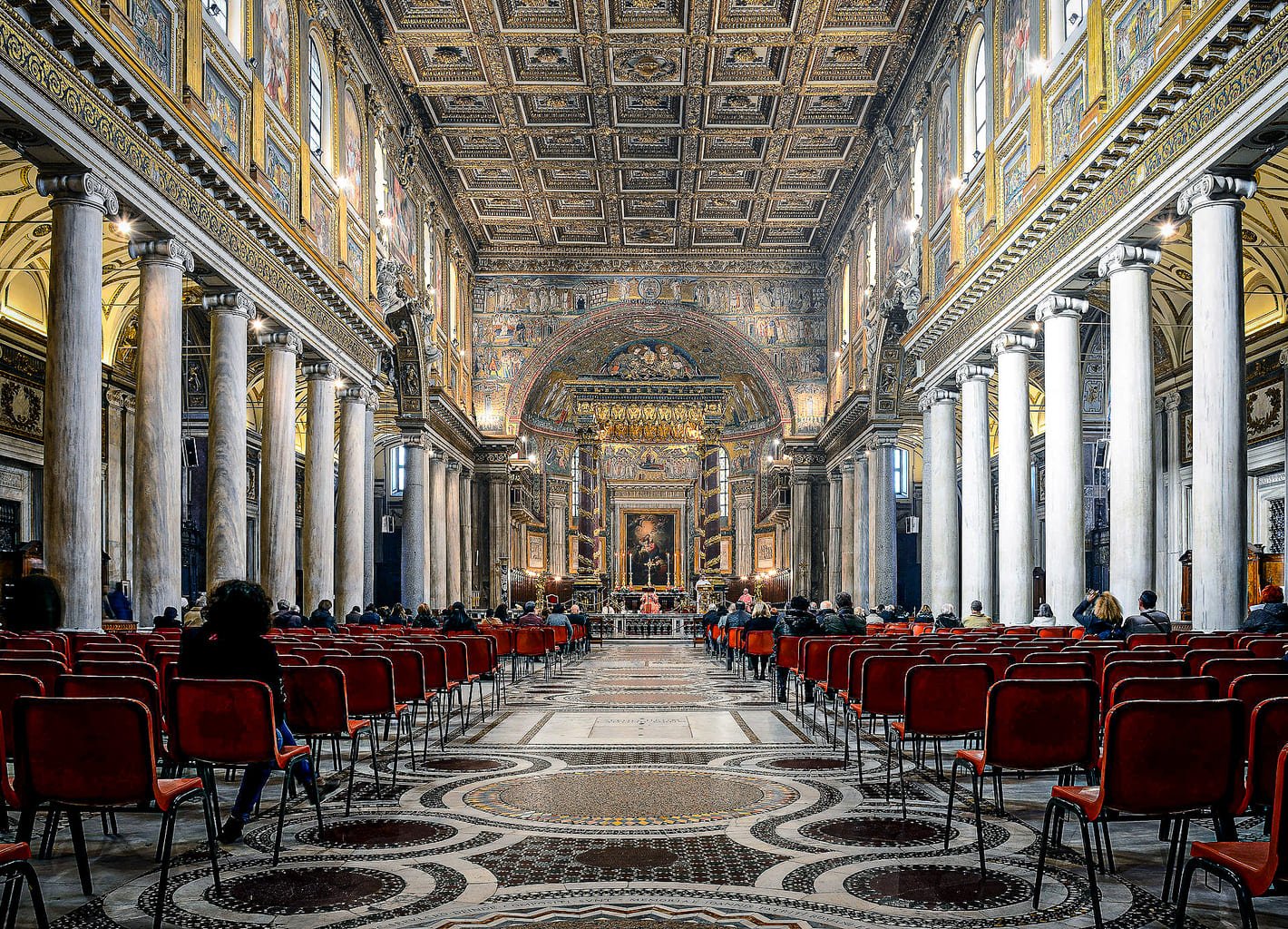 The Basilica of Santa Maria Maggiore in Rome

Nestled on the Esquiline hill, the Basilica of Santa Maria Maggiore (Saint Mary Major) is the largest church in the capital dedicated to the Virgin Mary as well as one of Rome’s four major basilicas (St Peter’s, St John in Lateran and St Paul Outside the Walls).

Brief history of the Basilica of Santa Maria Maggiore

According to legend, on the night of August 4-5, 356, the Virgin Mary appeared to Pope Liberus and a rich Roman named John in a dream. The Virgin asked them to build a sanctuary for her in a place she would designate. The next day, the pope and John realised that it had miraculously snowed on the Esquiline hill during the night, in the middle of August.

The pope therefore ordered the construction of a Marian church (= dedicated to the Virgin Mary) which was financed by John.

The history of St Paul’s Cathedral

It would seem, however, that history contradicts the legend, however poetic it may be!

The construction of the Basilica of Santa Maria Maggiore began in the 5th century at the request of Pope Sixtus III and following the Council of Ephesus, which gave the Virgin Mary the title of Theotokos, “Mother of God”.

At the time of its construction, the basilica follows a simple basilical layout in the Palaeochristian style (typical of the Roman Empire and late Antiquity). It was renovated and enlarged several times over the following centuries, with the addition of the apse, transept and bell tower in the 13th century, the construction of chapels in the 16th and 17th centuries, and the construction of the Baroque façade in the 18th century.

⛪The basilica with many names ⛪

Although it is known today as Santa Maria Maggiore, the basilica has had several names over the centuries: Our Lady of the Snows (in homage to its legendary foundation), Santa Maria Liberiana (in reference to Pope Liberus) or even Santa Maria del Presepe (in reference to the relics of the Holy Crib that it houses).

The exterior of the basilica

Before entering the basilica, take time to admire the imposing exterior. The medieval campanile, Romanesque in style, is the highest in the Italian capital.

The impressive façade of the Basilica of Santa Maria Maggiore also comprises a magnificent loggia with three arcades decorated with mosaics.

Five doors lead into the basilica, including a Holy Door on the left. Each of the 4 major basilicas in Rome has its own Holy Door which is opened by the Pope (or a Cardinal) only once every 25 years to symbolically mark the beginning of the Holy Year.

The Corinthian column in the forecourt of the basilica comes from the Basilica of Maxentius and Constantine (in the Roman Forum) and was moved to its present location by order of Pope Paul V in the early 17th century.

In the Piazza dell’Esquilino, you will also find an obelisk that originally stood at the entrance to the Mausoleum of Augustus.

The main nave is separated from the two side naves by Ionic-style marble and granite colonnades dated from the origins of the basilica.

Look up and you will see a frieze above the columns and mosaic panels dating from the 5th century and depicting biblical scenes on a gold background. Between the nave and the transept, the triumphal arch is also decorated with mosaics dating back over 15 centuries.

While you’re looking up, take the opportunity to admire the incredible coffered ceiling of the nave. Dating from the Renaissance, it is said to have been decorated with gold brought back from Christopher Columbus’ expedition to America and donated to the basilica by Queen Isabella of Spain.

Before leaving the nave, take time to look at the pavement of the basilica. It dates from the 12th century and is in the cosmatesque style (marble inlay typical of the Middle Ages).

Supported by red porphyry columns, the baldachin houses the high altar in which the relics of the Crib (or of the Holy Cradle) are kept in a reliquary made by Luigi Valadier in the 19th century.

Above the high altar, don’t miss the beautiful medieval mosaic of the Coronation of the Virgin designed by Jacopo Torriti at the end of the 13th century.

The Sistine Chapel – not to be confused with the famous chapel of the same name in the Vatican – is one of the two main chapels in the Basilica of Santa Maria Maggiore. Designed by the architect Domenico Fontana and richly decorated with frescoes and statues, it houses the tomb of Pope Sixtus V, as well as the remains of Pope Pius V.

At the entrance to the chapel (outside), don’t miss the Bernini family tombstone. This is the resting place of the incomparable Gian Lorenzo Bernini (whose incredible statues can be found at the Villa Borghese… a must!)

The Pauline Chapel (or Paolina in Italian) is named after none other than Pauline Bonaparte (sister of Napoleon Bonaparte), who was buried here alongside other prominent members of the Borghese family, including Pope Paul V. It is also where the remains of Pope Clement VIII are buried.

Built in 1611 by Flaminio Ponzio, this chapel faces the Sistine Chapel, located on the other side of the nave and from which it is inspired.

Getting to the Basilica of Santa Maria Maggiore

The Basilica of Santa Maria Maggiore is located on the Esquiline hill, a few steps from Termini station.

Opening hours of the Basilica of Santa Maria Maggiore

The Basilica of Santa Maria Maggiore is open every day from 7am to 6.45pm.

Entrance to the basilica is free. However, you will have to pay 3 € if you want to access the small museum on site.