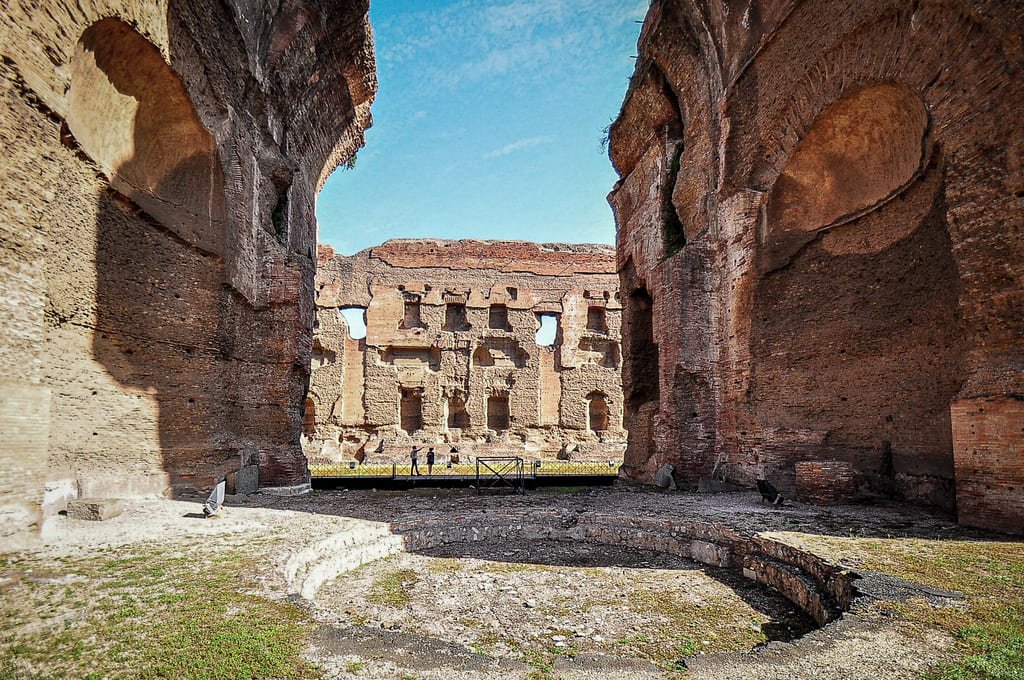 The Baths of Caracalla in Rome

A stone’s throw from the main ancient sites of the Italian capital, the Baths of Caracalla are a huge and surprisingly well-preserved thermal complex: the opportunity to get a good insight into the daily life of the Romans some 1800 years ago!

Brief history of the Baths of Caracalla

The origins of the Baths of Caracalla

While the construction of the Baths of Caracalla was most probably the idea of Emperor Septimius Severus, construction work took place under the reign of his son, Caracalla, between 212 and 216 AD.

To supply the thermal baths with water, Caracalla ordered the construction of the Aqua Antoniana, a derivation of the aqueduct of the Aqua Marcia. The water was then stored in 64 cisterns with a capacity of 80,000 liters each.

The construction of the imposing outer enclosure of the thermal baths was commissioned by Caracalla’s successors: Heliogabalus and Severus Alexander.

At the time of their construction, the Baths of Caracalla were the largest thermal complex in the capital. They were later be dethroned by the Baths of Diocletian, built between the 3rd and 4th centuries, but remained, according to ancient sources, the most beautiful baths in Rome. So much so that some Romans went so far as to describe them as one of the seven wonders of ancient Rome!

Far from being simple public baths, the Baths of Caracalla were in reality an immense complex dedicated to hygiene, well-being and relaxation.

In Antiquity, the Baths of Caracalla were indeed a meeting place conducive to discussion and socialization. Visitors could of course relax in the baths and get a massage, but also chat in the vast gardens, train at the palestra (a sports centre), study at the library… and even, according to some sources, have a good drink time in a brothel…

Apparently, the Roman’s conception of hygiene and well-being slightly differed from ours!

The decline of the Baths of Caracalla

The Baths of Caracalla remained active until the 6th century AD, when the Ostrogothic invaders destroyed the aqueduct supplying the baths with water.

The thermal baths then gradually fell into oblivion. Like many ancient Roman sites, they were looted in the Middle Ages and the Renaissance, and their materials were reused for new constructions.

The looters discovered incredible statues, including the Farnese Bull and the Farnese Hercules, now on display at the Archaeological Museum of Naples. Two large Egyptian gray marble basins similar to huge bathtubs – which can now be admired in Piazza Farnese in Rome – were also unearthed.

Short description of the Baths of Caracalla during Antiquity

During Antiquity, the Baths of Caracalla were one of the largest and most sumptuous complex in Rome.

Bathers navigated between several rooms and pools in a very specific order:

During Antiquity, the Baths of Caracalla were richly decorated with paintings, mosaics and sculptures. A beautiful mosaic representing athletes, discovered during excavations carried out in the 19th century, can be admired in the Vatican Museum.

The undergrounds of the thermal baths

The Baths of Caracalla also hid huge underground galleries where slaves worked in the midst of a large network of water pipes which ensured the proper functioning of the baths.

Excavations carried out in the 20th century have also revealed a Mithraeum, a temple to Mithras, a deity of Indo-Iranian origin whose influence extended into the Roman Empire. For the record, a temple of the same kind was also discovered in the cellars of the Palazzo Barberini.

Visiting the Baths of Caracalla

Despite their old age, the Baths of Caracalla have stood the test of time surprisingly well.

If the paintings, sculptures and mosaics have now mostly disappeared, a good part of the structure of the thermal baths remains untouched and gives visitors a good overview of the monumental dimension of the thermal complex during Antiquity.

If you’re planning on visiting the thermal baths on your own, don’t miss the countless information panels in English and Italian. But Captain Ulysses warmly recommends that you opt for the audio guide, which will allow you to better understand the complex’s layout and learn more about the rich history of this emblematic thermal complex.

The visit will take at least an hour, more if you went to take your time and stroll in the park.

Getting to the thermal baths

The Baths of Caracalla are located near the majority of the Italian capital’s ancient sites, a short walk from the Circus Maximus and the Palatine Hill.

The nearest metro station is Circo Massimo on line B. Buses number 118, 160 and 628 also stop near the site.

Opening hours of the Baths of Caracalla

The Baths of Caracalla are closed on Monday afternoons (from 2 p.m.), they are open all day the rest of the week. Hours vary according to seasons:

Prices and guided tours of the Baths of Caracalla

Although the Baths of Caracalla are less crowded than some of the more well-known ancient sites (the Colosseum, the Roman Forum, the Palatine Hill), it may still be worth booking your tickets in advance, especially if you are visiting Rome during the high season and the school holidays.
Find out more: skip-the-line ticket for the Baths of Caracalla.

If you are a history buff and want to learn more about the baths and ancient Rome, Captain Ulysses recommends this guided tour : Guided tour of the Baths of Caracalla and the Circus Maximus .