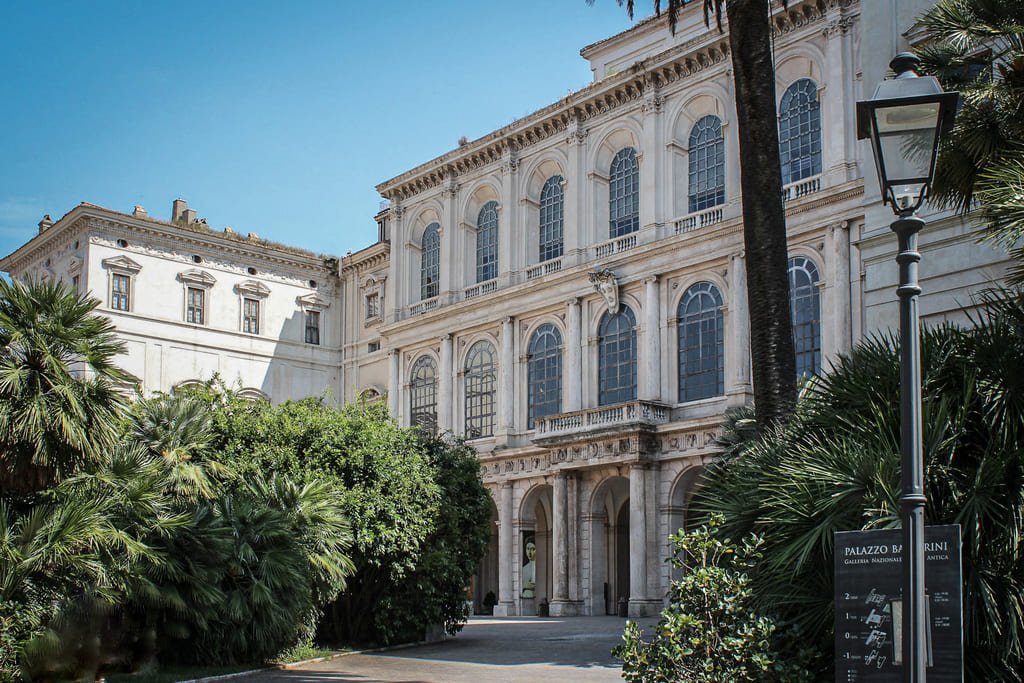 The Palazzo Barberini in Rome

Built in the 17th century at the request of Pope Urban VIII, the Palazzo Barberini is a Baroque jewel designed by some of the greatest architects of their time.

The palace now houses the National Gallery of Ancient Art: a marvelous museum whose collections will no doubt delight all art lovers. Among the artist exhibited in the museum, you’ll find: Raphael, Caravaggio, Titian, Tintoretto, Poussin, El Greco…

Brief history of the Palazzo Barberini

The construction of the Palazzo Barberini

In 1625, Pope Urban VIII – Maffeo Barberini – bought the land on which the Palazzo Barberini stands today from the Sforza family and commissioned the architect Carlo Maderno to design a grand Baroque palace.

When Maderno died in 1629, his nephew, Francesco Borromini, who had until then assisted him with the construction work, took over the reins of the project. Bernini joined the adventure and completed the Palazzo Barberini in 1633.

Not content with entrusting the construction of his palace to the greatest architects of his time, Urban VIII also called on the emblematic artist Pietro da Cortona for the decoration of the building: Cortona designed the huge fresco adorning the ceiling of the large living room, the Triumph of Divine Providence.

The Palazzo Barberini through the centuries

Confiscated from the Barberinis by Pope Innocent X, successor of Urban VIII (of whom you’ll incidentally find an incredible portrait by Velasquez at the Doria-Pamphilj Gallery), the palace was finally returned to the Barberini family in 1653 .

More than a century and a half later, between 1814 and 1819, the palace became the residence of King Charles IV of Spain, who was forced to into exile and had to abdicate in favor of his son, Ferdinand VII, in 1808.

In 1936, a mithraeum, a sanctuary of the cult of Mithras, was discovered in the cellars of the Barberini Palace.

In 1949, the Italian State bought the palace. It has since then housed the majority of the collections of the Galleria Nazionale d’Arte Antica, which are divided between the Palazzo Barberini and the Palazzo Corsini.

Visiting the National Gallery of Ancient Art at the Palazzo Barberini

Nestled halfway between the Borghese Gallery and the Roman Forum, the Palazzo Barberini is worth a visit as much for its sumptuous Baroque architecture as for its magnificent art collections.

The Palazzo Barberini, a Baroque gem

One of the most striking features of the palace are its facades, reflecting building’s two functions: official palace and villa.

The facade facing the Piazza Barberini is sober and austere, representing the official function of the building.

At the back, the facade adorned with columns overlooking the vast gardens is worthy of the most beautiful Roman villas (like the magnificent Villa Farnesina, which the Captain also warmly recommends visiting).

Among the most striking architectural elements of Palazzo Barberini, be sure to have a look at:

The collections of the National Gallery of Ancient Art in Rome

The National Gallery of Ancient Art boasts one of the largest collections of paintings in Italy.

The museum exhibits works ranging from the 11th to the 18th century, but is particularly famous for its paintings from the 15th, 16th and 17th centuries with in particular:

Getting to the Palazzo Barberini

The Palazzo Barberini is located halfway between the Galleria Borghese and the Roman Forum. The nearest public transports are:

Admission tickets are for Palazzo Barberini are: