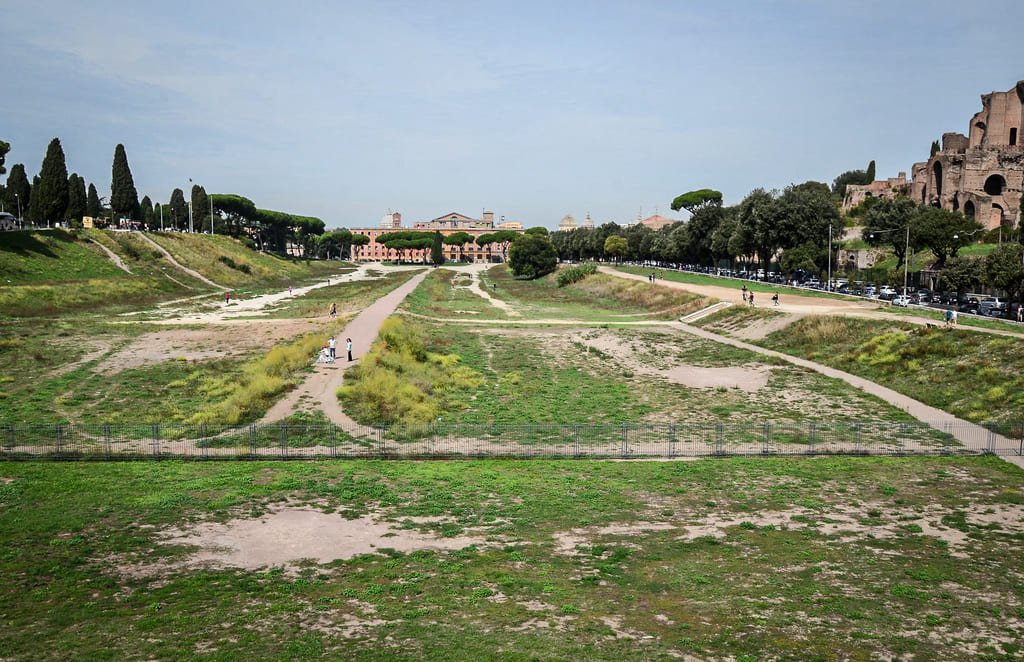 The Circus Maximus in Rome

Nestled in the Valley of Murcia, between the Palatine and Aventine hills, the Circus Maximus (Circo Massimo in Italian) is the oldest and largest hippodrome in ancient Rome.

Brief history of the Circus Maximus

The Circus Maximus in Antiquity

The Circus Maximus under the Roman Monarchy and the Roman Republic

According to Roman tradition, the origins of the Circus Maximus dates back to the very beginning of the 6th century BC. The stadium is said to have been built at the request of Tarquin the Elder, but was then only a vast esplanade without any permanent infrastructure.

It wasn’t until the 4th th century BC, during the Roman Republic, that the Circus Maximus was fitted with permanent wooden structures, including starting gates and grandstands. It was also around this time that the spina was built, a central dividing ridge dividing the track into equal parts, where chariot races took place.

The Circus Maximus under the Roman Empire

At the end of the 1st century BC, Julius Caesar undertook major construction works to enlarge the circus. His successor, Augustus, continued in his footsteps and erected in the stadium an obelisk brought back by Roman troops from Heliopolis in Egypt.

But the Circus Maximus was partly destroyed in several fires. The first stone bleachers were built much later, at the request of the emperor Claude in the 1st century AD. His successors continued to replace the old wooden seats with seats made of stone and marble.

Despite these improvements, the construction of the Colosseum in the 1st century AD initiated the decline of the Circus Maximus.

That being said, the circus was completely renovated in the 2nd century AD under the reign of Trajan, and then again in the 4th century at the request of Emperor Constantine I. His successor, Emperor Constantine II, had a second obelisk erected on the spina, brought from Karnak in Egypt.

The Circus Maximus in the Middle Ages and the Renaissance

The Circus Maximus was abandoned in the 6th century AD and gradually fell into oblivion. The last chariot race took place in 549 during the reign of the Ostrogothic king Totila.

In the Middle Ages and later in the Renaissance, the Circus Maximus was looted and its materials reused for new constructions.

The Egyptian obelisk installed in the hippodrome at the request of Emperor Augustus in the 1st century BC was transferred to Piazza del Popolo. The obelisk erected by Emperor Constantine II in the 4th century was relocated to the square in front of the Lateran Palace.

Today, the Circus Maximus has again become quite a symbolic place for the inhabitants of the Italian capital, who meet here for huge concerts (Genesis, the Rolling Stones, Bruce Springsteen), festivals, open-air cinema sessions and large popular gatherings.

The Romans celebrated Italy’s victory at the World Cup in 2006 at the Circus Maximus!

Games, chariot races and processions at the Circus Maximus

Don’t be fooled by the name “Circus Maximus”! You’ll find no clowns nor acrobats here! In ancient Rome, a circus was a vast stadium similar to a hippodrome where various games, races and processions were organized.

Short description of the Circus Maximus during Antiquity

During Antiquity, the track of the Circus Maximus extended over 600 meters long for a width varying between 80 and 200 meters (the circus was enlarged over the centuries).

Covered in sand, the track was split in two by a spina decorated with statues. It was around this spina that races and processions took place.

A ditch lined with a palisade separated the arena from the stands in order to protect the spectators from any accident, in particular due to the presence of wild animals.

The bleachers, first made of wood, were replaced over the centuries by stone stands.

Many shops were also located to the west of the circus, on the Palatine Hill.

The Cirus Maximus has unfortunately not stood the test of time as valiantly as the Colosseum, the Roman Forum or the Palatine Hill.

All that remains of the mythical Roman stadium is a vast grassy expanse dotted with a few remains of bleachers. But the shape of the track is still perfectly discernible and allows visitors to imagine the immensity of the stadium during Antiquity.

While it may not be one of the top attractions in Rome, the Circus Maximus is well worth a visit if you’re staying long enough in the Italian capital.

The old hippodrome is located on the Via del Circo Massimo, a short walk from the Palatine Hill and the Bocca della Verità.

The nearest metro station is Circo Massimo (line B).