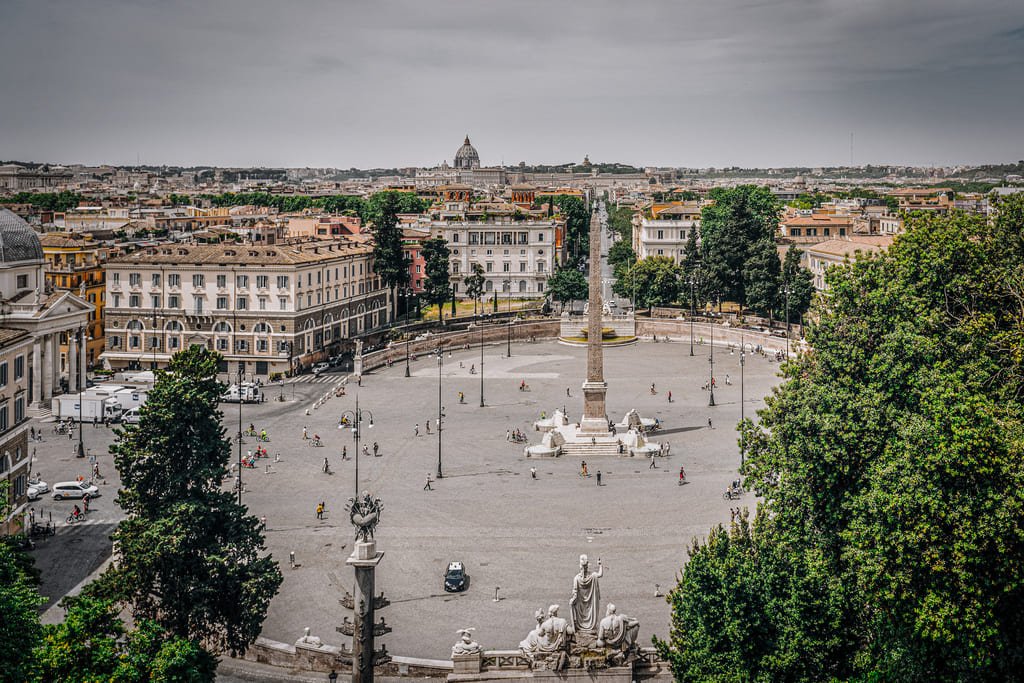 Nestled in the northern part of Rome’s historic centre, the Piazza del Popolo was once the gateway to the Italian capital.

Although it has long since lost this role, the Piazza del Popolo remains one of the most emblematic squares in the “Eternal City” and is well worth a visit! Follow the guide!

Brief history of the Piazza del Popolo in Rome

At the end of the 16th century, the builder pope Sixtus V – Felice Peretti – launched a vast development program for the Piazza del Popolo.

The Porta Flaminia – later renamed Porta del Popolo -, located in the square, was, until the apparition of the railway, the gateway to the Eternal City for all travellers coming from the north on the Via Flaminia.

The Piazza del Popolo was therefore the very first thing that visitors saw when arriving in Rome, and it had to live up to the legendary reputation of the Eternal City.

Over the next three centuries, Sixtus V’s successors continued his great development project. At the beginning of the 19th century – between 1811 and 1823 – Popes Pius VII and then Leo XII entrusted the neo-classical architect Giuseppe Valadier with the difficult task of remodelling the Piazza del Popolo to give it the symmetrical and harmonious appearance that we know today.

Previously trapezoidal in shape, the square adopted an elliptical plan at the crossroads between Via Flaminia to the north, the Trident formed by Via di Ripetta, Via del Corso and Via del Babuino to the south, the Pincio hill to the east and Via Ferdinando di Savoia to the west.

Valadier destroyed some of the buildings lining the square to replace them with more harmonious constructions, planted trees and designed a large staircase to connect the Pincio gardens to the Piazza del Popolo below.

Like the Campo de’ Fiori, the Piazza del Popolo also used to be a place of public executions, the last of which took place in 1826.

If the name Piazza del Popolo is now translated into English as “People’s Square”, it is actually originally derived from the Latin word populus meaning “poplar”!

Integrated in the Aurelian Wall – a defensive wall built during the reigns of the emperors Aurelian and Probus in the 3th century AD. – The Porta del Popolo as we know it today was built in 1475 at the request of Pope Sixtus IV, on the site of an ancient Roman gate (the Porta Flaminia).

In the 16th century, the Porta del Popolo was remodelled by architect Nanni di Baccio Bigio, who drew his inspiration from the Arch of Titus, built in the 1st century AD under the reign of Emperor Domitian.

The inner doorway – overlooking the square – is the work of sculptor Gian Lorenzo Bernini and pays homage to Queen Christine of Sweden (converted to Catholicism), who visited Rome with pomp in 1655.

In 1879, the two towers flanking the gate were destroyed. Eight years later, two side arches were added to the gate to facilitate the passage of the ever-increasing number of travellers.

The obelisk in the centre of the Piazza del Popolo

Standing in the centre of the square, the obelisk was a war booty brought back from Egypt by the victorious armies of the Emperor Augustus. Sculpted during the reigns of Pharaohs Seti I and Ramses II, the obelisk was erected in the Circus Maximus before being damaged in the late Antiquity during the barbarian invasions.

In 1587, while Pope Sixtus launched a vast programme to develop the Piazza del Popolo, architect Domenico Fontana rescued the obelisk from oblivion and restored it to former its glory.

The obelisk is 26.90 metres / 85.3 ft high (36.50 metres /118 ft including the base and the cross at the top). In 1823, four fountains representing lions and featuring the coat of arms of the then newly elected Pope Leo XII were added around the obelisk.

Adjacent to the Porta del Popolo, the Church of Santa Maria del Popolo (St. Mary of the People in English) was built at the very end of the 11th century on the site of the tomb of Emperor Nero, on the orders of Pope Paschal II.

Four centuries later, the church was completely rebuilt by the architects Baccio Pontelli and Andrea Bregnon.

The Church of Santa Maria del Popolo is heaven on earth for art lovers. Renovated in the 17th century by Bernini, it comprises a chapel designed by Raphael (the Chigi Chapel) the dome of which is adorned with a monumental mosaic representing the Creation of the World. The church also houses two paintings by Caravaggio: The Conversion of Saint Paul on the Road to Damascus and The Crucifixion of Saint Peter.

A must-see for all art and history lovers!

Built on either side of the Via del Corso by Carlo Rainaldi, Bernini and Carlo Fontana, the churches of Santa Maria dei Miracoli (completed in 1681) and Santa Maria in Montesanto (completed in 1679) appear at first sight to be identical in every respect.

But don’t be fooled by appearances: there are some differences in the layout as well as on the façade of these two baroque churches! Can you spot them all?

The fountains in the Piazza del Popolo

Like many Roman squares ( Piazza Navona, Piazza di Spagna…), the Piazza del Popolo is dotted with fountains sculpted by some of the greatest Italian artists.

So don’t miss the opportunity to admire:

Located on the Pincio hill and accessible by the wide ramp designed by Giuseppe Valadier in the 19th century, the Pincio terrace offers a breathtaking view of the Piazza del Popolo.

A few steps from the Galleria Borghese and Piazza di Spagna, Piazza del Popolo marks the northern limit of the historic centre of the Italian capital.