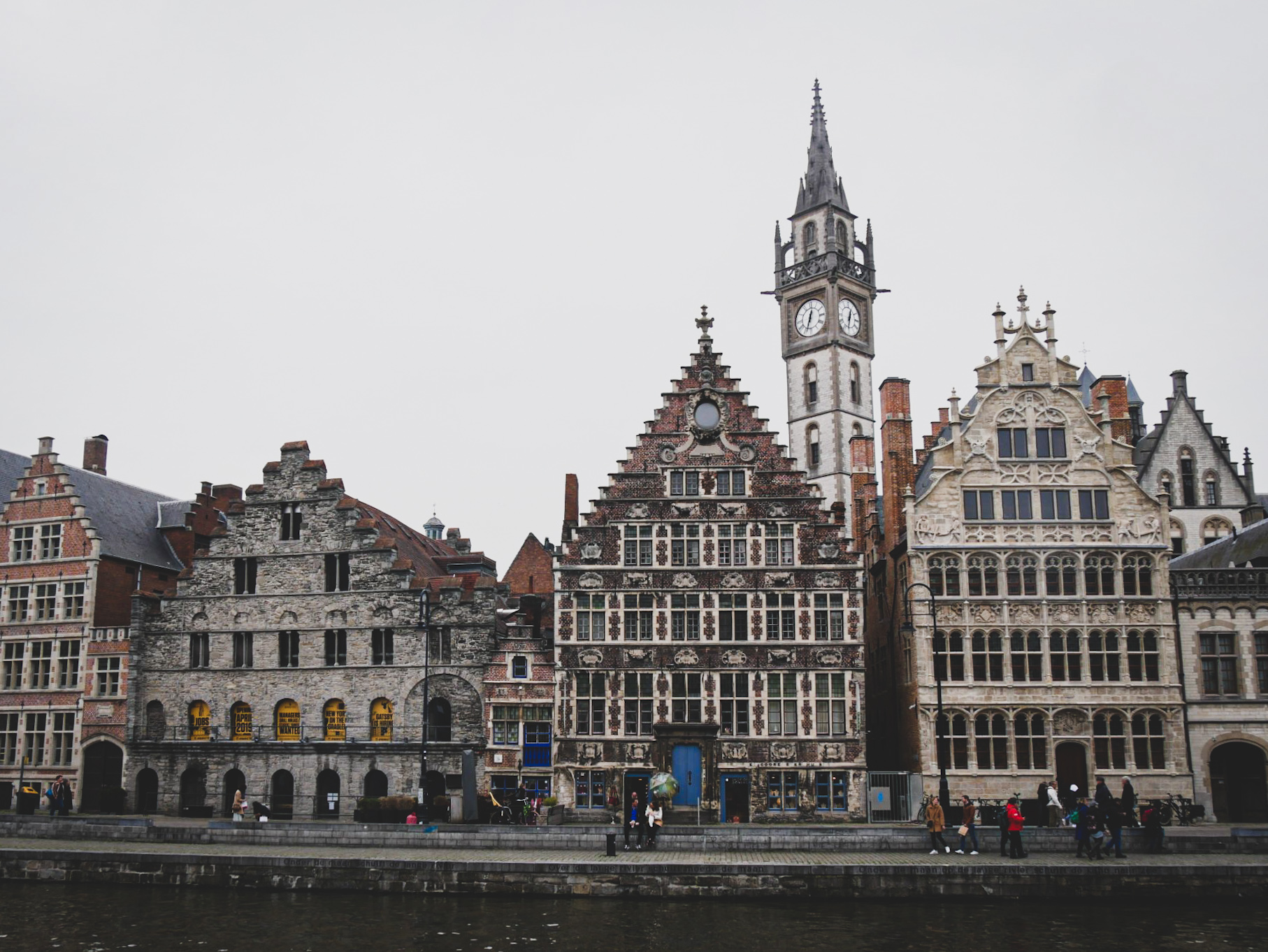 ⚓
Accommodation, flights, activities, cruises …
You’ll find all the Captain’s suggestions in the section
Captain Ulysses’ favourites at the very end of the article!

Ghent and its canals in a few words

A few words about the region’s geography

Located in Belgium’s Flemish region, the city of Ghent was built at the meeting point of 2 rivers: the Lys (or Leie) and the Schelde. The city is criss-crossed by numerous canals, the most famous of which are the Lieve and the Lys.

A short history of the canals of Ghent

The city’s history began in the 7th century AD when Saint Amand decided to build an abbey at the meeting point of the Lys and the Schelde.

As centuries went by, the city’s strategic location allowed it to thrive and become a key economic hub in Europe: between the 9th and the 16th centuries, the city was even the 2nd biggest city in Europe, right after Paris. Ghent then counted 60,000 inhabitants and was more populated than London!

The city prospered thanks to trade, mostly in the textile sector. Ghent’s canals played a key role in the city economic vitality. The names of some of the city quays and streets are directly inherited from this period, just like “Korenlei”, which means “grain wharf” in Flemish.

After the 16th century, the city lost access to the sea and progressively declined.

Exploring Ghent’s in the Hungarian capital

With their picture-postcard facades, Graslei and Korenlei face each other on opposite banks of the River Lys. Captain Ulysses highly recommends that you take the time to explore the city’s quaint waterfront.

On sunny days, there’s nothing nicer than having a cup of coffee or a pint of beer on one of the waterfront’s many terraces.

The oldest building on Graslei, – which is called Spijker -, located on #10 of Graslei, is said to date back to the 12th century. Most of the buildings along Graslei and Korenlei were built in the Middle-Ages, even though they may not look medieval as the majority was remodelled in the following centuries (mainly the 17th and 18th centuries).

Built in the early 20th century, St Michael’s Bridge spans the River Lys right by Graslei and Korenlei. From the bridge, the view on the river and the quays is quite simply stunning, with Gravesteen Castle, St Michael Church, St Nicholas Church, the Belfry and Saint Bavo Cathedral in the distance.

Much smaller (and quainter) than St Michael’s Bridge, Grasbrug Bridge also offers a panoramic view of the Lys River and the waterfront.

Captain Ulysses is an old sea salt and always enjoys a boat ride: he can only recommend that you too embark on a boat in Ghent to discover the city’s top sights and learn more about its history.

Gravensteen, the Castle of the Counts of Flanders

Nestled above the River Lieve, the Castle of the Counts of Flander in one of the most famous monuments in Ghent. Built in 1180 on the spot where ancient fortifications dating back to the 9th century used to stand, Gravesteen Castle is the only remaining fortified castle in Flanders.

It originally served as the Counts’ residence but was turned into a prison in the 14th century before the Holy Roman Emperor Charles V decided to make it his residence again. Much later, in 1949, the castle was stormed by a group of rebellious students!

Inside the castle, visitors are free to explore the guard house, the fortified walls, the dungeon, the Counts’ residence and the stables. The castle also counts a vast exhibition on ancient instruments of torture… chilling!

Ghent is easy to drive to from the main cities in Northern France and Belgium:

If you’re planning on renting a car in Belgium, Captain Ulysses highly recommends that you rent it through Rentalcars: this website allows you to compare the offers from numerous companies (Hertz, Europcar…) in order to find the best deal.

Getting to Ghent by bus

The bus is a fairly handy and affordable way of getting to Ghent. You’ll find daily busses departing from Paris, Brussels, Lille and Antwerp.

Getting to Ghent by train

Find out more about fares and operating times on Omio.

Last but not least: day tours are a great way to visit Ghent. Departing from Brussels in the morning, they’ll take you to Bruges and Ghent before getting back to Brussels at the end of the day.

🎟️ Activities: If you want to book attraction tickets and tours in Ghent, the Captain suggests that you have a look at the activities listed on Tiqets and GetYourGuide. Skip-the-line tickets, guided tours, food tours, cruises… : you’ll be able to book the best activities in Ghent!

⛵ Cruises: You can believe Captain Ulysses when he says that cruises in Ghent are a must-do! You can find out more about operating hours and prices here.

🚘 Car rental: If you are planning on renting a car in Belgium, Captain Ulysses strongly advises you to have a look at the website Rentalcars, on which you’ll be able to compare countless offers to find the best deal (Hertz, Europcars, Avis…).

✈️ Flights, trains & buses: While Ghent does not have an airport, the city is quite close to Brussels. To book your flights, Captain Ulysses recommends having a look at Skyscanner to find the best deal. You can also get to Ghent by bus or train. Find out more about fees and operating hours on Omio.

The House Of Terror In Budapest
3 min read