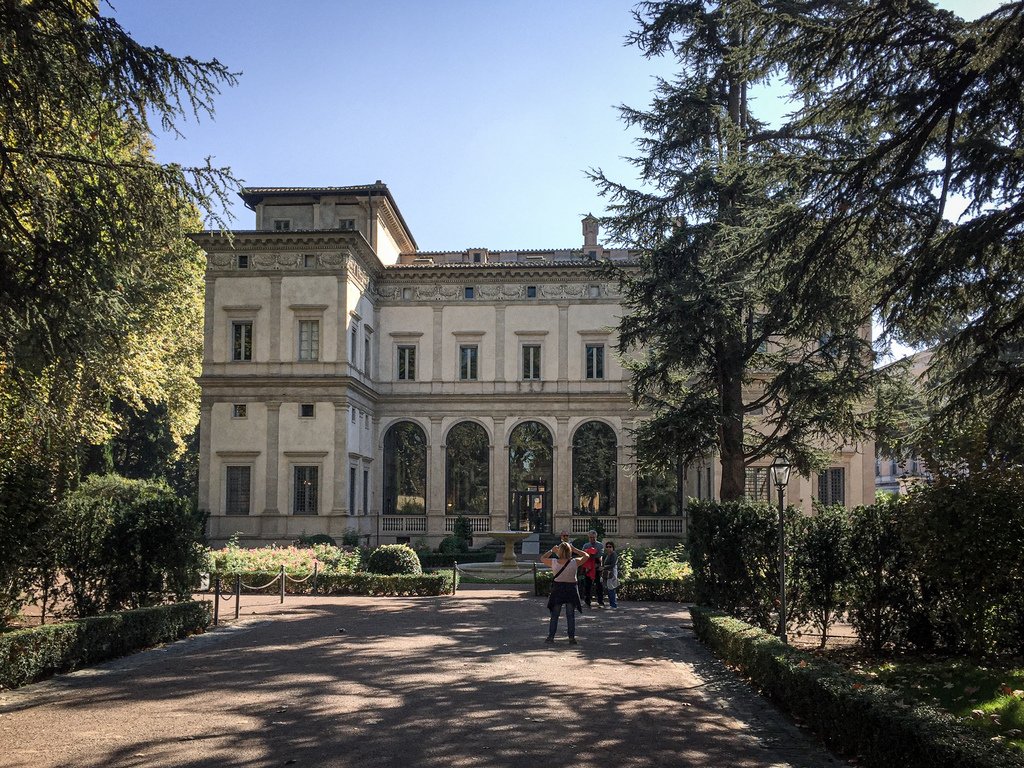 The Villa Farnesina in Rome

Nestled along the Tiber, in the very beautiful district of Trastevere, the Villa Farnesina is a sumptuous Renaissance palace whose walls are covered with frescoes painted by great Italian masters (Raphael, Baldassare Peruzzi, Giovanni Antonio Bazzi aka Sodoma…) A true gem!

Brief history of the Villa Farnesina

The origins of the Villa Farnesina

Built between 1505 and 1511 at the request of a wealthy Sienese banker, Agostino Chigi (who was also Pope Julius II’s treasurer), Villa Farnesina is the work of architect Baldassare Peruzzi. At the time, it was one of the first Roman villas built in the “suburbs” of the capital.

To decorate his brand new palace, the owner called on some of the greatest painters of his time: Raphael, Peruzzi (who also designed the architecture of the villa), Sodoma, Sebastiano del Piombo, Giovanni da Udine, Giulio Romano or Giovan Francesco Penni.

The Villa Farnesina was then famous throughout Rome for its sumptuous evenings and princely celebrations. Some even say that the guests were invited to throw the gold and silver dishes into the Tiber at the end of dinner. According to legend, Agostino Chigi still took the trouble to have nets placed at the bottom of the Tiber to recover his precious plates. There are limits to profligacy!

On the death of Agostino Chigi in 1520, the villa was abandonned. During the sack of Rome in 1527, it was requisitioned by mercenaries – lansquenets – who left some traces on the walls of the villa: scribbled graffitis can still be spotted around the villa.

Cardinal Alexander Farnese bought the palace in 1580 and gave the villa its current name. It was called “Villa Farnesina” so as not to be confused with Palazzo Farnese, located on the opposite bank of the Tiber. According to legend, the Farnese family entrusted Michelangelo with the task of building a bridge to connect their two properties… however, nothing came of it.

In the 18th century, the villa became the property of the Bourbons of Spain and later of the Kingdom of the Two Sicilies. In the 19th century, the Spanish ambassador Bermudez de Castro di Ripalta bought in turn the Villa Farnesina.

The Italian State bought the villa in the 1920s. It is now partly open to the public and houses the headquarters of the Academy of Lynceans, the oldest scientific academy in Europe (located in the past in the Palazzo Altemps).

The exterior of the villa

The facade of the villa, with its loggia – a a roofed area attached to the house – and its Tuscan pillars, was quite unusual for the time. The building is U-shaped, with two small wings on either side of the main building.

The Loggia of Galatea – This loggia is named after the fresco painted by Raphael in 1613 and representing the Triumph of Galatea. The story goes that Galatea, in love with the shepherd Acis, repelled the advances of the Cyclops Polyphemus, who killed her lover out of spite.
Agostino Chigi’s horoscope, painted on the ceiling of the loggia, is the work of Baldassare Peruzzi. The other mythological scenes in the room were painted by Sebastiano del Piombo.

The Frieze Room – Unsurprisingly, the Frieze Room is named after the frieze that wraps around the top of the walls of the room. Designed by Peruzzi in 1508, the frieze depicts several mythological scenes including the labors of Hercules.

The Perspectives’ Hall – Decorated by Baldassare Peruzzi in 1519, this hall located on the first floor of the villa is decorated with urban and rural scenes punctuated by trompe-l’oeil columns. Don’t miss the frieze depicting mythological scenes, nor the fireplace with its beautiful fresco of Vulcan.

The Room of the Marriage of Alexander and Roxana – The final room in Villa Farnesina open to the public was originally Agostino Chigi’s bedroom. It is named after the huge fresco covering the north wall and designed by Giovanni Antonio Bazzi, known as Sodoma.

The gardens of the Villa Farnesina

Before leaving, be sure to take a stroll through the villa’s beautiful Italian gardens: an oasis of freshness in the heart of the Italian capital.

Located in the Trastevere district, Villa Farnesina is easily accessible on foot, by bus (lines 23 and 280) or by tram (line 8).