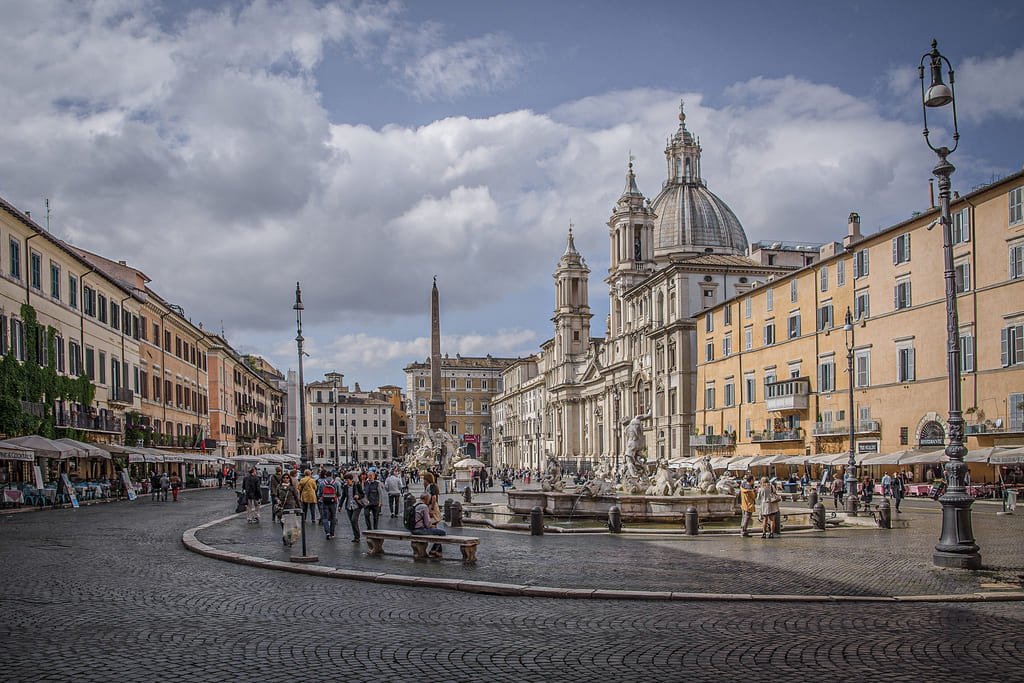 Located just a few steps from the Pantheon and Campo de’ Fiori, Piazza Navona is without doubt one of the most beautiful squares in the Roman capital.

Lined with cafés, ice cream parlors and restaurants, this Baroque masterpiece is a meeting place for strollers, tourists and foodies.

The Stadium of Domitian

In 86 AD, the Emperor Domitian – of the Flavian dynasty, famous for having built the Colosseum – had a stadium built on the site of the current Piazza Navona.

With a capacity of 30,000 spectators, the Stadium of Domitian was dedicated to Greek-style games: pugilism, discus throwing, javelin throwing, running…

In late Antiquity, the stadium was abandoned and gradually fell into ruin. As was customary in the Middle Ages, the building was dismantled over the centuries and its materials (stone blocks, etc.) reused for new constructions. For the record, this is how blocks of travertine from the Colosseum can be found in Saint Peter’s Basilica or in Palazzo Venezia!

🤔 Where does the name of Piazza Navona come from? 🤔

The current name of Piazza Navona is derived from its Latin name: in agones, which means “place where the games take place”. Over the centuries, the name of the square has therefore evolved: in agones → nagone → navone → navona.

The name of the church of Saint Agnes in Agone, located in Piazza Navona, is also derived from the square’s original name.

In the 17th century, the Stadium of Domitian has entirely disappeared and been replaced by a vast esplanade where a market was held regularly.

In the purest tradition of papal builders, Pope Innocent X – Giovanni Battista Pamphili – launched a vast rehabilitation project and called on the most famous sculptors and architects of the time. The Fountain of the Four Rivers is the work of Gian Lorenzo Bernini. Bernini’s great rival, Francesco Borromini, was entrusted with the construction of the church of Santa Agnese in Agone.

Today, Piazza Navona is heaven on earth for strollers. With its countless cafés and restaurants, the beautiful baroque square is perfect to take the pulse of the city while sipping a coffee or a glass of wine.

For the record, Piazza Navona was voted the 3rd most beautiful square in the world by the Project for Public Spaces in 2005.

In short, Piazza Navona is undoubtedly one of the top tourist attractions in the Eternal City!

Although the Stadium of Domitian disappeared many centuries ago, the present Piazza Navona retains its exact shape. Narrow and elongated (276 metres/905 ft long and 54 metres/177 ft wide), the square is lined with refreshing fountains and splendid Baroque buildings.

The Fountain of the Four Rivers

Designed by Bernini – whose sumptuous sculptures can be admired in the Borghese Gallery – the Fountain of the Four Rivers (Fontana dei Quattro Fiumi) is an absolute masterpiece.

Each of the four monumental statues in the fountain represents a river, symbolising the four continents known in the mid-17th century: the Danube (Europe), the Nile (Africa), the Ganges (Asia) and the Rio de la Plata (America). The Oceanian continent is not represented, as it had simply not been discovered at the time!

A little riddle: why is the Nile represented with a veiled face?

Well, because just like the Oceanic continent, its source had not yet been discovered by explorers!

The obelisk on top of the fountain comes from the circus of Maxentius, built in the 4th century on the Appian Way (Via Appia), south of Rome. The name of the emperor Domitian is inscribed on the obelisk in Egyptian hieroglyphics.

The obelisk is also surmounted by a dove holding an olive branch: an emblem of the Pamphili, the family of Pope Innocent X (who commissioned the development of the Piazza Navona).

According to legend, the statue representing the Rio de la Plata stretches out its arm for fear that the church of Saint Agnes in Agone, located opposite the fountain and built by Bernini’s rival, might fall down.

In reality, the church was built after the Fountain of the Four Rivers…

The church of Saint Agnes in Agone

Built between 1652 and 1657, the Church of Saint Agnes in Agone (Chiesa di Sant’Agnese in Agone) was designed by Francesco Borromini, Bernini’s great rival, as well as the architects Girolamo and Carlo Rainaldi.

The church’s concave facade is flanked by two belfries and topped by a cupola.

Inside, the dome is covered with frescoes depicting the Glory of Paradise by the Roman artist Ciro Ferri. Pope Innocent X is buried to the left of the main altar.

From the church it is also possible to access the remains of the Stadium of Domitian, located under Piazza Navona.

Former home of the Pamphili family, Palazzo Pamphili – not to be confused with Palazzo Doria-Pamphilj, located on Via del Corso, which Captain Ulysses highly recommends visiting – is a beautiful baroque palace built in the mid-17th century.

It now houses the Brazilian Embassy.

Designed in 1575 by the Italian architect Giacomo della Porta, the Fontana del Moro (Fountain of the Moor) represents a Moor surrounded by tritons blowing into large shells.

The statue of the Moor was not present on the original fountain. Made by Giovanni Antonio Mari after a design by Bernini, it was only added in 1653.

The statues visible today are copies: the originals were transferred to the Borghese Gallery at the end of the 19th century.

The Fountain of Neptune

The third and last fountain in Piazza Navona, the Fountain of Neptune, is also the work of Giacomo della Porta. But he only made the basin. The sculptures are much more recent: made by Gregorio Zappalà and Antonio Della Bitta, they date from 1878.

The Tre Scalini ice cream parlour and its famous tartufo

While Piazza Navona is heaven on eartj for art and architecture lovers, it is also a paradise for strollers and gourmets.

Among the many cafés and restaurants in the square, don’t miss the legendary Tre Scalini ice cream parlour: its tartufo – a very dense chocolate truffle ice cream – has made it famous beyond Italy’s borders.

Fun fact: Piazza Navona is filmed 24 hours a day and the images are available on the internet. To get a nice glimpse of the beautiful baroque square, it’s here.

Piazza Navona is located on the Campus Martius, a few steps from the Pantheon, Palazzo Altemps and Campo de’ Fiori.

The nearest metro station is Barberini (on line A).

If your budget allows, you will find in a small street, at the corner with Piazza Navona, one of the most beautiful and emblematic hotels in Rome: Hotel Raphael.