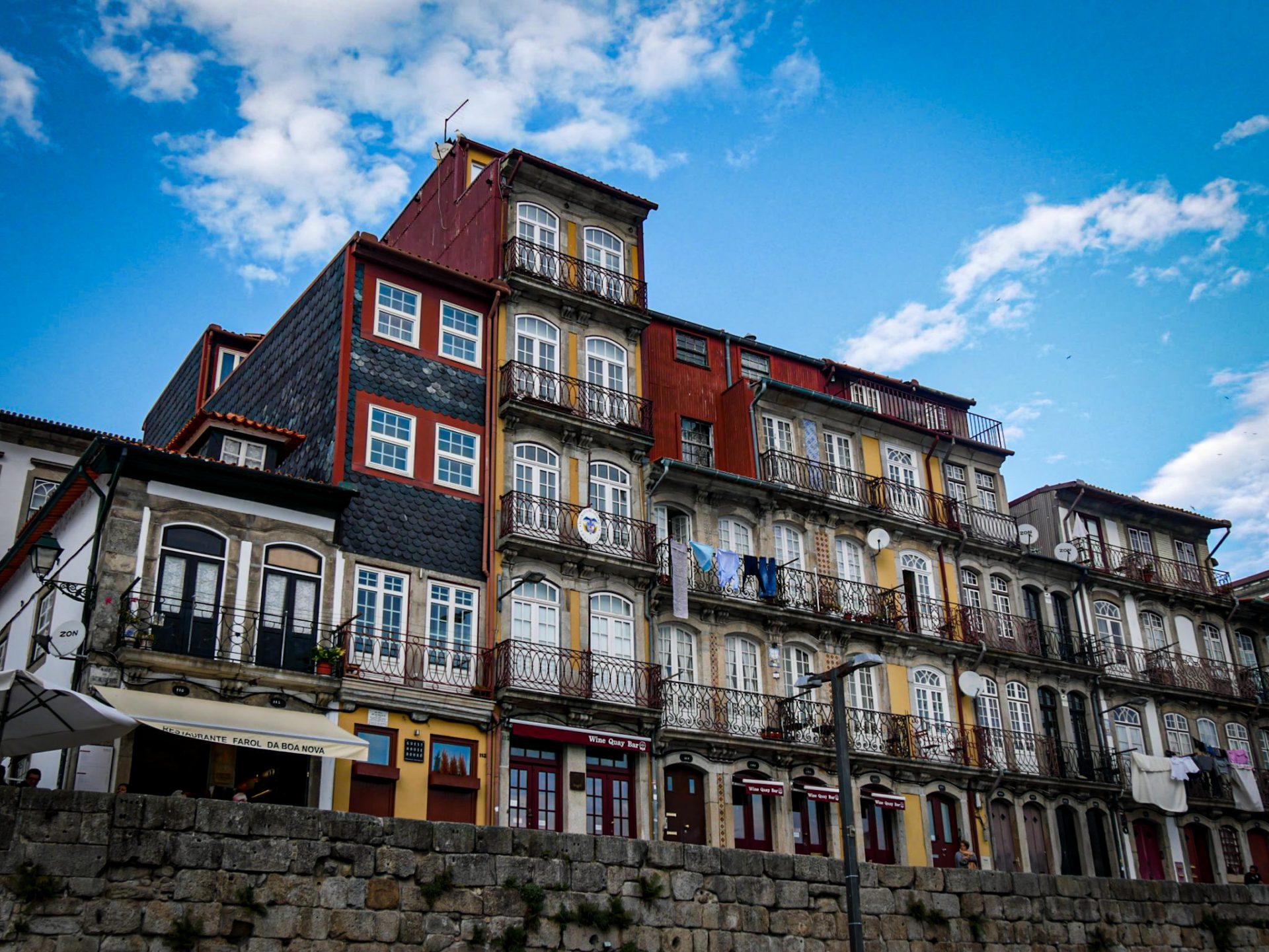 The Ribeira district in Porto

Listed as a UNESCO World Heritage Site since 1996, Porto’s Ribeira district, nestled on the banks of the Douro, is one of the city’s highlights! Follow the guide!

The Ribeira district in a nutshell

On the banks of the Douro, Ribeira is undoubtedly the most iconic area in Porto. And for good reason: located in the lower town, it is home to many of the most emblematic monuments in the “Northern Capital”, including the Porto Cathedral and the Palacio da Bolsa.

Ribeira is a lively district where you’ll find countless restaurants, bars and shops, while many street artists give performances by the Douro for the greatest pleasure of locals and visitors alike.

In short, the district of Ribeira is the perfect spot for a nice walk by the river… To discover Ribeira, nothing better than putting away your map and getting lost in the labyrinthine alleys of the neighborhood.

Visiting the Ribeira district: the best things to do

In the heart of the Ribeira district, the quays of the Douro — from west to east the Cais da Estiva followed by the Cais da Ribeira — rank very high on the list of the Captain’s favorites in Porto.

Lined with historic and colorful buildings, the quays of the Ribeira district exude charm and authenticity.

Many cruises on the Douro depart from here. During high season in particular, the boats fill up at high speed: the Captain therefore recommends that you rbooking your tickets in advance!

Nestlef on the banks of the Douro, the Ribeira Square (Praça da Ribeira in Portuguese), which dates back to the Middle Ages, is one of the oldest squares in the city.

It is now lined with shops, cafes and restaurants. Street artists – often very talented – perform there summer and winter.

Built at the end of the 19th century, the Dom Luis I Bridge (or Luis I Bridge) marks the limit of the Ribeira district to the east.

Inspired by the work of Gustave Eiffel, this huge steel bridge spans the Douro River between the municipalities of Porto and Villa Nova de Gaia (where most of the Port wine cellars are located).

The view from the upper level, especially at sunset, is quite simply stunning!

💡 Find out more 💡
Find the complete history of the bridge and all the advice of Captain Ulysses in his detailed article on the Dom Luis Bridge.

Get ready to be amazed by the station’s sumptuous azulejos (blue and white earthenware tiles typical of the Iberian Peninsula)!

North of the Ribeira district, the São Bento Station is a masterpiece of azulejos art.

Built between the end of the 19th and the beginning of the 20th century, this extraordinary railway station is one of the most iconic monuments in Porto. But be warned: you should definitely head to the station early in the morning if you want to avoid the hordes of tourists that parade in the station non-stop throughout the day.

💡 Find out more 💡
To learn all about the history and architecture of this emblematic monument, check out the Captain’s detailed article on São Bento Station.

To the west of the Ribeira district, the Palacio da Bolsa (“Stock Exchange Palace” in English) is well worth a visit!

Built by the Associação Comercial do Porto , the Commercial Association of Porto, in the 19th century, this majestic palace is an architectural masterpiece blending English and neo-classical influences.

The highlight of the visit: the sumptuous Arab Room, a vast room entirely covered with stucco decorated with gold leaf.

Interested in visiting the Palacio da Bolsa? You’ll necessarily have to book a guided tour at least a few hours in advance — if not the day before.

💡 Find out more 💡
Discover all the secrets of this sumptuous palace in Captain Ulysses’ detailed article on the Palacio da Bolsa. FYI, you must book your visit in advance : you can buy your tickets here.

The Church of Sao Francisco

A stone’s throw from the Palacio da Bolsa, to the west of the Ribeira district, the Church of São Francisco is an architectural gem blending Gothic and Baroque styles.

Built between the 14th and 15th centuries, the church was expanded over the centuries and underwent major renovation works in the 18th century.

💡 Find out more 💡
Find out more about the complete history of the building and all the advice of Captain Ulysses in his detailed article on the Church of São Francisco.

The Porto Cathedral (Sé do Porto)

Overlooking the banks of the Douro on the heights of the district of the Ribeira, the Sé, the Cathedral of Porto, is a 9-century-old church-fortress.

The complex architecture of the building, blending Romanesque, Gothic and Baroque styles, is the result of its long history.

The cloister of the cathedral is well worth a visit. The treasure room is home to a small collection of liturgical objects.

💡 Find out more 💡
To find out everything there is to know about this iconic attraction, head to the Captain’s full article dedicated to the Porto Cathedral.

The Casa do Infanta

A 2-minute walk from the Palacia da Bolsa, the Casa do Infante is an old customs house built in the 14th century. According to history, Henry the Navigator (also called the Infante Dom Henrique), Prince of Portugal, was born in this very house in 1394.

The Casa do Infante now houses a museum tracing the history of the building, and exhibits Roman remains discovered on site during archaeological excavations.

Entry to the Casa do Infante is included in the Porto Card (€2.20 per adult without Porto Card – free entry on Saturdays and Sundays).

In the heart of the Ribeira district, the São João National Theatre ( Teatro Nacional São João in Portuguese), in Praça da Batalha, is a beautiful theater hall built at the end of the 18th century and inspired by Italian theatres.

Exploring the Ribeira district by night

If the Ribeira district is magnificent during the day, it is perhaps even more beautiful at nightfall.

Captain Ulysse warmly recommends strolling on the Dom Luis I Bridge at sunset to admire the view of the banks of the Douro. The panorama is quite simply stunning!

Getting to the Ribeira district

The closest public transports are:

Accommodation in the Ribeira district

The Ribeira district is one of the nicest, but also one of the most expensive in Porto.

If you’re running on a tight budget, Captain Ulysses recommends moving away from the historic center to find a more affordable accommodation.

Otherwise, you will find here a selection of the best accommodation in the Ribeira district.

Food & drinks in the Ribeira district

To relax after a long day exploring Porto, nothing better than a drink by the Douro. To enjoy the view while sipping a good cocktail, Captain Ulysses warmly recommends the Cafe do cais.

⚓
Looking for tips to plan your vacation in Porto? You might find these articles of interest:
👉 A Guide to Porto: the best things to do
👉 Day-tours in the surroundings of Porto
👉 Visiting Porto with children
👉 Where to eat in Porto? The Captain’s restaurant recommendations
You can also find all of the Captain’s articles on Porto’s must-see sites and monuments here.

Looking for tips and recommendations? Here are all the Captain’s suggestions in Porto!