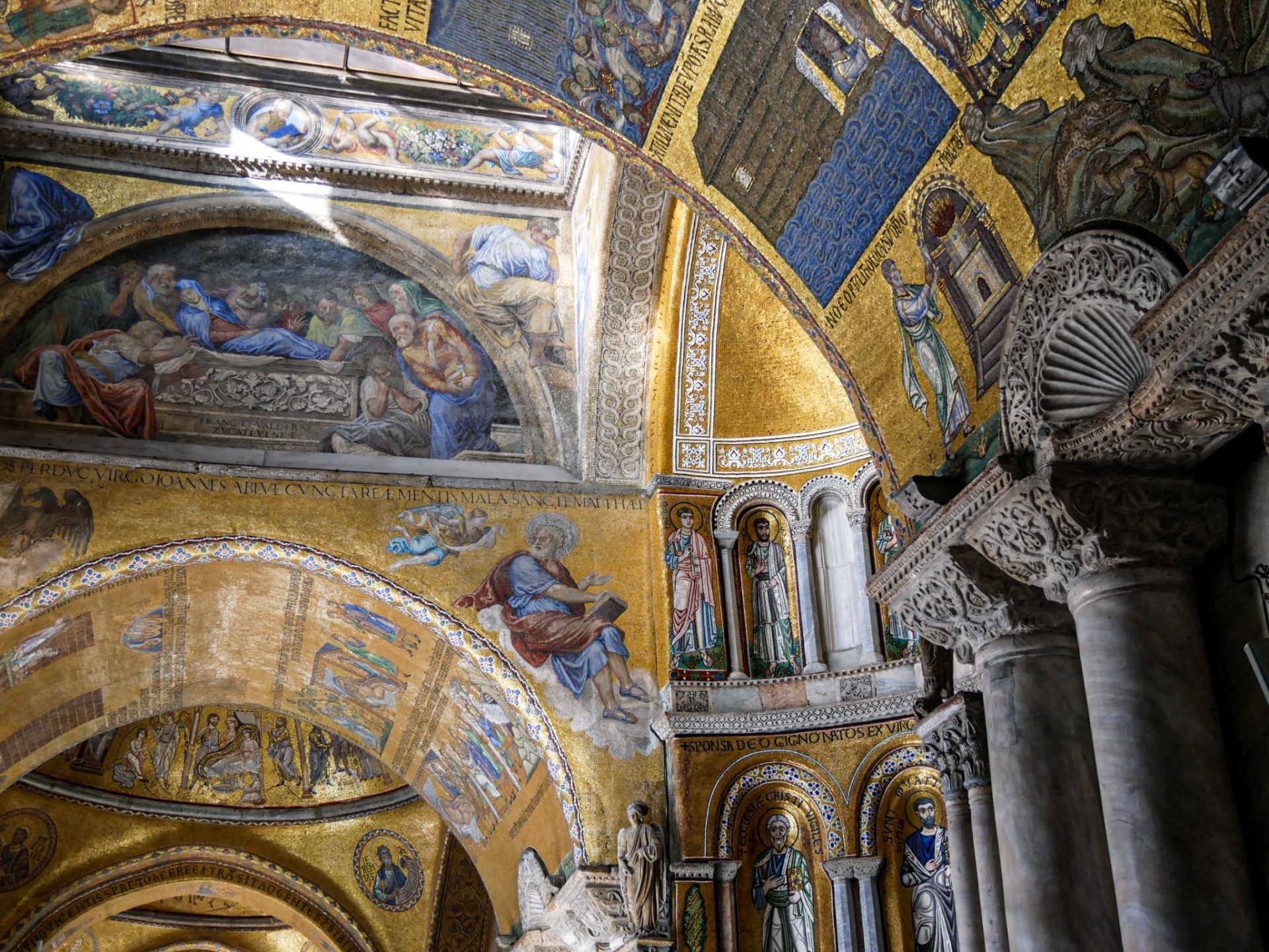 In the heart of Venice, the mythical St. Mark’s Basilica is a must-see for anyone visiting La Serenissima! Follow the guide! ⛪

💡 The Captain’s tip 💡
Want to know more about the history of Venice? Captain Ulysses highly recommends this free guided tour of the city (in English). It’s up to you to choose how much you want to tip the guide!

While might seem rather obvious that St. Mark is the holy patron of Venice, it wasn’t always the case.

Up until the 9th century, the ‘Serenissima’ was indeed under the protection of Saint Theodore.

But in 828, two Venetian merchants, Buono de Malamocco and Rustico de Torcello, stole the remains of St Mark from Alexandria and brought them to Venice, following the orders of Doge Giustiniano Participazio.

The Republic of Venice then abandoned St Theodore and made St Mark its holy patron.

In 832, the first church dedicated to St. Mark was built on the site of the chapel of the Doge’s Palace (also called Palazzo Ducale), but it was destroyed in a fire in 976, and rebuilt in 978. Unfortunately this second church was also short-lived.

The construction of St. Mark’s Basilica as we know it began in 1063.

Doge Domenico Contarini, who administered the city of Venice at the time, wanted the future basilica to symbolize Venetian strength, and drew inspiration from the basilicas of Constantinople, especially the Church of the Holy Apostles. The Doge is even said to have entrusted the construction of the basilica to Byzantine architects.

After many years of construction work, St Mark’s Basilica was consecrated in 1094. The basilica was embellished and transformed over the following centuries and collected countless riches and treasures – among which the horses of St. Mark adorning its sumptuous façade – brought back from the far reaches of the East.

The facade of the basilica is so intricate that it can be quite difficult to know where to look! Among the splendid ornaments that adorn the building, do not to miss:

Structure of the basilica

Like its Byzantine models, St. Mark’s Basilica is based on a Greek cross, with each arm surmounted by a dome. The central dome stands at the crossing of the four branches.

The interior of the basilica displays sumptuous golden mosaics, to which it owes its nickname of “Golden Basilica”.

Most mosaics date from the 13th century, – although some of them, especially on the façade, are more recent (16th – 18th centuries) -, and represent the history of Christianity.

Don’t forget to look down!

The marble floor of the basilica is a work of art in its own right! The pavement is a clever assemblage of marble and coloured stones forming various patterns, some of which even give the impression of being in relief.

Inside, the Basilica counts some 2600 ancient columns of different shapes and colors, made of marble, porphyry, jasper, serpentine or alabaster. 500 of them date back to the 3rd century AD.

These columns, which have an essentially decorative purpose, were brought back from Venetian wars and conquests, in Constantinople for the most part.

The high altar and the iconostasis

Be sure to take a look at the high altar, adorned with a canopy, and the iconostasis (which separates the nave from the sanctuary), surmounted with sculptures by Italian artist Dalle Masegne.

⚓Hear, hear, sailors! ⚓
Looking for more tips and suggestions for your trip to Venice ? Check out the Capitain’s article on the Best things to do in Venice!

It is adorned with 1927 gemstones and 80 Byzantine enamels depicting scenes from the Gospel and the lives of the Saints, arranged around the central figure of a Christ Pantocrator (a Christ in glory).

Designed in 976 by Byzantine artists, the Pala d’Oro was embellished over the following centuries before reaching its definitive shape in 1342.

If you want to have a look at the original Horses of St. Mark, head to St. Mark’s Museum (€5). The museum also exhibits fragments of mosaics which are over 7 centuries old.

The ticket to the museum also gives access to a gallery where you can have a closer look at the mosaics adorning the basilica, as well as a terrace offering panoramic views on St. Mark’s Square.

The Treasury of St. Mark’s Basilica (€3) exhibits a collection of liturgical objects, icons, ancient remains, relics and silverware, the majority of which was brought to Venice after the sack of Constantinople.

Getting to St. Mark’s Basilica

St. Mark’s Basilica is located in the very centre of Venice, on St. Mark’s Square, a stone’s throw from the Doge’s Palace and the Venetian lagoon.

The nearest vaporetto stations are San Zaccaria and San Marco, just a few hundred metres away.

The basilica is open:

Admission to St. Mark’s Basilica is free, but you’ll have to buy tickets to access the Pala d’Oro (2 euros), the museum (5 euros) and the treasury (3 euros).

Be warned: the city of Venice is very touristy and the queue to access St. Mark’s Basilica can be quite long. To avoid waiting too long, Captain Ulysses recommends:

When visiting the basilica, there’s a lot to see! If you don’t want to miss anything, Captain Ulysses suggests opting for:

Please note that proper dress is required to enter St. Mark’s Basilica. Make sure your shoulders and legs are covered (you can bring a scarf or a shawl if you are wearing shorts or a tank top).

Backpacks are not allowed inside the basilica. Free lockers are available at the Ateneo San Basso, in an alley located to the right of the basilica.

🛏️ Accommodation: Venice is a very touristy city and there is no shortage of accommodation, but they are generally rather expensive. If your budget is tight, Captain Ulysses suggests staying in Mestre, out of town. Accommodation is much more affordable and buses reach Venice very regularly.
As for mid-scale options, Captain Ulysses highly recommends Hotel Le Isole very well located a few steps from Saint Mark’s Square, this beautiful hotel has spacious and elegant rooms and offers… not to mention that breakfast is very good.
And if you’re looking for a more luxurious option in Venice, then Captain Ulysses most definitely recommends the Londra Palace nestled in a Venetian palace on the Riva degli Schiavoni.

🎟️ Activities: Tickets, guided tours, gondola tours, day-trips… There are plenty of things to do in Venice! But the city is often packed with tourists, which is why Captain Ulysses recommend that you book your activities online and opt for skip-the-line tickets. The Captain suggests having a look at GetYourGuide and Tiqets, which are online platforms specialised in selling tourist activities worldwide.

🎫 Citypass: If you’re planning on visiting all of Venice’s top sights, Captain Ulysses recommends you to opt for a Citypass, which will give you access to a selection of the city’s must-see sights and monuments. There’s a variety of city cards to choose from depending on what you’re looking for. Find out more here.

🚐 Transfers:To get to Venice from the airport, you’ll have three options: bus, vaporetto (orange Alilaguna Arancio line), or water taxi. It’s up to you to choose the option that works best for you! Be aware, however, that the historic centre is pedestrian, and buses and taxis are not allowed to operate there.

✈️ Flights: Venice is easily accessible by plane, train and bus. To book your plane tickets, Captain Ulysses recommends Skyscanner, which allows you to compare countless flights to find the best deal. If your dates are flexible, you can also compare prices over several months to find the cheapest flights possible. Overnight trains are also a great way to save time (and money) ! For more information, visit Omio.