Nestled in the district of Lipótváros, a ten minutes walk from the Parliament of Budapest, Saint Stephen’s Basilica (in Hungarian Szent István-bazilika) is the largest church in the capital and the 2 nd largest in Hungary after the Esztergom Basilica.

The origins of St. Stephen’s Basilica in Pest

In 1838, the Hungarian capital suffered terrible floods. To escape the rising waters, several hundred inhabitants took shelter at the top of the hill where the St. Stephen’s Basilica now stands.

A few years later, the local authorities decided to build a vast church dedicated to St. Stephen on the very spot where the lucky Budapesters narrowly escaped death!

The construction of St. Stephen’s Basilica

55 years and 3 architects were needed to complete the construction of St. Stephen’s Basilica in Budapest!

The inauguration of the basilica

Legend has it that the emperor spent the entire ceremony nervously staring at the dome for fear it might collapse again!

🤔 Who was Saint Stephen? 🤔
Stephen I st was the founder of the Kingdom of Hungary and became the first king of the nation in 1000 or 1001. He was canonized in 1083 for evangelizing his kingdom. He is therefore considered the patron saint of Hungary.

The exterior of St. Stephen’s Basilica

Before entering the basilica, take a moment to peer at its beautiful facade.
Its monumental dimensions are impressive: 87.4 meters (286 ft 8.9 in) long and 55 meters (180 ft 5.4 in) wide. Its dome, culminating at 96 meters (314 ft 11.5 in), makes it the tallest building in the capital together with the Hungarian Parliament, which is the exact same height!

The Basilica, which is the largest church in Budapest and the 2 nd largest in Hungary, can thus accommodate… up to 8,500 devotees!

The two towers flanking the building have six bells in total, the largest of which weighs 9 tons.

Although it blends neoclassical and neo-renaissance influences, the facade of the basilica remains incredibly harmonious.

The interior of St. Stephen’s Basilica

The time has come to push open the door of the basilica! The building’s layout is in the shape of greek cross. Inside, the decoration is lavish and ostentatious: marble, mosaics, stained glass, sculptures and gildings!

Some of themost famous Hungarian artists of the 19 and 20 th centuries took part in the decoration works including painters Mór Than, Bertalan Székely, Gyula Benczúr, Károly Lotz and sculptor Alajos Stróbl.

Panorama from the dome of St. Stephen’s Basilica

At the foot of the dome, you’ll find a panoramic terrace offering stunning views over the capital. To get to the terrace though, you’ll have to climb over 300 stairs… or simply hop in the elevator if you’re not in the mood for a bit of sport!

Getting to St. Stephen’s Basilica in Pest

To get to St. Stephen’s Basilica in Pest, head for the district of Lipótváros! The basilica is located a ten-minute walk from the Hungarian parliament , the Széchenyi Chain Bridge and the Opera House.

Hop-on hop-off sightseeing buses also stop near the basilica. They’re super handy to get around the city while enjoying the view!

The basilica is open: 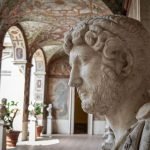 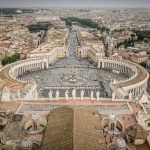 The Colosseum in Rome
5 min read