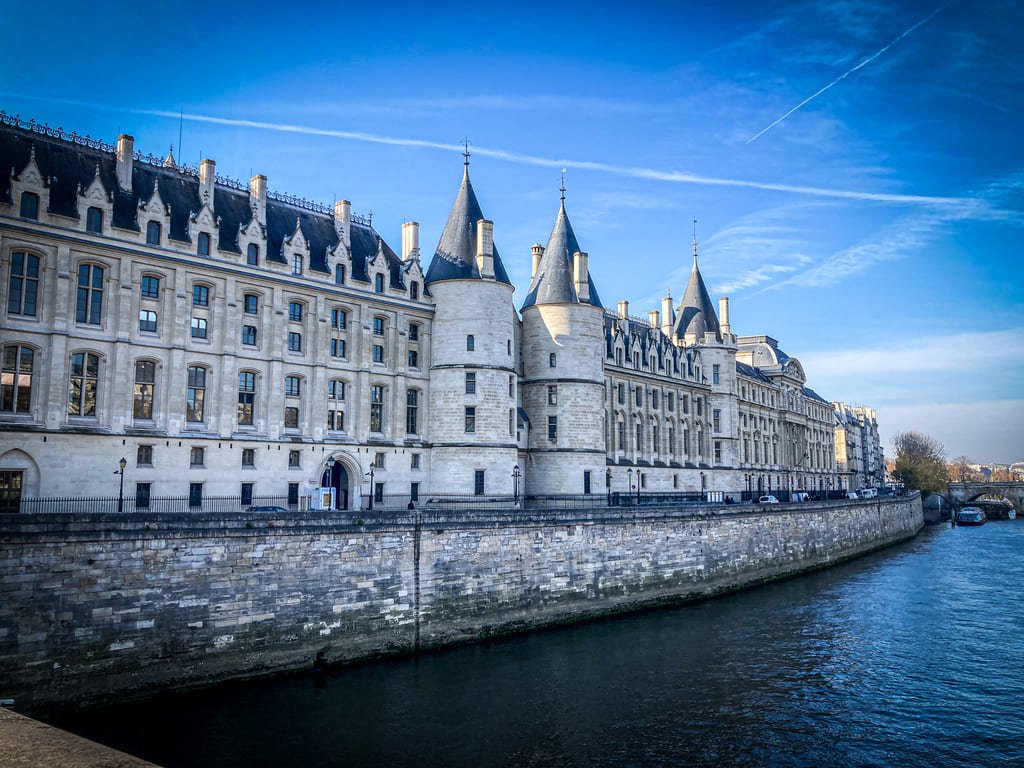 The Conciergerie in Paris

Nestled on the Île de la Cité, in the heart of the 1st arrondissement of Paris, the Conciergerie is a former royal palace turned prison. With its impressive gothic architecture and long history, it most definitely is worth a visit!

Brief history of the Conciergerie in Paris

The origins of the Conciergerie

While the Île de la Cité has been the Parisian residence of kings since the early Middle Ages, the palace as we know it today was built during the reign of Philip IV of France (aka Philippe Le Bel / in English Philip the Fair) between the 13th and 14th centuries.

Built in a resolutely Gothic style, this vast royal palace embodied the power and sovereignty of the kings of France.

In the late 14th century, Charles V and later his successors abandoned the Palais de la Cité to take up residence in the Louvre and Vincennes. However, the services of the royal administration remained on the Île de la Cité.

The Conciergerie, from royal palace to prison

In the late 14th century, part of the Conciergerie was converted into a prison to serve as an annex to the neighboring Châtelet prison.

Over time, the Conciergerie became a full-fledged state prison, as well as the nerve center of the judicial activity of the French capital.

The Conciergerie during the French Revolution

At the end of the 18th century, the Conciergerie became the symbol of all that was destructive and bloody about the French Revolution.

The Conciergerie was a detention facility, and from 1792 onwards it housed the Revolutionary Tribunal, where “enemies of the people” were brought to justice before those judged guilty were executed. Hence its sordid nickname of “antechamber of the guillotine”.

Many famous historical figures appeared before the Revolutionary Court and were incarcerated in the Conciergerie prisons, such as Marie-Antoinette, Charlotte Corday, Philippe d’Orléans, Antoine Lavoisier, and even Robespierre, who in 1794 went from accuser to accused.

In 1794-95, the French, fed up with the violent excesses of some revolutionaries, demanded an end to this bloody era known as the “the (Reign of) Terror”. The Revolutionary Court was abolished on May 31, 1795, three years after its creation.

The Conciergerie ceased to be a prison in 1914. Listed as a Unesco World Heritage Site, it is now a national monument open to the public, as is the neighboring Sainte-Chapelle.

Visiting the Conciergerie in Paris

The Conciergerie now invites visitors to dive into the long history of the French capital. While visiting the Conciergerie, Captain Ulysses recommends opting for the Histopad, a touch-screen tablet on which you’ll be able to discover a reconstruction of the Palace by means of augmented reality.

The exterior of the Conciergerie

Before entering the Conciergerie, take some time to admire the impressive gothic building from the outside.

The Clock Tower, visible from the Boulevard du Palais, is undeniably an architectural gem. To enjoy a panoramic view of the Conciergerie, Captain Ulysses recommends crossing the Seine on the Pont au Change.

Built during the reign of Philippe Le Bel (1268-1314), the Salle des Gens d’Armes is a stunning vaulted room whose gothic architecture is sure to delight art and history lovers. It regularly hosts temporary art installations.

Built around the same time, the Salle des Gardes housed at the end of the 18th century the infamous Revolutionary Court.

Overlooking the Salle des Gens d’Armes, the medieval kitchens were built during the reign of Jean Le Bon (1350-1364).

Spread out between the first floor and the 2nd floor, the revolutionary rooms retrace through exhibitions and historical reconstructions the role played by the Conciergerie during the French Revolution.

Terror, Revolutionary Court and Dictature du Salut Public (=Dictatorship of Public Safety) will no longer hold any secrets for you.

The prisoners’ chapel is located on the former site of the king’s oratory. During the Revolution, the chapel was transformed into a collective prison.

The expiatory chapel of Marie-Antoinette

Built during the Restoration – the period of French history during which the House of Bourbon returned to power – on the initiative of King Louis XVI, the expiatory chapel of Marie-Antoinette pays tribute to the fallen queen.

The court of women

This inner courtyard was once used as an outdoor space where women prisoners could go for a walk in the Conciergerie.

Getting to the Conciergerie

The Conciergerie is nestled on the Île de la Cité, within the precincts of the Palais de la Cité, a stone’s throw from the Sainte-Chapelle, the Marché aux fleurs and Notre-Dame-de-Paris.

The nearest metro station is Cité, on metro line 4 (if you’re not in great physical shape, take the elevator to get back to the surface!)

The Saint-Michel station (line 4 and RER C, connected to the Cluny – La Sorbonne station where you will find line 10 and the RER B) is also located a few steps from the Conciergerie. You can also stop at the Châtelet station (lines 1, 4, 7, 11 and 14).

The Conciergerie is closed on May 1st and December 25th.

Be warned, the Conciergerie and the Sainte-Chapelle are victims of their own success. To avoid wasting precious time in line, Captain Ulysses strongly recommends that you book your tickets online in advance: