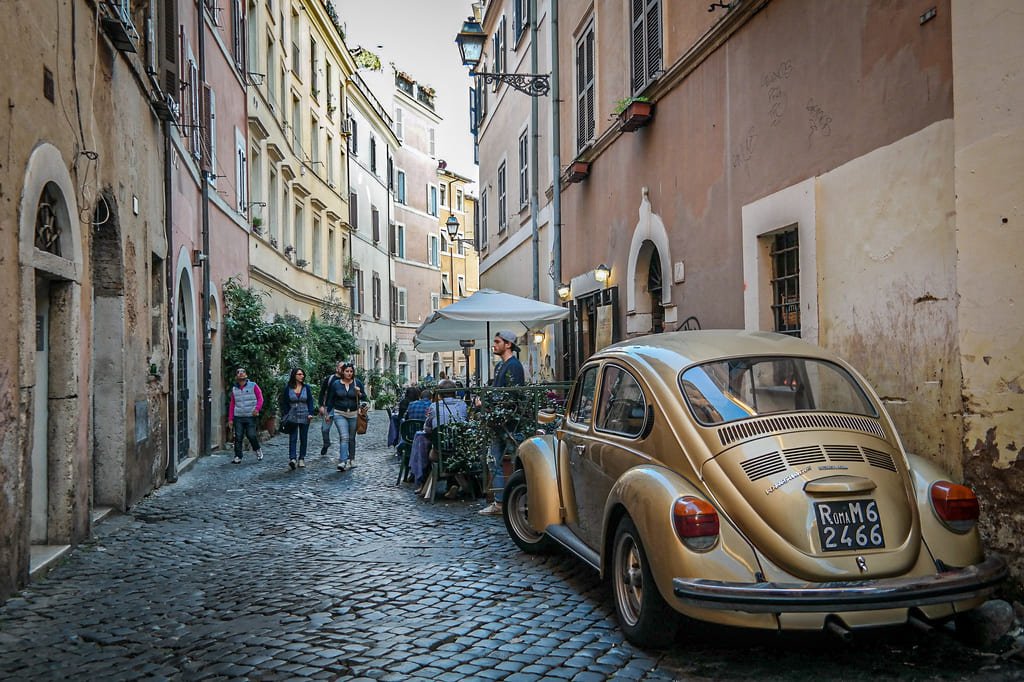 Nestled on the west bank of the Tiber, Trastevere is one of Captain Ulysses’ favourites in Rome.

Trastevere in a few words

To explore Trastevere, head to the west bank of the Tiber, south of the Vatican.

The district’s name is derived from the Latin Transtiberim: “beyond the Tiber”, due to its geographical position.

Trastevere is quite an ancient district: under the Emperor Augustus (1st In fact, as early as the 3rd century B.C., it was one of the 14 “regions” (or districts) of the ancient city of Rome. It was also included in the enclosure of the Aurelian Wall, built to protect the city in the 3rd century BC.nd century AD.

Later, some of the oldest churches in Rome were built in Trastevere. Many of the district’s narrow streets and colourful squares date back to the Middle Ages.

Popular and multicultural since its origins – it has been inhabited since ancient times by Jewish and Syrian communities – Trastevere is a district that has managed to preserve a culture of its own, of which its inhabitants – the Trasteverini – are very proud!

But Trastevere has become quite touristy and has tended to become gentrified in recent years, particularly around the Piazza Santa Maria in Trastevere. The alleys surrounding the Basilica of Santa Cecilia in Trastevere remain more authentic and peaceful.

Of all the Roman districts, Trastevere is without doubt the most suitable for strolling! Don’t hesitate to put away your map/GPS and get lost in the district’s picturesque alleys.

That being said, be sure to check your map from time to time to make sure you you’re not missing out on the must-see monuments in Trastevere!

Want to learn more about the rich history of Trastevere? Captain Ulysses recommends this guided tour of the district.

And for the gourmets and food lovers, the Captain highly recommends this food tour during which you’ll discover the culinary wonders of Trastevere.

Don’t miss the beautiful fountain either: it is one of the oldest in Rome! It owes its current appearance to the architect Carlo Fontana, who restored it in the 17th century.

The Palazzo San Callisto (St. Calixtus), located next to the basilica and built in the 17th century, is also worth a visit.

You’ll find countless bars, shops and restaurants – which are as popular with visitors as they are with locals – in the square and the adjacent streets.

Basilica of Santa Maria in Trastevere

The Basilica of Santa Maria del Trastevere is undoubtedly the jewel of the district!

Built in the 3rd century AD during the pontificate of Pope Calixtus I, the basilica is believed to be the first Christian place of worship officially open to the public.

It was restored many times over the following centuries, particularly in the 12th century, when the basilica was decorated with the mosaics for which it is still famous today. The Ionic and Corinthian columns were added at the same time and come from the Baths of Caracalla.

The coffered ceiling, the cosmastic pavement and the Avila chapel are also worth seeing.

Basilica of Santa Cecilia in Trastevere

Built in the 5th century, the Basilica of Santa Cecilia del Trastevere is the other emblematic basilica of the area. According to legend, it was built on the exact site of the house of Saint Cecilia, who was beheaded for refusing to renounce Catholicism.

After being buried in the Catacombs of St. Calixtus on the Via Appia Antica, the remains of the saint were transferred to the basilica in 820.

The architectural style of the church is very heterogeneous and bears witness to the many changes it has undergone over the centuries.

Don’t miss the magnificent garden-courtyard in front of the church. The cosmastic pavement, the gothic baldachin and the statue of St. Cecilia by Stefano Maderno are also worth seeing, not to mention of course the famous fresco of the Last Judgement painted by Petro Cavallini in the 13th century.

Nestled along the Tiber, the Villa Farnesina is a sumptuous Renaissance palace whose walls are covered with frescoes painted by Italian masters (Raphael, Baldassare Peruzzi, Giovanni Antonio Bazzi, known as the Sodoma).

Built between 1505 and 1511, it is the work of the architect Baldassare Peruzzi.

The Villa Farnesina is a stopover that will undoubtedly delight art and history lovers!

Overlooking the narrow streets of Trastevere, the Janiculum – named after the Latin god Janus – is a hill offering a breathtaking view of the Italian capital.

Considered the 8th hill of Rome – in reference to the 7 historical hills of the capital, among which the most famous is undoubtedlythe Palatine – it marks the limit between Rome and Vatican City, to the north.

The Janiculum is associated with the history of General Giuseppe Garibaldi (and his wife Anita Garibaldi), whose statues you’ll find at the top of the hill. Why? Well, because General Garibaldi succeeded in 1849 (during the First Italian War of Independence) in holding out on the hill for several weeks against the numerically superior French army (the general and his fighters were eventually routed).

The path to the top of the Janiculum is a bit steep. It is therefore best to avoid it if you are not physically fit or have heart problems.

Perched on the slopes of the Janiculum, the Orto Botanico di Roma (Botanical Garden of Rome) is located in the former park of Villa Corsini.

Covering 12 hectares, the garden is home to more than 3,000 species of plants.

Although the visit is not a must, it should definitely delight botany lovers.

Every Sunday morning, Trastevere hosts the largest flea market in Rome until 2pm. It’s a great opportunity to discover another side of the Italian capital and to slip into the everyday life of the Romans for a moment.

The flea market sells a bit everything: furniture, antiques, art objects, but also counterfeits and clothes made in China.

To explore the Trastevere Flea Market, head to the south of the district, near Porta Portese.

‘s no secret that Trastevere is heaven on earth for food lovers! In the evening, the gourmets (Romans and tourists alike) meet here for a good glass of wine and a platter of local cold cuts!

Restaurants, bars, trattorias… you’ll find everything you need in the area to treat yourself to a nice dinner!

The district of Trastevere is located on the west bank of the Tiber, south of the Vatican. The bad news is that this little corner of Rome is not accessible by metro… so you’ll have to walk, or take the bus or tram!

Please note that unlimited access to public transport is included in the Roma Pass and Omnia Card. Find out more here.