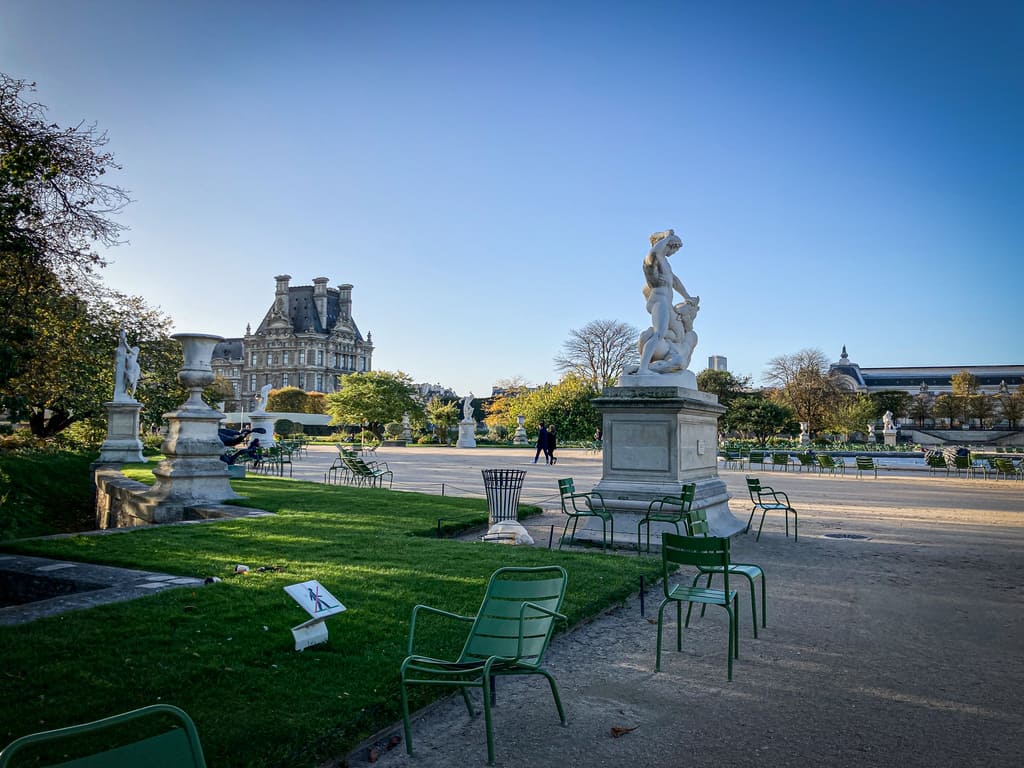 The Tuileries Garden in Paris

Looking for a refreshing break after walking around the French capital? Head for the Tuileries Garden!

Located in the heart of the 1st arrondissement of Paris, it is the largest and oldest French garden in Paris, a.k.a. the City of Light.

The Tuileries Garden in a few words

Heading to the heart of the 1st arrondissement of Paris

The Tuileries Garden is located in the center of Paris, a stone’s throw from the Place Vendôme, the Musée d’Orsay and the Musée des arts décoratifs.

The Tuileries Garden is bordered:

This small oasis of greenery is part of the Unesco World Heritage site of the banks of the Seine. The Tuileries Garden is also classified as a historical monument.

tBrief history of the Tuileries Garden

The origins of the Tuileries Garden

At the beginning of the 16th century, François I had thought of building a palace on the vast grounds occupied by tile factories (tuileries) since the 12th century, but it was only a few decades later that Catherine de Médicis moved foward with the project.

From 1564 onwards, the queen mother oversaw the construction of a vast palace – the Palais des Tuileries – which included an Italian garden with a grotto and a menagerie.

The Tuileries Garden under Louis XIV

A century after its construction, Louis XIV and Colbert – one of the king’s main ministers – had the garden completely redesigned and transformed into a French garden. This heavy task was entrusted to none other than André Le Nôtre, the king’s famous gardener, famous for designing the gardens of Versailles, Vaux-le-Vicomte and Chantilly.

Although Colbert originally intended to limit access to the garden to the royal family, the writer Charles Perrault convinced him to open it to all Parisians.

The Tuileries garden has thus been accessible to all from the end of the 17th century. The garden now houses restaurants and cafes. Strollers can also lounge on the many chairs and loungers scattered throughout the Tuileries.

🌹 Italian style gardens and French style gardens 🌹
Italian gardens appeared in the region of Florence during the Renaissance. Strictly ordered, they are set on sloping grounds and are lined with statues, water features and decorative elements.
Popularized by André Le Nôtre, French gardens were inspired by Italian gardens, but are distinguished from them by their more symmetrical and geometric layout. Unlike their model, they are set on flat grounds. They represent the triumph of order disorder and of culture over nature.

The Tuileries Garden in the 19th century

In the 19th century, Napoleon III – nephew of Napoleon I and emperor from 1852 to 1870 – ordered the construction of:

In 1871, the Tuileries Palace was destroyed in a fire during the Paris Commune, before being razed in 1883. There remains no trace of the palace today.

Nowadays, the Tuileries Garden is a favourite’s of Parisians and visitors alike.

At the end of the 1990s and again in 2016, modern and contemporary sculptures were erected in the garden, alongside the classical sculptures already on display.

Twice a year, during Fashion Week, the Tuileries Garden hosts fashion shows in large tents set up for the occasion.

Strolling around the Tuileries garden

The garden is flanked on either side by two vast terraces designed by André Le Nôtre: the Terrasse du bord de l’eau along the quays of the Seine and the Terrasse des feuillants along the rue de Rivoli.

While the Tuileries Garden is pleasant all year round, it is particularly delightful during in spring and summer, when it is covered with fragrant flowers.

The statues of the Tuileries Garden

In the purest tradition of French gardens, the Tuileries Garden are dotted with statues of all kinds, some classical, others resolutely contemporary.

You will find contemporary sculptures to the east of the gardens, including works by iconic artists such as Rodin, Roy Lichtenstein, Alberto Giacometti, Max Ernst, Henry Moore and Jean Dubuffet.

The museums of the Tuileries Garden

You will find in the Tuileries Garden two of Captain Ulysses’ favorite museums in Paris:

That said, be warned, the area is posh and touristy: not the best value for money.

Every year, in July and August, the Jardin des Tuileries gets into the summer spirit with the Tuileries Festival.

Getting to the Tuileries Garden

The Jardin des Tuileries is located in the heart of the1st arrondissement of Paris, a stone’s throw from some of the capital’s most emblematic monuments: the Louvre Museum, the Place Vendôme, the Museum of Decorative Arts and the Musée d’Orsay.

As for public transportation, the Jardin des Tuileries is easily accessible from the Concorde (lines 1, 8 and 12) and Tuileries (line 1) stations.

Opening hours of the Tuileries Garden

The Tuileries Garden is open every day. The opening hours vary according to the season:

Access to the Tuileries Garden is free. All the more reason to stop by!