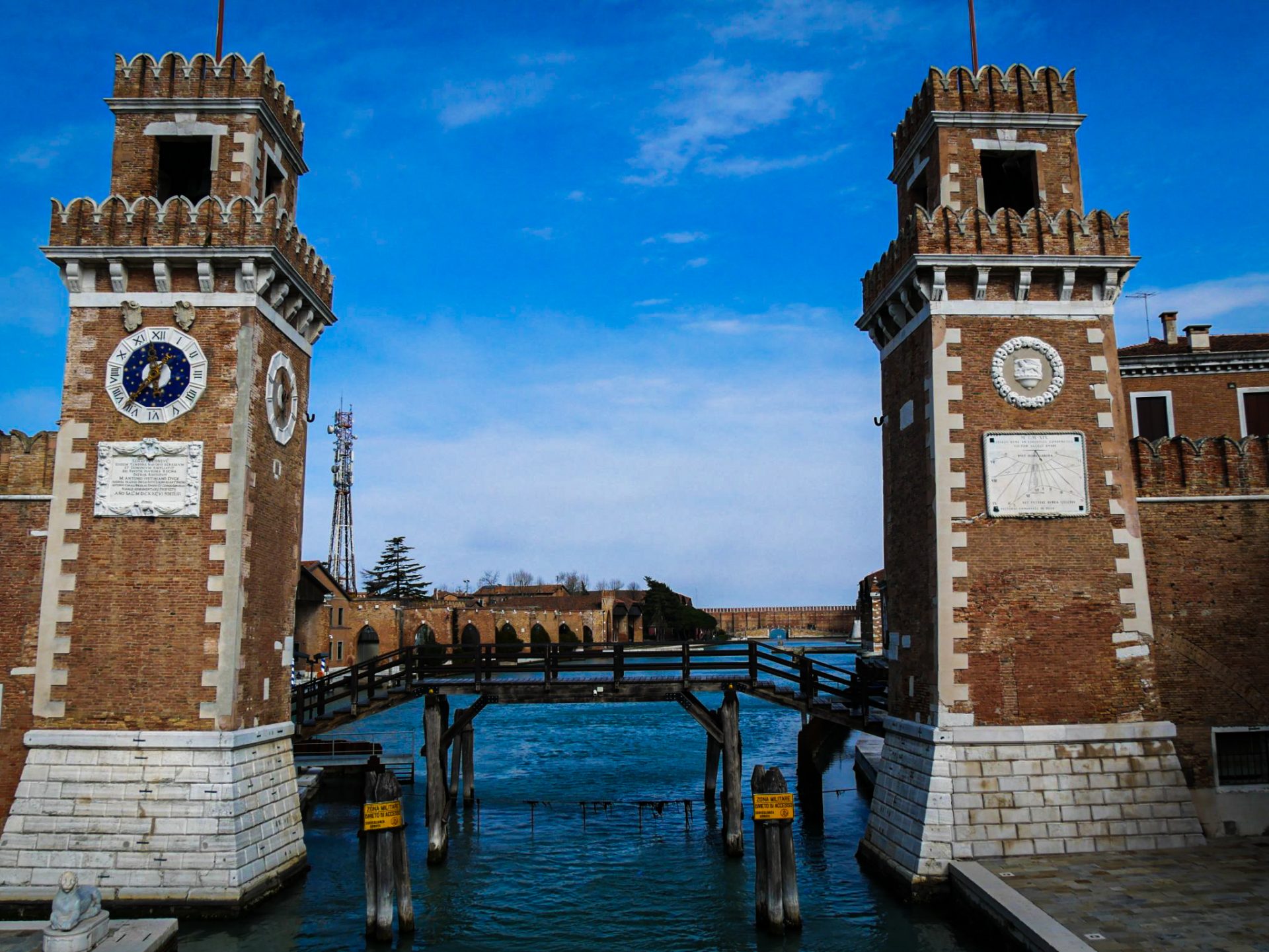 Nestled in the district of Castello, the Venetian Arsenal is one of Venice’s most iconic monuments. However, the interior of this huge complex remains inaccessible to the public and visitors can only admire it from the outside!

Want to know more about the history of Venice? Captain Ulysses highly recommends this free guided tour of the city. It’s up to you to choose how much you wish to tip the tour guide!

Looking for a hotel in Venice? Be sure to check out the Captain’s article: Where to stay in Venice? Advice & recommendations

Pou planning your trip to Venice? Be sure to check out Captain Ulysses’ complete article on what to see and do in the city: a Guide to Venice

The term “arsenal” derives from the Arabic “Dar-al sina” which means “workshop.”

Brief history of the Venetian Arsenal

The origins of the Venetian Arsenal

In 1104, Doge Ordelafo Faliero decided that Venice needed a shipyard to reinforce the city’s sea power and created the Venetian Arsenal.

Over the following centuries, the complex was expanded multiple times. It now spans an area of 332,000 square metres, covering 15% of Venice!

The Venetian Arsenal in the 14th and 15th centuries

In the 14th and 15th centuries, the Arsenal played a key role in making the Republic of Venice a major military and trading power.

The shipyard’s prosperity was based on a complex system invented by the Venetian state to finance the city’s fleet:

Building on its economic and military success, the Venetian Arsenal turned to innovations and designed new ships like the galleon.

Assembly lines at the Venetian Arsenal

At its peak, the Venice Arsenal employed 16,000 workers and developed a working system that was strikingly similar to what would later be called ‘assembly lines’. To save time and efficiency, tasks were divided and standardised.

In the 17th century, the Venetian Arsenal could build one boat per day which was truly remarkable!

The Venetian Arsenal in the hands of the French and Austrians

In 1797, the Republic of Venice was conquered by Napoleon Bonaparte.

Over the next 70 years, Venice fell in turn in the hands of the French and the Austrians, who plundered the Arsenal before carrying out major renovation works.

In 1866, the Italian military navy regained possession of the shipyard.

Today, the Venice Arsenal remains the property of the Italian Navy, although parts of the complex now belong to the city of Venice. Since 1999, the Arsenal opens its doors to the public during the Biennial.

Even though visitors cannot enter the Venetian Arsenal, it would be a pity not to have a look at this iconic monument during your trip to Venice. This huge shipyard is indeed most definitely worth a short detour!

The Arsenal is located in the district of Castello.

built in 1460. Designed by Venetian Architect Antonio Gambello in the shape of a triumphal arch, the Arsenal’s main gate is considered the oldest example of Renaissance architecture in Venice.

The winged lion statue surmounting the arch of the door, which is attributed to the artist Bartolomeo Bon, is an allusion to St. Mark, holy patron of Venice.

The railing is adorned with statues of ancient deities.

On both sides of the central arch, two winged statues were added in 1571 following the victory of the Venetian fleet against Turkish forces in Lepanto. The statue of Saint Justina was added on top of the door in 1578.

The door is also flanked by four marble lion statues which were stolen in Greece and brought back to Venice. 1683.

The Venetian Arsenal also has an entrance dedicated to boats, which can reach the complex by sailing up the Arsenal Canal (Rio dell’Arsenale in Italian).

The navigable entrance, located right next to the main gate, is flanked by two square towers dating from 1686.

A stone’s throw form the Venetian Arsenal, the Museo Storico Navale (Naval History Museum) is an interesting addition to the Arsenal’s visit.

It will particularly delight sailing enthusiasts, who will be able to discover the history of the Venetian navy, as well as a collection ship models of all kinds.

The entrance ticket to the Museo Storico Navale also includes access to the Ship Pavilion where you can admire authentic Venetian boats.

Exploring the surroundings of the Venetian Arsenal

A detour to the Venetian Arsenal is the perfect opportunity to explore the district of Castello, which is unanimously regarded as the most authentic sestiere in Venice.

Castello shows a different side of Venice, less lavish and touristy but more genuine.

When in Castello, be sure to check out:

If you don’t want to miss out on any of the top sights in Castello, you can also opt for a guided tour of the district. Captain Ulysses recommends this one in particular, which is available in English, French and Italian: guided tour in the district of Castello .

The Venetian Arsenal is located in the heart of Castello, a ten-minute walk from St. Mark’s Square.

The nearest vaporetto station is Arsenale (easy to remember!)

🛏️ Accommodation: Venice is a very touristy city and there is no shortage of accommodation, but they are generally rather expensive. If your budget is tight, Captain Ulysses suggests staying in Mestre,out of town. Accommodation is much more affordable and buses reach Venice very regularly.
As for mid-range options, Captain Ulysses highly recommends Hotel Le Isole. This hotel is very very well located a few steps from Saint Mark’s Square and the rooms are spacious and elegant… not to mention that breakfast is very good.
And if you’re looking for a more luxurious option in Venice, then Captain Ulysses most definitely recommends the Londra Palace nestled in a Venetian palace on the Riva degli Schiavoni.

🎟️ Activities: Tickets, guided tours, gondola tours, day-trips… There are plenty of things to do in Venice! But the city is often packed with tourists, which is why Captain Ulysses recommend that you book your activities online and opt for skip-the-line tickets. The Captain suggests having a look at GetYourGuide, Musement and Tiqets, which are online platforms specialised in selling tourist activities worldwide.

🎫 Citypass: If you’re planning on visiting all of Venice’s top sights, Captain Ulysses recommends you to opt for a Citypass, which will give you access to a selection of the city’s must-see sights and monuments. There’s a variety of citypasses to choose from depending on what you’re looking for. Find out more here.

🚐 Transfers:to get to Venice from the airport, you’ll have three options: bus, vaporetto (orange Alilaguna Arancio line), or water taxi. It’s up to you to choose the option that works best for you! Be aware, however, that the historic centre is pedestrian, and buses and taxis are not allowed to operate there.

✈️ Flights: Venice is a city easily accessible by plane, train and bus. To book your plane tickets, Captain Ulysses recommends Skyscanner, which allows you to compare countless flights to find the best deal. If your dates are flexible, you can also compare prices over several months to find the cheapest flights possible. Overnight trains are also a great way to save time (and money) ! For more information, visit Trainline.com.