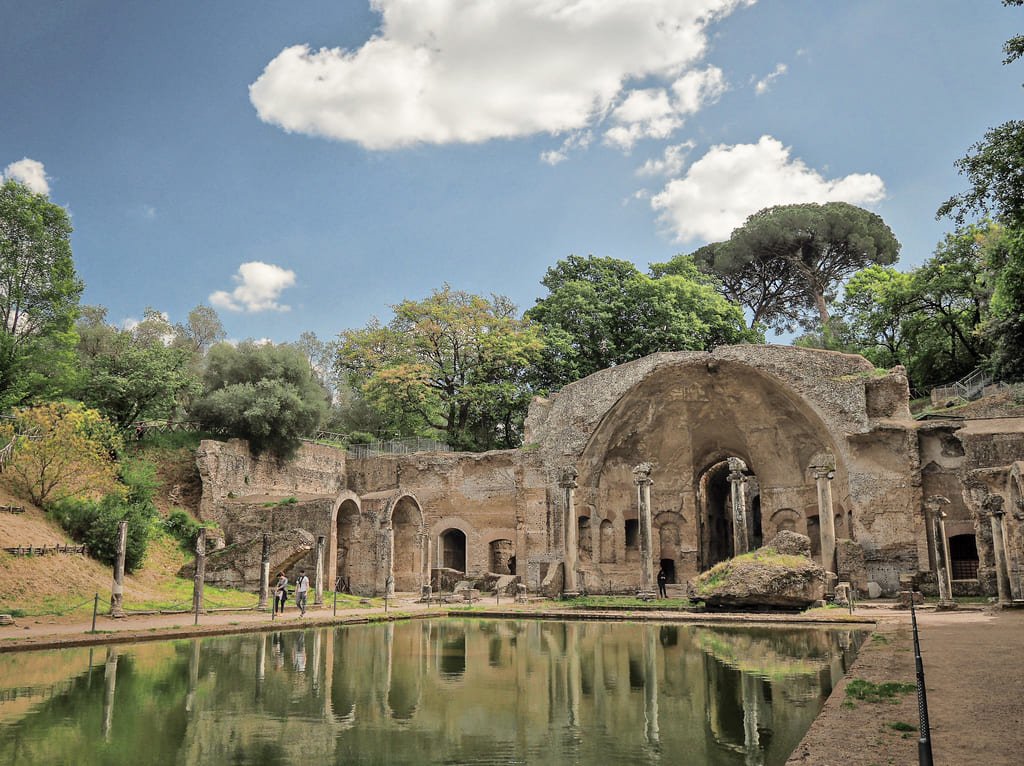 Hadrian’s Villa in Tivoli near Rome

Listed as a UNESCO World Heritage Site, Hadrian’s Villa ( Villa Adriana in Italian / Villa Hadriana in Latin) is a vast complex built in the 2nd century AD at the request of Emperor Hadrian.

Wonderfully well-preserved, Hadrian’s Villa is by far one of the most impressive ancient sites in Italy: a must-see for any visitor exploring Rome and its surroundings!

In the 2nd century AD, Emperor Hadrian forsook Rome and the Palatine Hill to build an immense imperial complex some thirty kilometers from the capital, in Tivoli (Tibur in Latin), on the slopes of the Tiburtine Mountains.

The choice of this location was no coincidence: supplied with water by 4 aqueducts, the site was until then occupied by a villa belonging to the emperor’s wife (Sabina) and was located near quarries of tuff, pozzolana and travertine.

Emperor Hadrian himself was actively involved in drawing up the plans for his vast complex and drew inspiration from the monuments that he discovered during his travels to the far reaches of the Roman Empire. The buildings of Villa Adriana therefore reflect the architectural traditions of ancient Rome, ancient Greece and ancient Egypt.

Construction work on Hadrian’s Villa began in 117 AD and ended in 138 AD (on the year of the Emperor’s death).

If Hadrian’s Villa seems at first sight to be built entirely in the open air, an immense system of galleries was actually hidden underground. They made it possible to supply the whole of the complex… but also served, it seems, as a parking lot to “store” the chariots!

Archaeologists estimate that Hadrian’s Villa could accommodate up to 3000 people: the Emperor and his court, philosophers and scholars under the protection of the Emperor, soldiers of the Praetorian Guard as well as countless servants!

When Emperor Hadrian died, his villa continued to attract Roman nobles. But the site gradually fell into oblivion after the fall of the Western Roman Empire.

👑 Who was Emperor Hadrian? 👑

Emperor Hadrian was born in 76 AD, near present-day Sevilla, and died in 138 AD in Italy. He reigned over ancient Rome from 117 to 138. Hadrian was a poet and a philosopher. Historians consider him a learned and peaceful emperor who dedicated his reign to the appeasement of conflicts in the Roman Empire.

Hadrian’s Villa in the Middle Ages

In the Middle Ages, Hadrian’s Villa became a distant memory and the site was abandoned for over 10 centuries.

Hadrian’s Villa since the Renaissance

Hadrian’s Villa was rediscovered by the historian and humanist archaeologist Flavio Biondo during the Renaissance.

The ancient complex then became a place of pilgrimage for artists who came here to seek inspiration (among whom the architect Francesco Borromini, who worked on the redesign of the Basilica of Saint John Lateran and on the construction of Palazzo Barberini).

In 1870, Hadrian’s Villa became the property of the Italian State, which launched major archaeological excavation programs.

The Villa Adriana was listed as a UNESCO World Heritage Site in 1999.

Today, only a small portion of the villa (about 1/3) has been excavated: archaeologists still have some 80 hectares of ancient ruins to explore!

Hadrian’s Villa is located in Tivoli, as is the magnificent Villa d’Este, famous worldwide for its stunning gardens. Most visitors therefore decide to combine the visit of both sites on a day-tour to Tivoli.

A word of advice: put on comfy shoes! While only a minority of the Villa Adriana is open to the public today, it still represents almost 40 hectares (out of 120 hectares in total)!

The portion of Hadrian’s Villa which is open to the public comprises a good few monuments, including baths, pleasure gardens and buildings of all kinds. There is plenty to discover.

In order not to get lost and miss out on the site’s most emblematic buildings, Captain Ulysses warmly recommends that you opt for the audioguide (available in several languages | €5).

You will also find a small museum on site where the statues found on site and spared by the many looters who robbed Hadrian’s Villa over the centuries are exhibited.

Admission to Hadrian’s Villa is €10 full price, €5 for young EU nationals aged 18-25. Entry is free for visitors under 18 years old.

Getting to Hadrian’s Villa

Hadrian’s Villa is located on the outskirts of the city of Tivoli, some thirty kilometers from Rome.

Visitors have several options to get to the Villa:

Note: the CAT4 bus line goes to Villa Este (in the center of Tivoli) from Hadrian’s Villa. To return to Rome, you can then take the Cortal bus a few steps from the Villa d’Este.

If you want to get to Tivoli on your own, the Captain recommends taking the bus rather than the train (Tivoli station is not located in the city centre).