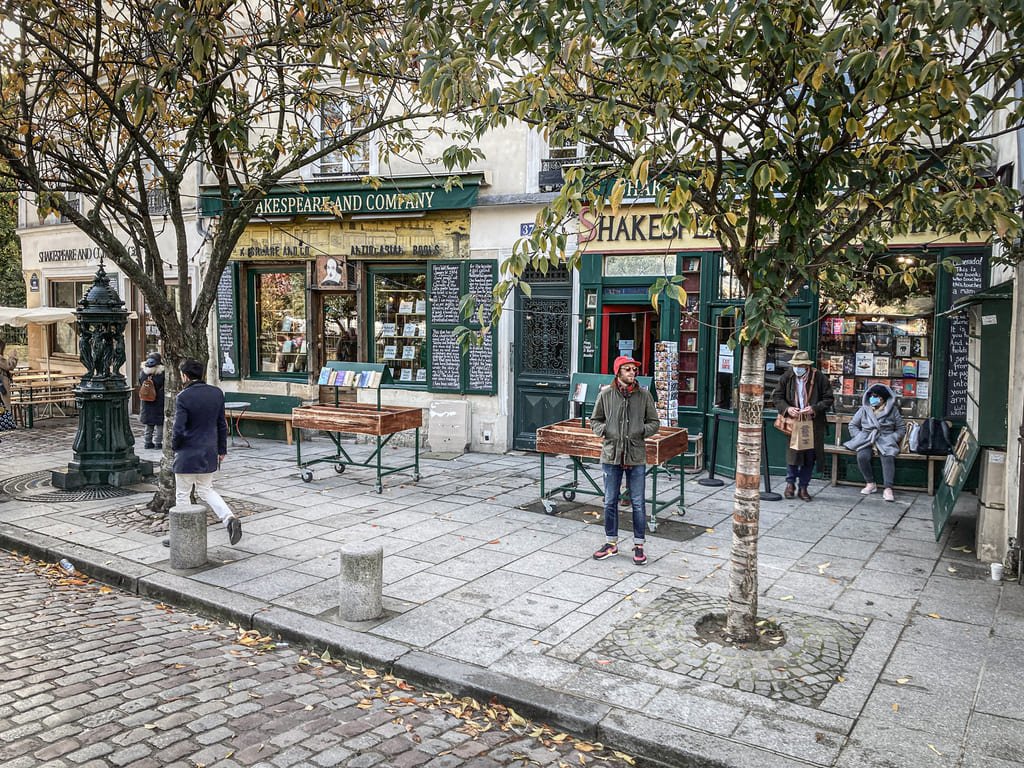 Shakespeare and Company in Paris

Head for the heart of the 5th arrondissement! Just a stone’s throw from Notre-Dame-de-Paris, the English-speaking bookshop Shakespeare and Company truly is heaven-on-earth for book lovers… It’s also a great point of interest for visitors curious to discover a different side of Paris!

The origins of Shakespeare and Company

In 1919, Sylvia Beach, an American bookseller and publisher, founded the first English-language bookstore, Shakespeare and Company, at 8 rue Dpuytren, in the heart of the 6th arrondissement.

Two years later, the bookshop moved to 12 rue de l’Odéon, where it welcomed some of the most emblematic writers of its time.

In 1922, Sylvia Beach published the first edition of James Joyce’s classic Ulysses: a proof of courage and audacity considering the novel was to be banned in England and the United States.

In 1941, the German occupation forced Shakespeare and Company to close its doors for good.

The end of a chapter…

In 1951, George Whitman, an American bookseller, opened an English-language bookstore at 37 rue de la Bûcherie, in the heart of the 5th arrondissement of Paris, a stone’s throw from the Latin Quarter.

Named Le Mistral, this bookstore was located opposite Notre-Dame-de-Paris, at kilometer zero, the point at which all French roads begin.

Sylvia Beach, a devotee of George Whitman’s bookstore, invited the owner to take over the name ‘Shakespeare and Company’… and so he did in 1964, on the occasion of the 400th anniversary of William Shakespeare’s birth!

Just like the members of the Lost Generation in Sylvia Beach’s bookstore, the writers of the Beat Generation – among whom Allen Ginsberg, Gregory Corso and William S. Burroughs – became regular visitors in George Whitman’s bookshop. Jim Morrison was also known to drop by Shakespeare and Company regularly.

📚 The Tumbleweeds 📚
George Whitman was a socialist. He wanted to make his bookstore a forum for exchanging views and meeting like-minded individuals, where the door would always be open to authors in need. He therefore invited writers, artists and intellectuals to spend the night on the second floor of the bookstore, surrounded by books. What did he ask in exchange? Simply that they read a book a day, help put the books away for a few hours a day, and write a short one-page autobiography before leaving.

In 2001, Sylvia Whitman took over the family bookstore, assisted by her husband David Delannet. George’s daughter continues to perpetuate the spirit of openness and sharing so dear to her father.

In 2003, she created the Festival and Co, a literary festival organized every two years in the small square in front of the bookshop.

In 2011, Sylvia Whitman launched the Paris Literary Prize, a literary competition for international young writers who have not yet been published.

In 2015, the Shakespeare and Company Café opened in the building adjacent to the bookstore. It’s the perfect spot to enjoy a delicious moment of relaxation after a shopping session in the bookstore.

While Shakespeare and Company truly is heaven on earth for all book lovers, no need to be an avid reader to enjoy a visit in the mythical bookshop.

The English-languague bookstore has become quite the cultural Mecca in the French capital. Frequented by Parisians as well as visitors from all over the world, Shakespeare & Co. is a cosmopolitan and lively gathering point. Captain Ulysses can only recommend taking time to explore the shelves covered with books of all kinds, and lounge in one of the store’s many cozy armchairs.

The bookstore also organizes numerous meetings (in English) with emblematic or more confidential authors. Find the program of the next events here.

Before leaving, Captain Ulysses recommends stopping in the café next door for a nice cup of coffee!

Getting to Shakespeare & Co.

The Shakespeare and Company bookstore is located at number 37 rue de la Bûcherie in the 5th arrondissement, opposite Notre-Dame and a few steps from Saint-Michel, the Sainte-Chapelle, the Conciergerie and the Marché aux fleurs.

The nearest metro station is Cité, on metro line 4 (if you’re not in great physical shape, take the elevator to get back to the surface!) The RER B and C trains also stop at the Saint-Michel – Notre-Dame station.

Opening hours of the bookshop

Access to Shakespeare & Company is free (unlike some other iconic bookstores, such as the Lello Bookstore in Porto).