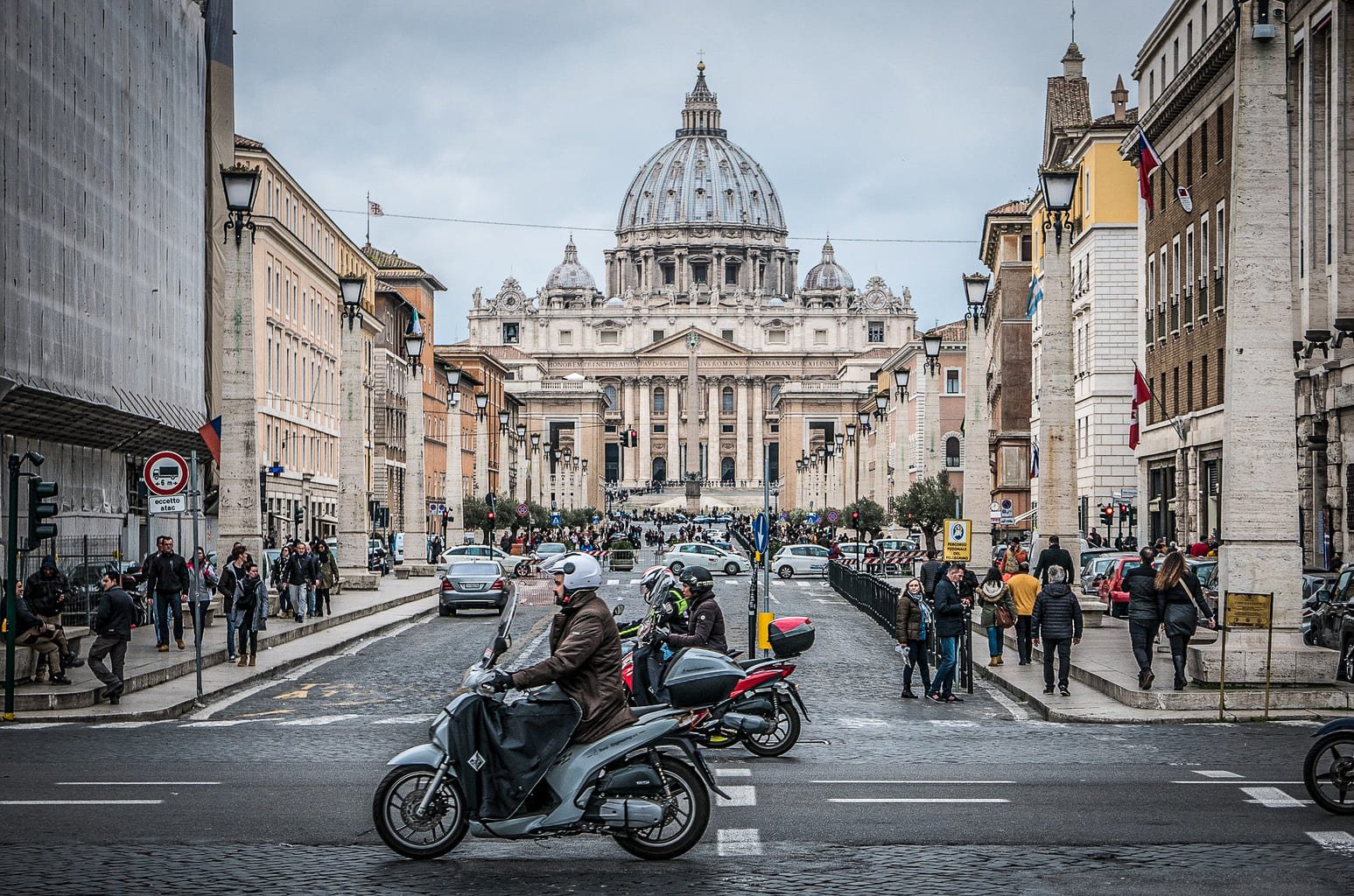 Located in the Vatican City, St. Peter’s Basilica (San Pietro in Vaticano in Italian) is a UNESCO World Heritage Site as well as the spiritual centre of Catholicism.

Who was Saint Peter?

St. Peter (a.k.a. Simon Bar-Jona) is undoubtedly one of the most famous disciples of Jesus.

Considered in the Catholic tradition as the “Prince of the Apostles”, St. Peter was the first bishop of Rome: the popes all present themselves as his legitimate successors.

St. Peter is said to have been one of the victims of the repression of Christians in Rome during the reign of Emperor Nero. According to legend, he was crucified upside down between 64 and 68 AD in the Circus of Caligula and Nero before being buried in a necropolis next to the Circus, at the foot of Mount Vatican.

In 313 AD, the Edict of Milan promulgated by Emperor Constantine put an end to the persecution of Christians and established a period of tolerance.

Constantine then had the Circus of Caligula and Nero torn down to build a monumental basilica dedicated to St. Peter on the very site of the apostle’s martyrdom and burial. The altar of this first basilica was built just above the tomb of St. Peter.

St. Peter’s Basilica, commissioned by Constantine, was consecrated by Pope Sylvester I in 326.

It was in St. Peter’s Basilica, on Christmas night in the year 800, that Charlemagne was crowned “Emperor of the Romans” by Pope Leo III.

To this day, a slab in the Basilica, located a few metres from the entrance, marks the exact spot where the King of the Franks knelt to receive his imperial crown.

From the 4th to the 14th century, the Lateran Palace, located next to the Basilica of St John Lateran, was the official residence of the popes in Rome.

From 1309 to 1377, the popes left Rome and went into exile in Avignon. On their return, they found the Lateran Palace in a very poor state and as a result decided to move to Mount Vatican, near St Peter’s Basilica. But the Basilica was not in the best of states either.

The construction work lasted for more than a century (from 1506 to 1626) and was overseen by some of the most emblematic architects of their time: Bramante, Raphael, Baldassarre Peruzzi, Michelangelo, Giacomo della Porta, Carlo Maderno and Bernini.

The Basilica was finally consecrated by Pope Urban VII in November 1626.

→ It is the largest Catholic church in the world!

Nestled in the magnificent St. Peter’s Square in the heart of Vatican City, St. Peter’s Basilica is a Baroque and Renaissance gem: a must-see for any visitor exploring Rome.

The exterior of St Peter’s Basilica

The façade of the basilica

Designed by Carlo Maderno in the 17th century, the façade is one of the most “recent” elements of St. Peter’s Basilica.

Decorated with two-storey high Corinthian pillars and columns, the façade of the basilica is topped by an attic (upper part) on which stand the statues of Christ and the Apostles.

Note also the inscription: IN HONOREM PRINCIPIS APOST PAVLVS V BVRGHESIVS ROMANVS PONT MAX AN MDCXII PONT VII (In honour of the Prince of the Apostles, Paul V Borghese, great Roman pontiff, in the year 1612, the 7th year of his pontificate).
Don’t miss the balcony where the papal blessing (“Urbis et Orbis”) as well as the announcement of the election of a new pope take place.

The narthex of the basilica

The narthex – a vestibule/porch behind the facade that links the exterior and interior of the basilica – is also stunning.

Take time to look at the equestrian statues of Charlemagne (by Cornacchini) and Constantine (by Bernini) at either end of the narthex, as well as the magnificent mosaic by Giotto, a remnant of the old basilica dating from the 13th century.

Five doors open onto the basilica, including the Holy Door (found in all the major basilicas of Rome and only opens during the Holy Years, once every 25 years) and the central door, known as the Filarete door, which is a vestige from the old basilica.

The interior of the basilica

The monumental nave of St Peter’s Basilica consists of a central nave and two side aisles.

Lined with four massive pillars, the nave is covered with polychrome marble and decorated in a decidedly baroque and abundant style. It is also lined with numerous chapels housing a myriad of statues, each more sumptuous than the last.

On the ground, don’t miss the markers indicating the comparative lengths of other emblematic churches: everything is done to remind visitors that St. Peter’s is indeed the most important building in Christendom.

St. Peter’s Basilica is as much worth visiting for the treasures it houses as for its grandiose architecture. The building is full of richly decorated statues and tombs. Among them, do not miss:

The baldachin of St Peter’s Basilica

Located in the transept, under Michelangelo’s dome, Bernini’s baldachin – under which tomb of St. Peter a.k.a. the “Prince of the Apostles” is concealed – is undoubtedly one of the most emblematic elements of St Peter’s Basilica.

The baldachin is designed in the classical Baroque style and was made from bronze from the portico of the Pantheon. This “plundering”, described by some as a “crime”, earned Pope Urban VIII (Maffeo Barberini) a famous and unflattering maxim: “What the barbarians did not do, the Barberinis did”.

Perched over 130 metres above the ground, the dome is one of Michelangelo’s most emblematic masterpieces and one of the largest domes in the world.

Completed by Michelangelo’s disciple, Giacomo Della Porta, it is illuminated by no less than 16 windows and richly decorated with frescoes.

Do not miss the Latin inscription on the perimeter of the dome (the letters are 2 metres high!): TV ES PETRVS ET SVPER HANC PETRAM AEDIFICABO ECCLESIAM MEAM. TIBI DABO CLAVES REGNI CAELORVM.(You are Peter and on this rock I will build my Church. I will give you the keys of the kingdom of heaven).

The dome of St. Peter’s Basilica in Rome served as a model for St. Paul’s Cathedral in London and the Capitol in Washington.

Visitors can also climb to the top of the dome (for a fee) to admire the view inside the dome and the incredible panorama of Rome.

If you are in poor physical condition, suffer from vertigo or claustrophobia, it is best to refrain from climbing the dome. Even if you take the lift, you’ll still have to climb 320 steps on foot (551 without taking the lift) and take a small spiral staircase that is very steep and narrow.

The choir of the building houses one of the treasures of the basilica: the episcopal pulpit known as the pulpit of Saint Peter, made in the 4th century and later renovated by Bernini. According to Christian tradition, this pulpit was used by St. Peter himself, although some specialists believe that it actually dates from the 12th century.

On either side of the palaeochristian seat, don’t miss the funerary monuments of Urban VIII (by Bernini) and Paul III (by Guglielmo Della Porta).

The treasures of the basilica

The basilica’s treasures (entrance fee) is accessible from the sacristy. It displays a selection of vestments and priestly objects. The visit is not a must and you can skip it without regret.

The Vatican Grottoes are a crypt where many popes, such as John Paul II, were buried.

Their name (grottoes) comes from the decoration, which is reminiscent of artificial caves (grotto in Italian).

Access to the papal necropolis (2nd basement) is limited to a small number of visitors, by reservations only.

St. Peter’s Basilica is located in St. Peter’s Square, within the Vatican City.

St Peter’s Basilica is open from 7am to 6pm from November to March and from 7am to 7pm from April to October. On Wednesdays, when there is a papal audience, the basilica is only open to the public from 1pm. It is closed on 1 and 6 January.

The dome of St. Peter’s Basilica is accessible from 8am to 5pm from November to March and from 8am to 6pm from April to October.

Please note that proper attire is required to enter St Peter’s Basilica. Make sure your shoulders and legs are covered and remember to bring a scarf to cover yourself if you are wearing shorts or a tank top.

To avoid endless lines and not miss a thing, Captain Ulysses highly recommends this guided tour of St. Peter’s Basilica.