In the heart of London’s City district, St Paul‘s Cathedral is thesecond largest cathedral in the world after St Peter’s Basilica in Rome.

👉 Accommodation, flights, activities, city pass … Find all the Captain’s suggestions at the very end of the article!

👉 If you are looking for practical information about visiting St. Paul’s Cathedral, scroll down to the bottom of the article! ⬇️

The history of St Paul’s Cathedral is quite eventful, to say the least! Between fires and Viking attacks, the cathedral had to be rebuilt no less than four times between the 7th and 17th centuries.

Four cathedrals were built over the centuries before the construction of the current Saint Paul’s cathedral. However, they were not the first religious buildings to be built on this site. A dolmen, then a temple dedicated to Diana, goddess of hunting, preceded the first cathedral.

💡 Attention, history lovers! 💡
If you want to learn more about the very rich history of the English capital, Captain Ulysses can only recommend a trip to the Museum of London.
Admission is free! 🙂

Three years after the Great Fire of London, a decision was taken to build a 5th cathedral (if that’s not resilience, then what is!)

The first two projects submitted by the architect were not retained by the Anglican clergy, but third time’s the charm! Wren’s third project was finally approved and construction works began in 1675. 35 years later, St. Paul’s Cathedral was finally completed.

During of the bombing of London in 1940, St. Paul’s Cathedral, which was unsurprisingly easily identifiable from the sky, became a privileged target of the German aviation. Miraculously, the Cathedral came out of the blitz (almost) unscathed and did not suffer any irreparable damage, thanks in part to the mobilization of civilians who saved the building from the flames!

St Paul’s thus became a symbol of hope for all Londoners!

St Paul’s Cathedral remains today intrinsically linked to the history of the country.

💵🤩👍 London Pass & London Explorer Pass 👍🤩💵
Access to St. Paul’s Cathedral is included in the London Pass and London Explorer Pass. Captain Ulysses has a soft spot for the former, which gives access to 80 attractions, including many of London’s most iconic museums and monuments (the Tower of Londonthe Shard,Westminster AbbeyKensington Palace, Tower Bridge,the Churchill War Rooms…): an investment that will quickly pay off if you spend a few days in the English capital!

Wren’s ambition? Designing a singular and innovative building which would leave a mark and redefine the aesthetics of the Anglican Church… A successful bet!

An audio-guide is offered to visitors at the entrance of the cathedral (it is included in the entrance ticket): Captain Ulysses found it very well done and can only recommend it!

📸 No photos 📸
As in Westminster Abbey, photos are prohibited inside St. Paul’s Cathedral.

Vast and luminous, the first floor – including the nave, transepts and choir – is is a perfect example of the Baroque aesthetic.

Be sure to have a look at the organ, located under the dome, the high altar in the form of a monumental baldachin, as well as the ceiling of the choir covered in mosaics.

The dome and the three galleries

The The dome of St. Paul’s Cathedral includes three circular galleries in the form of a balcony. Be prepared, to reach the highest gallery, you will have to climb no less than 528 steps: the view from the top is well worth the efforts!

Located some thirty meters above the nave (257 steps), the Whispering Gallery is the most famous of the three galleries, partly due to its incredible acoustics. A whisper from one side of the gallery is perfectly audible on the opposite side, at a distance of 34 meters (the mechanics are quite similar to those of the theater of Epidaurus in Greece).

If you still have a little bit of energy, you can keep climbing to get to the Golden Gallery, perched 85 meters above the ground.

From the gallery, you’ll enjoy a breathtaking view on London. That said, if you are afraid of heights, it may be better to abstain!

In the basement, the crypt contains the tombs of emblematic personalities of the British history. Among them, the tomb of the cathedral’s architect, Christopher Wren, as well as that of Admiral Nelson (who defeated Napoleon at Trafalgar), the Duke of Wellington (Napoleon’s victor at Waterloo) or the painter Edwin Landseer.

Getting to Saint Paul’s Cathedral

Saint Paul’s Cathedral is located in the heart of the City, London’s business district.

St. Paul’s Cathedral is open to visitors from Monday to Saturday from 8:30 a.m. to 4:30 pm. Sundays are reserved for religious services.

FYI: tickets bought on site are more expensive than tickets bought online. Captain Ulysses therefore highly recommends booking your ticket online beforehand, as it’ll also allow you to skip the lines at the entrance to the monument.

🛏️ Accommodation: Captain Ulysses warmly recommends Booking.com to book your accommodation in London. From youth hostels to luxury boutique hotels: you will no doubt find exactly what you need!
If you’re running on a tight budget, the Captain recommends looking in Paddington or Kensington where accommodations are generally more affordable than in the centre and the location is quite convenient.
If you can afford it, the Park Plaza London Riverbank is a really nice option.
And if you’re looking for a chic boutique hotel in London, the Captain most definitely recommends the Goring: it is an iconic property right in the centre of London.

🎟️ Activities: to book visits and activities in London, the Captain recommends GetYourGuide, Civitatis and Tiqets. Skip-the-line tickets, cruises, guided tours, activities… You’ll undoubtedly find everything you need… and more! Keep in mind that London is a very touristy city: if you want to avoid queuing for hours, skip-the-line tickets are great time savers!

🎫 Citypass: if you’re planning on spending a few days in the capital, Captain Ulysses recommends investing in a city pass which will give you access to the capital’s top attractions. There are 2 options: the London Explorer Pass and the London Pass (which also includes a 1-day hop-on-hop-off bus tour.). These passes have 2 major advantages: the discounts and the skip-the-line accesses. These passes have 2 major perks: the discounts and the skip-the-line accesses.

🚐 Transfers: London is a sprawling city and the airports are quite distant from the city center. If you want to avoid spending hours in public transports to get to your hotel, you should consider booking a transfer from the airport. A car will be waiting for you at the airport and will take you wherever you want in the city centre. Find out more here.

🚌 Local transport: given the size of London, there’s no avoiding taking public transport. The good news is that they the underground and the bus network are quite easy to navigate! You can also opt for a hop-on hop-off sightseeing bus tour, which includes an audioguide and stops at the main attractions and monuments in the city.

✈️ Flights: to get to London, there are plenty of options: planes, buses, trains and even ferries. For your flights, the Captain highly recommends Skyscanner: you’ll be able to compare multiple offers to find the best deal for the dates on which you’re planning on traveling. If your dates are flexible, you will even be able to compare prices over several weeks in order to find THE best deal. London is also easily accessible by bus and train. To book your trips, the Captain warmly recommends Trainline, a platform on wich you can book your train trips in 44 different countries with 207 train and bus companies, including Eurostar.

The Temple of Asclepius & the Theater of Epidaurus
5 min read

The Baths of Diocletian in Rome
4 min read 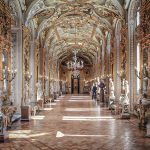