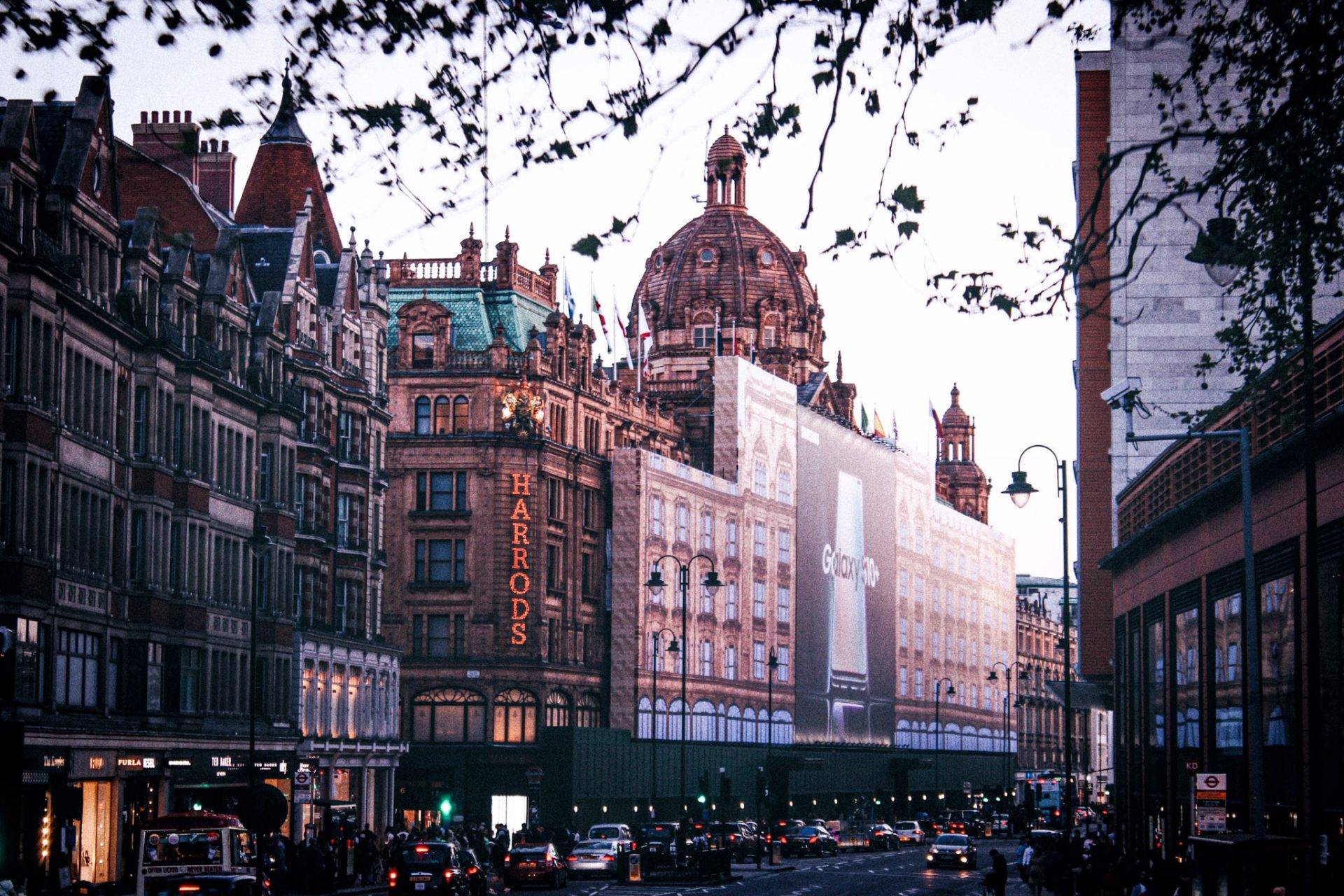 Welcome to heaven on earth for shopping aficionados! With its hundreds of boutiques, each more luxurious than the last, Harrods is the largest of London’s department stores!

Brief history of Harrods in London

The origins of Harrods

The history of Harrods begins in the early 19th century. In 1834, Charles Henry Harrod, a tea wholesaler, opened a grocery store in the East End, a poor district of London.

In 1849, he moved his store to Brompton Road in Knightsbridge. Over the years, he gradually bought up the commercial premises in the vicinity to expand his store. In 1861, his son, Charles Digby Harrod, succeeded him at the head of the company.

On November 6, 1883, Harrods was destroyed in a fire. The following year, a larger store was built on the same site.

In 1889, the company was sold to Alfred James Newton, who quickly took it public. At the turn of the century, major renovations and enlargements were carried out. In the late 19th century, Newton had an “inclined rolling plan” installed (the ancestor of the modern escalator): it was a first in a department store!

In 1914, the company opened a new store… in Buenos Aires! (The Argentinian store closed in 1998 and no longer exists) The company also bought up a number of other London department stores.

In the late 1950s, the company was acquired by the parent company of House of Fraser. It continued to expand the store and grow its reputation around the world.

In the 70’s and 80’s, the store was the target of several attacks by the IRA (Irish Republican Army).

In 1985, Harrods was bought by the Al-Fayed family and separated from House of Fraser. The new owners further expanded the store and created theEgyptian Hall, adorned with bas-reliefs and statues in marble and bronze rococo!

In 1998, Dodi Al-Fayed, son of the CEO of Harrods, disappeared in the car accident that also caused the death of his companion, Lady Diana. Her father had a memorial installed in the Knightsbridge store in honor of the couple.

In 2010, Harrods was acquired by the investment fund Qatar Holdings, owned by the Emirate of Qatar. They installed a new Art Nouveau style escalator and continued to develop the now legendary store.

🤔 Fun Fact 🤔
The store’s motto is “Omnia ubique omnibus“, which means “Everything, everywhere, for everyone”. Well, considering the prices charged in the store, this may be a bit of an exaggeration!

Whether you’re in a spending mood or not, Harrods is a must-see in London! What to see in the famous store? Be sure not to miss:

👉 Harrods façade: first stop before even entering the store to admire its imposing terracotta-colored Victorian façade. At nightfall, it is lit by… 12,000 bulbs: impressive to say the least!

👉 The Egyptian Hall: created by the Al-Fayed brothers, Harrods’s Egyptian Hall is quite unique, with its impressive display of marble and gilding in the purest Egyptian style…

👉 Lady Di and Dodi Al-Fayed Memorial: upon the death of his son in the car accident also responsible for the disappearance of his partner, Lady Di, Mohamed Al-Fayed had a monument erected in memory of the couple. You’ll find the memorial in the basement of the Knightsbridge store.

👉 Shopping at Harrods: clothes, perfumes, jewelry, beauty products, luggage, home decor, etc. Harrods truly is heaven on earth for shopping aficionados. If you’re running on a tight budget, you can stick with the store’s git shop. Why not splurge on the legendary teddy bear which is a symbol of the brand? For the record, Winnie the Pooh was inspired from Harrods’ teddy bear!

👉 Cuisine & gastronomy: Harrods counts dozens of cafes, bars and restaurants, as well as a vast delicatessen department. But be warned, like everywhere else in the store, the prices are somewhat prohibitive!

👉 Harrods Christmas parade: the Christmas parade has become an unmissable event for kids (and adults)! The event includes a parade presided over by Santa Claus aboard a horse-drawn sleigh, followed by a photo session with the children. Be warned, the event is a victim of its own success: remember to book at least three months in advance if you want to meet Santa Claus!

👉 The sales at Harrods: as in any department store, the sales are a highlight of the year. Discounts can reach up to 80%: a great opportunity to treat yourself without (completely) breaking the bank!

Harrods is located at 87-135 Brompton Road, in the upscale Knightsbridge neighborhood, just a stone’s throw from Hyde Park in central London.

Hop-on hop-of sightseeing buses also stop near the store and are quite handy for getting around the capital’s major sites and monuments.

Admission to the store is obviously free of charge. If you want to do some shopping, be prepared to break your piggy bank, unless you’re visiting during the sales! Most visitors are content to buy a teddy bear or an oilcloth shopping bag from the gift store.

💵🤩👍 London Pass & London Explorer Pass 👍🤩💵
If you’re planning on spending a few days in the English capital, you might want to consider investing in a city card: the London Pass or the London Explorer Pass. Captain Ulysses has a soft spot for the former, which gives access to 80 attractions, including many of London’s most iconic museums and monuments (the Tower of London, St. Paul’s Cathedral, Westminster Abbey, Kensington Palace, Tower Bridge, the Churchill War Rooms, the Shard, a Thames River cruise, a day tour on a hop-on hop-off tourist bus…).