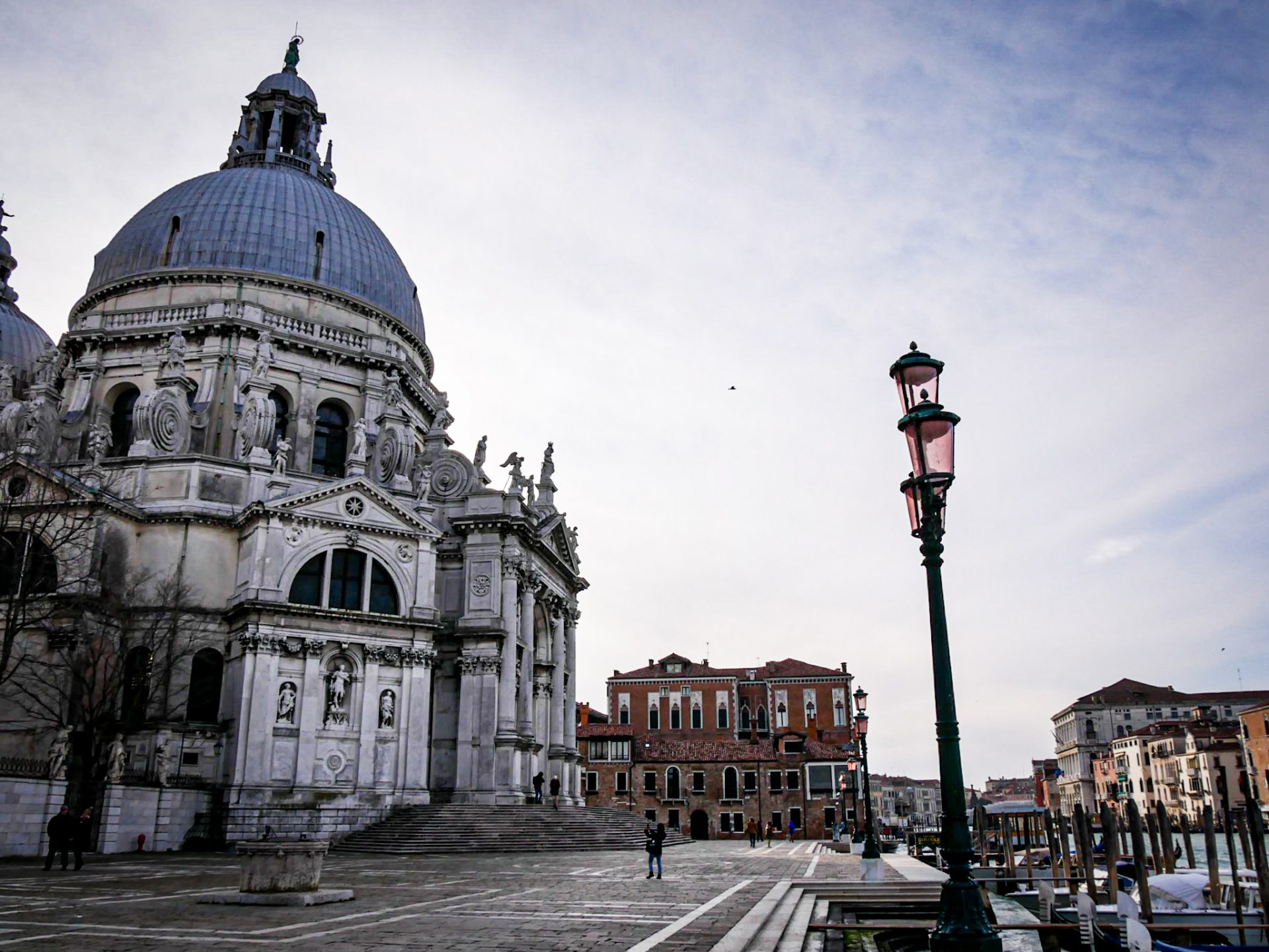 The Basilica of Santa Maria della Salute in Venice

The Basilica of Santa Maria della Salute (or simply the Salute) is one of the most famous religious buildings in Venice. One thing is certain: its monumental white silhouette, nestled on the banks of the Grand Canal,

💡 The Captain’s tip 💡
Want to know more about the history of Venice? Captain Ulysses highly recommends this free guided tour of the city (in English). It’s up to you to choose how much you want to tip the guide!

In the summer of 1630, a plague epidemic broke out in the city of Venice. Within two years, nearly a third of the population of the ‘Serenissima’ was decimated.

Helpless, the Senate decided to call upon the protection of the Virgin Mary and implored her mercy by building a monumental basilica in her honour.

The project, which was entrusted to the architect Baldassare Longhena, began in 1631 and was completed 56 years later.

Santa Maria della Salute was consecrated on November 9, 1687, 5 years after the death of the architect Baldassare Longhena, who devoted over 50 years of his life to the construction of the basilica.

The exterior of the Basilica

With its monumental dimensions, Santa Maria della Salute most certainly does not go unnoticed. The basilica is the Venetian monument resting on the largest number of stilts: 1,156,627 in total!

Its imposing façade, with two domes of different sizes, blends classical and baroque influences. The uniqueness of the basilica’s architecture also lies in its orecchioni, the spiral volutes marking the transition between the façade and the domes.

The Salute’s octogonal layout is an explicit allusion to the Virgin’s crown. The exterior of the basilica is adorned with no less than 125 statues, including a statue of the Virgin Mary on top of the great dome, a statue of St. Mark on the small dome, statues of the four evangelists and countless statues of angels.

The interior of the Basilica

The interior of Santa Maria della Salute is organized around a wide central space surrounded by 6 chapels, one of which is home to an exceptional painting by Titian.

The marble pavement, representing an intricate geometric pattern, is a work of art in its own right.

Be sure to have a look at the high altar, which is adorned with a Byzantine icon representing the Virgin Mary and crowned by a statue of a the Madonna and Child saving the city from the plague.

The Sacristy (€4) is home to a collection of sumptuous masterpieces, including Tintoretto’s famous Marriage at Cana.

And these two numbers do seem omnipresent:

Coincidence? What do you think?

⚓ Hear, hear, sailors! ⚓
Looking for more tips and suggestions for your trip to Venice ? Check out the Capitain’s article on the Best things to do in Venice!

Unsurprisingly, Captain Ulysses – who is a seasoned sailor – insists that the best view on Santa Maria della Salute is onboard a boat, sailing down the Grand Canal.

If you’re interested in navigating the peaceful waters of Venice’s main channel, you can choose between three options:

Getting to the Basilica of Santa Maria della Salute

To get to the Basilica of Santa Maria della Salute, head south of the Grand Canal, a short walk from the Peggy Guggenheim Collection, on the opposite bank of the Doge’s Palace and St. Mark’s Basilica.

The nearest vaporetto station is Salute (line 1). If you plan to use public transport (vaporetto and/or bus) several times during your stay in Venice, Captain Ulysses recommends opting for a transport pass.

The basilica is open to visits every day:

Beware, the sacristy’s schedule is slightly different. It is open:

Admission to Santa Maria della Salute is free. However, you’ll have to pay €4 per person to access the Sacristy.

The Feast of the Presentation of the Virgin

Every year, on November 21, Venetians commemorate the end of the plague with an important religious ceremony: the Feast of the Presentation of the Virgin (Festa della Madonna della Salute).

🛏️ Accommodation: Venice is a very touristy city and there is no shortage of accommodation, but they are generally rather expensive. If your budget is tight, Captain Ulysses suggests staying in Mestre, out of town. Accommodation is much more affordable and buses reach Venice very regularly.
As for mid-scale options, Captain Ulysses highly recommends Hotel Le Isole very well located a few steps from Saint Mark’s Square, this beautiful hotel has spacious and elegant rooms and offers… not to mention that breakfast is very good.
And if you’re looking for a more luxurious option in Venice, then Captain Ulysses most definitely recommends the Londra Palace nestled in a Venetian palace on the Riva degli Schiavoni.

🎟️ Activities: Tickets, guided tours, gondola tours, day-trips… There are plenty of things to do in Venice! But the city is often packed with tourists, which is why Captain Ulysses recommend that you book your activities online and opt for skip-the-line tickets. The Captain suggests having a look at GetYourGuide and Tiqets, which are online platforms specialised in selling tourist activities worldwide.

🎫 Citypass: If you’re planning on visiting all of Venice’s top sights, Captain Ulysses recommends you to opt for a Citypass, which will give you access to a selection of the city’s must-see sights and monuments. There’s a variety of city cards to choose from depending on what you’re looking for. Find out more here.

🚐 Transfers:To get to Venice from the airport, you’ll have three options: bus, vaporetto (orange Alilaguna Arancio line), or water taxi. It’s up to you to choose the option that works best for you! Be aware, however, that the historic centre is pedestrian, and buses and taxis are not allowed to operate there.

✈️ Flights: Venice is easily accessible by plane, train and bus. To book your plane tickets, Captain Ulysses recommends Skyscanner, which allows you to compare countless flights to find the best deal. If your dates are flexible, you can also compare prices over several months to find the cheapest flights possible. Overnight trains are also a great way to save time (and money) ! For more information, visit Omio.