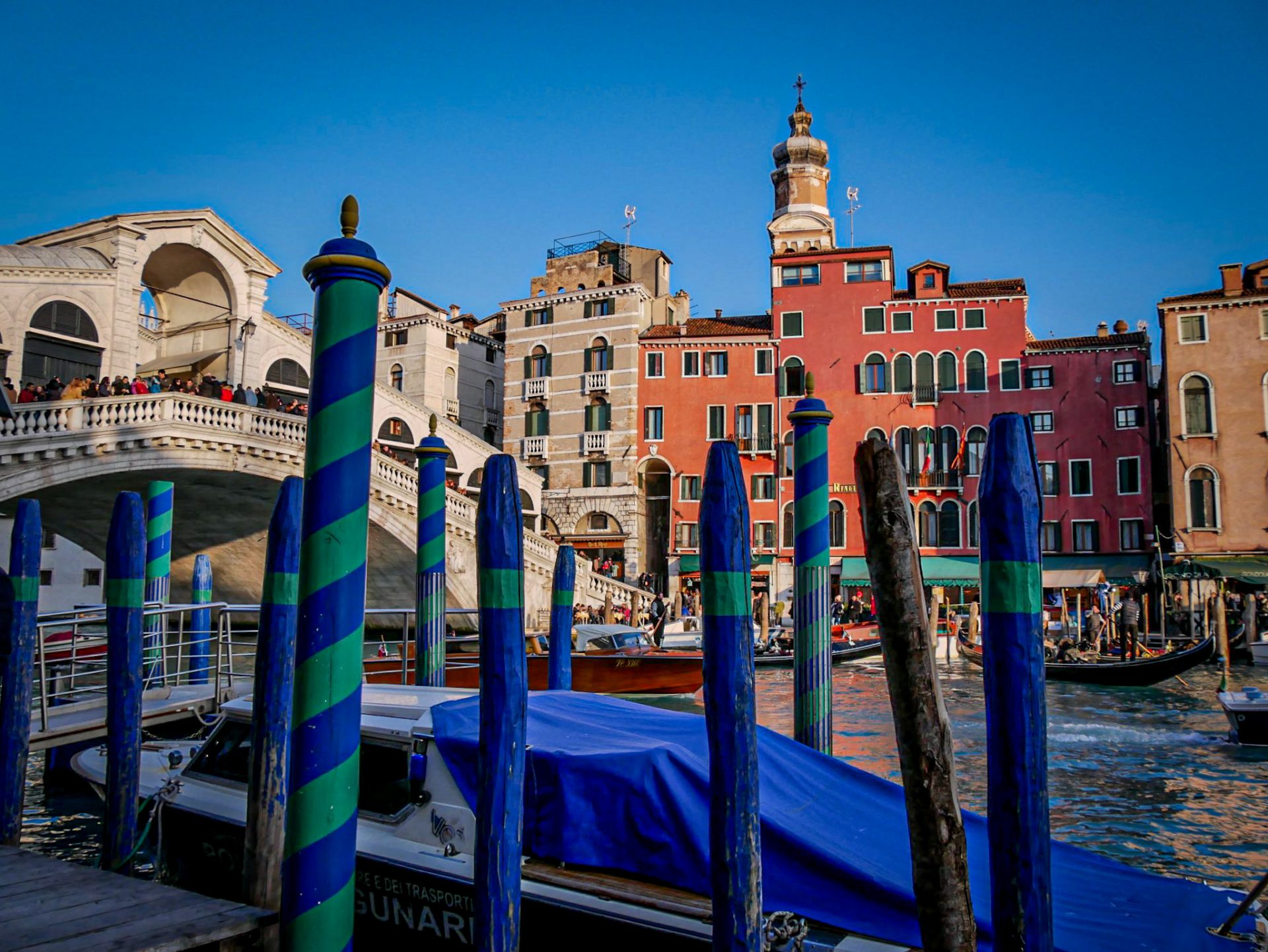 The Rialto Bridge in Venice

Venice counts 438 bridges in total, but one of them is not quite like the others: the Rialto Bridge (Ponte di Rialto) of course!

Want to know more about the history of Venice? Captain Ulysses highly recommends this free guided tour of the city. It’s up to you to choose how much you wish to tip the tour guide!

Looking for a hotel in Venice? Be sure to check out the Captain’s article: Where to stay in Venice? Advice & recommendations

Pou planning your trip to Venice? Be sure to check out Captain Ulysses’ complete article on what to see and do in the city: a Guide to Venice

Brief history of the Corinth Canal

The origins of the Rialto Bridge

Located in the current sestiere (neighborhood) of San Polo, on the left bank of the Grand Canal, the Rialto neighborhood became the economic center of the Doges’ City as early as the 11th century. The Venice market set up shop there in 1097, attracting shops, warehouses, and even the city’s first banks and insurance companies.

However, a challenge emerged as the political center of Venice was located on the opposite bank of the Grand Canal from the thriving economic hub, in the current sestiere of San Marco – where the Doge’s Palace (and the Bridge of Sighs) as well as St. Mark’s Basilica are located..

That’s the reason why the first bridge spanning the Grand Canal – the first original Rialto Bridge – was built in 1172.

The Rialto Bridge before the 16th century

The original Rialto Bridge looked nothing like it does today: it was actually made of a succession of barges and boats with wooden planks laid on top. Every time a boat had to cross the bridge, the planks had to be removed and the barges moved so as to make way. This makeshift solution was obviously far from ideal!

That’s the reason why in 1264, a wooden bridge was built to connect both banks of the Grand Canal. Although better than the first option, this solution soon proved quite flawed as well. The bridge was threatened both by the city’s humid climate (causing the decay of wood) and fire hazards, and therefore had to be restored regularly. In 1444, part of the bridge even collapsed under the weight of a crowd who had gathered to have a look at the bridal gondola of The Marquess of Ferrara.

Following the accident, the bridge was rebuilt, but this new wooden construction was quite different from the previous one: it included two rows of shops, and could be lifted to enable the passage of boats. However, the bridge quickly deteriorated, and Venetian leaders were forced to to opt for a new long-lasting solution.

The Rialto Bridge after the 16th century

In 1551, the Senate of Venice finally decided to build a bridge made of stone. The most famous architects of the time — among whom Palladio, Sansovino and Michelangelo — were asked to pitch ideas for the construction of the new Rialto Bridge.

In the end, the Senate selected the project submitted by Antonio da Ponte. Construction work began in 1588 and lasted 3 years. In 1591, the Rialto Bridge we know it today was officially completed.

For the following three centuries, until the construction of the Ponte dell’Accademia and the Ponto degli Scalzi (Bridge of the Barefoot) in the 19th century, the Rialto Bridge was the only pedestrian walkway across the Grand Canal.

From May 2015 to December 2016, the Rialto Bridge underwent 18 months of intensive renovation and is now (almost) as good as new!

The architecture of the Rialto Bridge

Immediately recognisable with its the silhouette in the shape of a circumflex accent (^), the Rialto Bridge is an architectural masterpiece. Built on swampy land, the bridge rests on no less than 6000 stilts. It is 48 metres long (157 ft), 22 metres wide (72 ft), and 7.50 metres high (24,5 ft).

The bridge is made of three pedestrian aisles:

The ornaments of the Rialto Bridge are simple and understated. However, the figures of the two holy patrons of the city (St. Mark and St. Theodore) appear on each side of the bridge.

The view on the Grand Canal from the Rialto Bridge

From the Rialto Bridge, the view on the Grand Canal is quite simply spectacular.

Captain Ulysses recommends that you stop by the bridge several times during the day to enjoy the panorama in the daylight, at sunset and at night.

But be prepared: the Rialto Bridge is a must-see in Venice and it is crowded day and night.

Guided tours of the Rialto Bridge

Many guided tours in the City of the Doges stop at the Rialto Bridge, but Captain Ulysses recommends one in particular: a walking tour of Venice and a gondola ride, to discover the best of the Serenissima accompanied by a guide.

The view on the Rialto Bridge from the Grand Canal

Could a visit in Venice be complete without a boat tour on the city’s picture-postcard canals? Captain Ulysses thinks not. After all, it is tradition!

Besides, while the view on the Rialto Bridge is beautiful from the mainland, it is even more stunning from a boat navigating down the Grand Canal.

If you’re up for a boat ride on the Grand Canal, you have three options:

A stone’s throw from the bridge, the Rialto Market

It would be a pity not to drop by the Rialto Market while in the area.

Located in the sestiere (district) of San Polo, this market is one of the largest and most famous in Venice. It is a paradise for gourmets!

The Rialto Market is actually divided into three smaller markets:

If you want to find out more about local gastronomy, Captain Ulysses even recommends:

It is located a 5-10 minute walk from St. Mark’s Square. The nearest vaporetto station is the Rialto station, served by lines 1, 2 and N.

🛏️ Accommodation: Venice is a very touristy city and there is no shortage of accommodation, but they are generally rather expensive. If your budget is tight, Captain Ulysses suggests staying in Mestre,out of town. Accommodation is much more affordable and buses reach Venice very regularly.
As for mid-range options, Captain Ulysses highly recommends Hotel Le Isole. This hotel is very very well located a few steps from Saint Mark’s Square and the rooms are spacious and elegant… not to mention that breakfast is very good.
And if you’re looking for a more luxurious option in Venice, then Captain Ulysses most definitely recommends the Londra Palace nestled in a Venetian palace on the Riva degli Schiavoni.

🎟️ Activities: Tickets, guided tours, gondola tours, day-trips… There are plenty of things to do in Venice! But the city is often packed with tourists, which is why Captain Ulysses recommend that you book your activities online and opt for skip-the-line tickets. The Captain suggests having a look at GetYourGuide, Musement and Tiqets, which are online platforms specialised in selling tourist activities worldwide.

🎫 Citypass: If you’re planning on visiting all of Venice’s top sights, Captain Ulysses recommends you to opt for a Citypass, which will give you access to a selection of the city’s must-see sights and monuments. There’s a variety of citypasses to choose from depending on what you’re looking for. Find out more here.

🚐 Transfers:to get to Venice from the airport, you’ll have three options: bus, vaporetto (orange Alilaguna Arancio line), or water taxi. It’s up to you to choose the option that works best for you! Be aware, however, that the historic centre is pedestrian, and buses and taxis are not allowed to operate there.

✈️ Flights: Venice is a city easily accessible by plane, train and bus. To book your plane tickets, Captain Ulysses recommends Skyscanner, which allows you to compare countless flights to find the best deal. If your dates are flexible, you can also compare prices over several months to find the cheapest flights possible. Overnight trains are also a great way to save time (and money) ! For more information, visit Trainline.com.

Credits
View on the Rialto Bridge